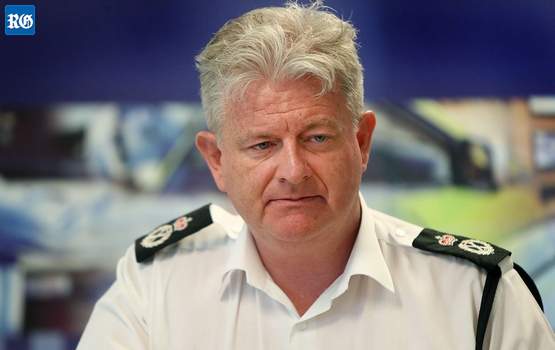 It came from right "out of the blue" to read in this morning's Royal Gazette that Commissioner Stephen Corbishley has resigned with immediate effect.  We were aware that he had recently travelled to the U.K. for personal reasons but this news is a total surprise.

Commissioner of Police Stephen Corbishley has resigned, the Governor said this morning.

Darrin Simons, the Deputy Commissioner, will act in the top job until a new appointment is made.

The Royal Gazette reported this week that Mr Corbishley was overseas for personal reasons.

On his Facebook page Mr Corbishley described himself as a “former Commissioner” of the Bermuda Police Service.

He added: “Writer and academic lecturer in law.”

It was understood Mr Corbishley left the job to spend more time with his family and seek new career opportunities.

In an e-mail sent to BPS staff, seen by the Gazette, Mr Corbishley said: “The past three plus years in the BPS have been fantastic for me.

“Collectively we have achieved many things, been through many challenges and above all served the public, protected victims, and kept Bermuda safe.

“Whilst you may not be aware, the BPS is looked at as a centre of excellence across the overseas territory police services.

“We have achieved that together, and I am very proud to have been part of that journey.”

CLICK HERE for the rest of the Royal Gazette article.

UPDATED ARTICLE -   On Saturday 2nd October the Royal Gazette published a follow-up article about the resignation of Mr. Corbishley.  CLICK HERE to view the article.

The Royal Gazette has also published an article this morning, "Commissioner wanted to focus on communities"  written by Fiona McWhirter outlining Mr. Corbishley's approach to policing in Bermuda. CLICK HERE to view the article.

EDITORS NOTE -  As past president of Expo at the time when Mr. Corbishley first took over as Commissioner of Police, I have to say that he was always exceptionally supportive of the Bermuda Ex-Police Officers Association and went out of his way to assist and help us whenever he could do so.   We wish him well, and  will no doubt have more to say about his contribution to the BPS and to ExPo in the near future.

On behalf of ExPo we would also offer our full support to Darrin Simons as Acting Commissioner and Superintendent Na’imah Astwood as Acting Deputy Commissioner,  in their new roles in leading the BPS until such time as a final decision is made to confirm who will be replacing Mr. Corbishley.