This dapper group of extremely smart young men dressed in their tuxedos were actively involved  one of the most successful and enduring sports events in the history of the Bermuda Police.  We wanted to know what they organised, who they are, and where when the photo was taken.

The event they organised was, of course, our Annual Police Boxing Tournament which was first held in 1969 without the benefit of professional backing or expertise.  The driving force behind this popular event was without doubt Pat McBride who was also responsible for organising our highly successful Tug o' War team, and our first Police Road Race from the PRC to Flatts Village and back.

Pat wrote an excellent article (CLICK HERE to read it) about the First Police Boxing tournament which, in Pat's own words, "was based on the  evening of boxing held at the National Sporting Club in London, which was basically a Gentleman’s Night Out - with strict rules applied during the bouts. Okay, it may be argued that a few of our attendees may not have been “gentlemen” exactly, but we did, however, insist that they dress up in their tuxedos - a dress code that was strictly enforced. We restricted the alcohol to champagne, and smoking to cigars only. I’d like to think that all those who attended our first night of boxing, along with all those dozens of men who have stepped into the ring since that momentous night in 1969, and everyone who has ever attended the annual Police Boxing Tournaments, will be able to look back with pride and fond memories at having been an integral part of the sporting legacy of the Bermuda Police Force.”

Pat McBride had left the Island and settled in Canada by the time this photo was taken, but the Police Boxing Tournament  was held for over 25 years, eventually moving to the Southampton Princess Hotel where it would regularly attract a full house of police officers and civilian guests.

There was one person we knew we could rely on to name  the gentlemen in this group who were all members of our Police Boxing Committee, and that is Davie Kerr, who has a unique record of participating in the Annual Tournament.  He fought on that first evening in 1969, and lost his match against John Balsdon, but they won "Fight of the Night". Davie fought in 10 tournaments with his last fight being in 1981 when he won against Dick Parker and also won "Fight of the Night". According to the local press this bout "was worth all the previous ones that night put together!" As Davie says, "We stood toe to toe for 2 3/4 rounds beating the sh*t out of each other, and I managed to  win.  CLICK HERE  to read Davie's excellent article about his fighting career.

Getting back to this photo, we have named all the Committee members in the caption below, and we believe the photo was probably taken at the Southampton Princess Hotel, but we are not at all sure of the date.

If you can assist us in confirming exactly where and when it was taken please add your comments below this article.  Although we later added more information about later fights to the article written by Pat McBride about that first evening of boxing,  we have never completed the history of our Police Boxing Team.  If you have any  information or photos you would like to see added to Pat McBride's article please let us know in the comments column below, or send themn to us through our ExPo email at This email address is being protected from spambots. You need JavaScript enabled to view it. 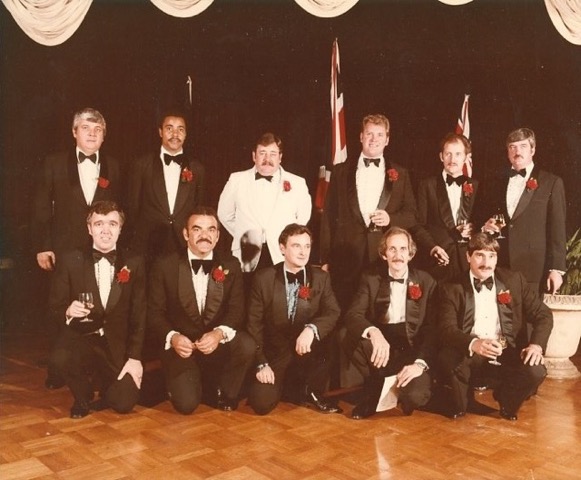 Davie Kerr 1 year 3 months
I believe that there's an article in the "Interesting Articles" section about my boxing career, which covered 10 fights between 1969 and 1982 against John Balsdon, Eddie Bailey twice, Steve Taylor, Angus Brown, Bill Butterworth, Richard Flood, Dick Parker, and two against legendary Mass State Trooper Paul "Bad Dog" Driscoll. Oddly enough my career was an almost perfect circle: I lost my first fight but got Fight of the Night, and I lost my last fight but got Fight of the Night!Editors note - We do indeed have an article about Davie's boxing career on our website which can be found at http://expobermuda.com/~bermyxpo/index.php/lia/113-dkerrboxingIs it possible that Davie has had more fights than anyone else in the history if the Police Boxing Section?

Davie Kerr 1 year 3 months
Incidentally, as it seems that my previous ID's post has gone astray, the participants are:-Back from L:- Merv Willey*, Richie Basden, Howard "Stumpy" Kirkham*, Graham Alderson, Dave Cook, Vic Richmond*.Front from L:- Cyril Plant*, Eddie Foggo*, Neil Anderson, Ron Robinson*, Ken Lewis.* indicates those whom I believe are no longer with us: RIP...Editors note - Don't know what happened to your previous comment Davie, but you're spot on . Anyone woud think you had first-hand knowledge of the boxing events!

Davie Kerr 1 year 3 months
I'm pretty sure that Ken Lewis did pop up at the Sutton Coldfield reunion in Sep '14: Graham is happily hibernating in NE England somewhere, and as far as I know Richie, Cookie and Neil are still alive and well in Bermuda.Editors note - I believe you're correct on all points Davie. I know Dave cook has had some back problems, including an operation last year, because we're been sharing information because I'm experiencing some back problems at the moment. It's an age thing!

Don Urquhart 1 year 3 months
I see my old Belfast pal JC, Ron Robinson in the front row, RIP.Editors note - Correct Don.He was a regular at the PRC foir many years

I think Terry is being a little pessimistic with his 'Sad, only a couple still with us' as I believe that there are still five, who are alive and well, I suppose well is debatable! Richard Basden, Graham Alderson, Dave Cook, Neil Anderson and Ken Lewis, wherever he is!

My point Mr. Taylor was and is that six of the people shown have passed away. Thats all. "couple" is a word used by many and not only as TWO.Shalom.Editors note - I tend to think that saying "only a couple" are still with us is stretching the word couple, but it is sad to realize so many are no longer with us.

Philip Taylor 1 year 3 months
I think Terry is being a little pessimistic with his 'Sad, only a couple still with us' as I believe that there are still five, who are alive and well, I suppose well is debatable! Richard Basden, Graham Alderson, Dave Cook, Neil Anderson and Ken Lewis, wherever he is!

terry 1 year 3 months
Must have been taken on Boxing Day.Sad only a couple still with us.Fond memories of all of them.Editors note - Well done for spotting this Terry. It's actually our next "Who, Where and When" photo to be featured but youlre on the ball. It's quite a group who were all instrumental in organising what became probably our greatest ever annual sporting event.