We thought this was  a group of real characters in this "Group of Eight"! We wanted to know they, where and when was it taken, and what did they all have in common at that time?

We are awaiting confirmation of some of the details but they were all serving at the time of this photo as Parish Constables, and have been correctly identified as Howard "Stumpy" Kirkham, Ron Beech, Wilbur McLean, Barbara Clarke, Bernie Joinville, Dai James, Erskine "Choe" Trott and Bob Anthony.

We are still compiling information and waiting for more details to pin down exactly when this photo was taken in the main hall at the PRC.  Some thought it was probably taken in the mid to late 1970's but I believe it was probably taken sometime in 1982 although that date is by no means definite.  On checking our ExPo  records we I see that "Stumpy" Kirkham was appointed as Pembroke West Parish P.C. in March 1980 and remained there until June 1982r\. There is nothing else in Stumpy's record to indicate that he served as a Parish P.C. either before or after that time period.

Dai James worked for several years as Southampton Parish P.C. starting in 1974, but in March 1980 he became the Paget Parish P.C.

Bernie Joinville was appointed as a Parish Constable in Central Parishes in February 1982 and spent approximately 3 years in Parishes.

Unfortunately I don't have copies of the orher files at hand, but based on the above information it appears that this photo was likely taken sometime after Bernie joined Central Parishes in February 1982, and before Stumpy was transferred out of Parishes in June 1982 because Dai James was also a Parish Constable at that time.

We will definitely receive more information about this photo and will post it to the article as we receive it. 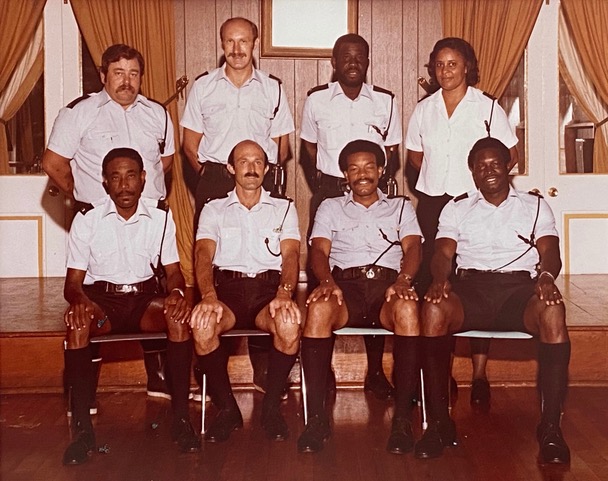 terry 1 year 7 months
Me thinks your "Ronnie Boggan" should read Ronnie Beach.Sholom.Editors note - Many thanks for spotting that Terry. Will make the correction.

George Rose 1 year 7 months
Could the missing man be James Howard?Barbara Clarke worked Pembroke Parish (East)if there were two Constables in that parish.Ediitors note - It's is definitely Wilbur McLean as identified by Mark Clarke on our Facebook page a couple of days ago.

Davie Kerr 1 year 7 months
I always associated Dai James with S'ton and Bernie Joinville with Warwick. Barbara Clarke had Paget, Ron Beech had Devonshire, I think Choe and Bob shared Pembroke East and Stumpy and the un-ID'd man (who I now think is Wilbert McLean) had Pembroke West. However, as I know that Central had 2 PCs per Parish, I assume that Dai & Bernie must have fitted in there somewhere. Who would have been Central Parish Sgt at the time? I know it was Wayne Perinchief during my brief spell in Devonshire late '73-early '74, and I'd date this pic as mid-'70s.I'd guess that it was taken in the main hall of Prospect PRC.

terry 1 year 7 months
Wilbur McClean is your missing man.Editors note - Spot on Terry. Mark Clarke checked out the photo and isdentified the guy next to his mother, Barbara, as Wilbur.

Davie Kerr 1 year 7 months
Back from L:- Howard "Stumpy" Kirkham, Ron Beech, I think Laurie Phillips, Barbara Clarke.Front from L:- Bernie Joinville, Dai James, Erskine "Choe" Smith, I think Bob Anthony.Possibly Central Parish PC's at the time, although I always associate Dai with S'ton Parish...All correct except the guy you thought might be Laurie Phillips isn't Laurie. Mark Clarke checked out the photo on our Facebook and assures us that the young men next to his mother is definitely Wllbur McLean. Yes, it's a group of Patish Constable but can anyone say when this photo was taken and which Parish did each person work in?

terry 1 year 7 months
Easy.I'll let others solve this one.