We had just published this photo elsewhere on our website and wondered if you can find it.  But we also wanted to know who, where and when, as usual. We don't usually do this but we had to disqualify one person from giving us all the answers  for at least 48 hours because he was too closely connected with both the photo and the team and he would, without question, know all the answers!

We are referring to our "Kilt Wearing Walking Book of Knowledge" Davie Kerr,  who completely lived up to expectations by letting us know that this was the Prospect Football Club in the Commercial League Cup Finall at the National Stadium probably around the 1977-78 season. Davie kindly provided us with all their names, and even included asterisks for those who were civilian players.

Davie mentiojned that our good friend, the Late Vic Richmond was the team manager, and Jimmy "The Wop" Costello was team trainer.  We have recently reported that Jimmy hasn't been so well and was staying at Westmeath Home in Pembroke. Our latest report was that he was doing quite well and was hoping to come out as soon as he can after the coronavirus pandemic settles down.

I think that was Prospect FC in a Commercial League Cup final at the old National Stadium pitch (which many people including me think should never have been torn up anyway, but that's another story!), probably around '77-'78, and the people are:-


Bernie and I played together for Bermudiana FC '73-'76, but oddly enough I have no recollection of him playing for Prospect! 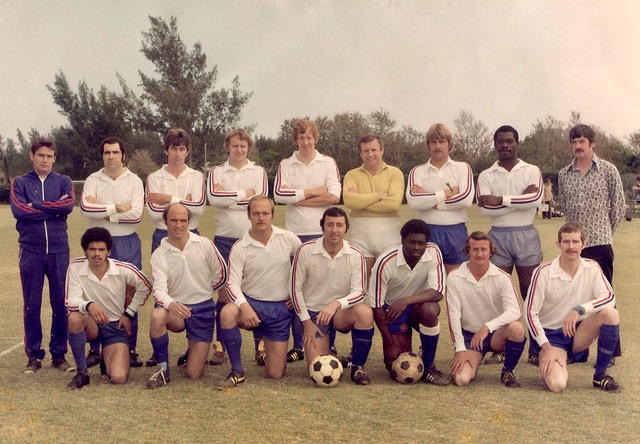 Davie Kerr 2 years
Incidentally, it may interest you to know that the pitch there was known as The Carpet as it was so good, and no less a person than Bobby Lennox of Celtic & Scotland classed it along with Wembley, and the Stadium of Light in Lisbon, as one of the three best pitches on which he'd ever played: high praise indeed!

Davie Kerr 2 years
OK here goes.I think that was Prospect FC in a Commercial League Cup final at the old National Stadium pitch (which many people including me think should never have been torn up anyway, but that's another story!), probably around '77-'78, and the people are:-Back from L:- Jimmy Costello (trainer), Derek Medeiros*, Bob Henderson*, Paul Eurell, Keith Hazell*, Davie Kerr, Paul Wakefield*, Archie Husbands, Vic Richmond (manager).Front from L:- Ronnie Smith, Gerry Benson, some Somerset bloke who wishes to remain anonymous but whose initials are Steve Smedley, Ray Bell, Bob Anthony, Bernie Gay*, Eddie Davies.* = civilian players.Bernie and I played together for Bermudiana FC '73-'76, but oddly enough I have no recollection of him playing for Prospect!Editor s note - Many thanks Davie. I do believe you have them all pegged!

Terry Cabral 2 years
Oh!!! I did get Steve Smedley on the Facebook page. So 1 point to me.Editors note - Well done Terry.

Davie Kerr 2 years
OK, OK, I can take a hint!I'll get back to you by the weekend...Editors note - You are our "Mr. Totally Reliable" and I always look forward to your input Davie. The rest of the guys have had a couple of days to figure out who is in the time so please fire away.,m

Steve Smedley 2 years
Your usually infallible source might not recognize me. He failed to do so the last time that I submitted a photo (Scenes of Crime Course at the Training School)!Editors note - We shall see!