Although most of our members may never have visited this establishment it was an icon for many years at one end of the Island and no doubt holds some fond memories for patrons who sat on those stools!  We wanted to know where it is, who is the barman, and perhaps a little about your personal recollections of the location.

We quickly received two responses identifying the location, one came from Nick Hall in the U.K by email, and the other from Terry Cabral which appears in the Comments section below this article.  Terry not only identitfied the bar but also added that he used to live almost on top of it.  It is, of couse, the Gunpowder Tavern, and Terry correctly called it Gunpowder Cavern/Tavern because quite a few people also still call it Gunpowder Cavern even though I believe the correct name was Gunpowder Tavern.  Davie Kerr has since written to say he also thinks it was the Gunpowder Tavern.

Mike Burke also responded by email and wrote as follows:- " I recognize the bar as the Gunpowder Cavern, an interesting place to explore and it also had a nice dining area in the 50s and 60s.  Sorry, but I don't know the bartender's name.  Another connection concerns the arrested vessel 'Arosa Star', late l950s, when one crew member (Christian Fieldhausen... I think that was his name) took over the running of the establishment.  The Cavern was owned by a woman but I don't remember her name.

But the person who sent us this excellent photo, John "Alfie" Fox who served here in  the Bermuda Police from 1962 - 1964,  has very good reason indeed to remember the Gunpowder Tavern.  Alfie had been posted to St. George's and his first recollection of the tavern was during the early morning hours of 27th October 1962 when, following more than a few drinks there he had retired to bed in St, George's Police Barracks only to be awakened to attend an aircraft crash at Ferry Reach where a USAF Stratojet had crashed into the property owned by Lord Astor.  "Alfie" no doubt sobered up quite quickly!  His second, and more vivid recollection of the Gunpowder Tavern occurred on 12th April 1963, when he happened to meet an attractive your Canadian nurse named Ruth from KEMH who was visiting the bar accompanied by a friend.  Alfie and Ruth struck up a conversation, and the rest, as they say is history.  "Alfie" left Bermuda shortly afterwards and followed Ruth to Canada where the two were married, and this year they celebrated 51 years as a happily married couple.  You can read more about Alfie in our Then and Now column at http://expobermuda.com/index.php/tan/376-john-alfie-fox

Just one more comment about this photo:-  I have checked the internet quite thoroughly for other photos of the interior of Gunpowder Tavern but cannot see any others that so clearly show the interior as this one does.  So many thanks Alfie for this excellent photo taken more than 50 years ago.  I believe the premises closed in the 1970's and is now derelict.

Editors note - We will continue to search for the idenity of the barman and will publish it if we are successful. 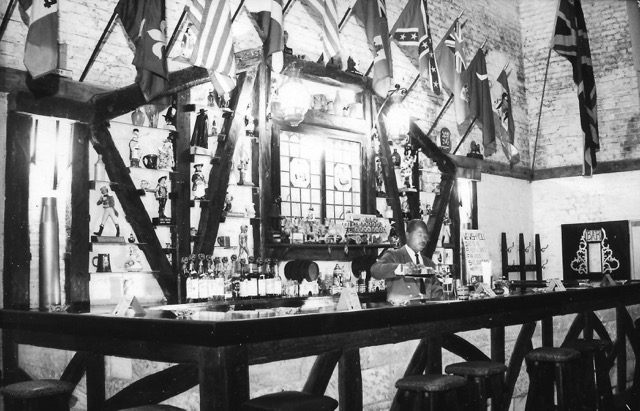 Greg 4 years
I can confirm that the Gunpowder Cavern/Tavern was open when I discovered it in 1983. I recently thought about going back to Bermuda and it was one of the first places I wanted to go back to because I thought of the place as an amazing find as I was just driving a scooter around the island. At that time their was little signage to say there was a bar inside it wasn't until we got inside that we discovered a bar.Editors note - Many thanks for your comments Greg, just wondering if you are a former Bermuda policeman.

Dave Adam 5 years 5 months
The barman was Henry Darrell, the piano player was Earl T Roach, he also played drums (not at the same time). The owner was Ruth Diel.Editors note - Dave obviously has an excellent memory, especially for the Gunpowder Tavern! He has also written separately to say that he used to work with an ex-Royal Canadian Navy member who remembered visiting the "Gunpowder". Dave recalls that whenever the RCN was on exercises a Royal Navt submarine would often come into St. George's for "R and R" and would keep the St. George's Police busy throghout the nights they were in port.

Terry 5 years 9 months
The last person to run/operate the Tavern/Cavern was the late Jimmy Williams MP.He also owned as we all know the Pub On The Square and had shares in numerous other establishments.I left Bermuda in 1991 and the topic of conversation had just closed 2 years earlier.Editors note - Thanks for that information Terry. I had no idea that Jimmy Williams was the last owner/operator of the Tavern but knew he owned The Pub on the Square. He was quite a character and always clsoely associated with St. George's.

Davie Kerr 5 years 9 months
I've just noticed that you're of the opinion that the Cavern closed in the '70s: I'm open to correction, but I'm sure it was still functioning in the mid-'80s as I remember attending a couple of medieval feats there.Editors note - I was looking for any information about when the Cavern closed and would not dispute that it may have still been open in the 1980's. Not sure though about medieval feats (duals with lances?!) - or were they fetes?

Keith Hatfield 5 years 9 months
The group photo in my 'then and now' was taken in the Gunpowder Cavern. The barman is Henry. There used to be an african american pianist who was literally in residence there - his name was Wilf and he was a keen Duke Ellington fan. St. George's Mess residents used the Gunpowder as a focal point. It was very popular with tourists and there were many occasions when the Mess "choir' entertained them with 'colourful' Rugby songs - it kept us in Becks.Editors note - Thanks for this information Keith. I'lll try to find out Henry's last name. I realized that your group photo was taken in Gunpowder Cavern but this is the first and only photo I've ever seen that show such detail of the bar.

Trevor Menzies 5 years 10 months
Sure is Gunpowder Cavern as Davie guessed. This was St.George's 'Police Club' prior to the Eastern Division getting its' own facility.

Davie Kerr 5 years 10 months
My guess would be the old Gunpowder Tavern in St G...

Terry 5 years 10 months
Gunpowder Cavern/Tavern.I used to live almost on top of it.