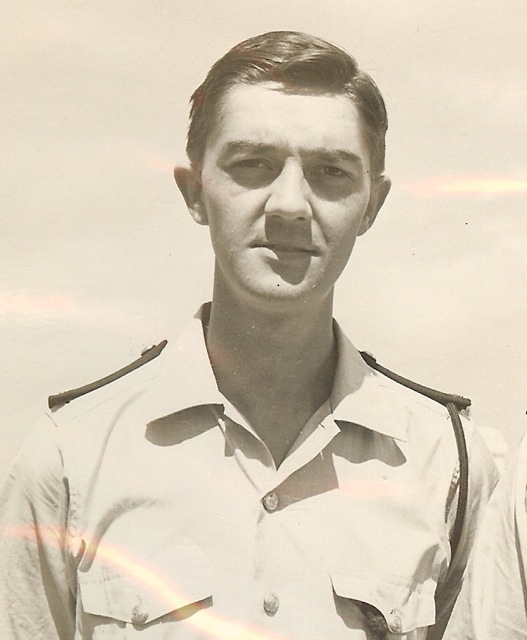 First off let me salute all that worked on this website; in this modern age of technology it is so simple to communicate with ease. I look forward to reading about and reacquainting with many of you.

My first memory as a youngster in England was my favourite pastime of laying on the grass watching planes fly overhead and wondering what it would be like to fly in them. I can also remember vividly being placed in a Spitfire cockpit by my Dad and knowing with certainty that one day I would be a pilot!

After completing my formal schooling I was the last group ever to be called up for National Service. From there I attended Dartmouth Royal Naval College and was in the Fleet Air Arm. I had hoped to continue my flying in civilian life but there was little opportunity at that time in England. One morning I was on a stairway going to work and saw a close friend of mine looking very stoic and pallid and thought if this is how my life is going to pass I needed to make a change pronto. Before long I was at The Angus Steak House being interviewed for the Bermuda Police Force and even in a shorter span saying goodbye to my family with my father’s last words being, “Whatever you do, don’t come home married to a native!” 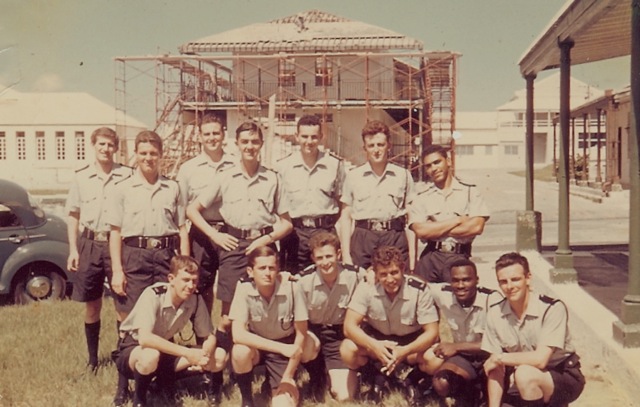 I arrived in 1964 and after passing through the Training School I was stationed in Hamilton doing the usual duties of a new PC walking the beat, guarding Government House and directing traffic from The Bird Cage until I was transferred to Traffic where I remained for most of my contract.

To this day the smell of rum induces vivid memories due to all the rummies we encountered “in backatawn”.

I was one of the unlucky ones to be involved in and injured in the BELCO riots; sometimes when I am tired can still feel the pain from my injuries.

One funny memory was the first day I was sent out on patrol riding a motorcycle, I was intimidated in case I looked a fool trying to put the bike on or off it’s stand so spent the entire shift riding around and keeping clear of any emergency calls! However, that soon passed and actually I am now the proud owner of a Harley Davidson.

‘Nobby’ Clarke took a real shine to me from day one and had my interests at heart. Not too sure if it was on my own merit or the fact that he was a great friend of Penny’s Uncle Charles (Bidwell) who was a former PC with Nobby in the good ole days! 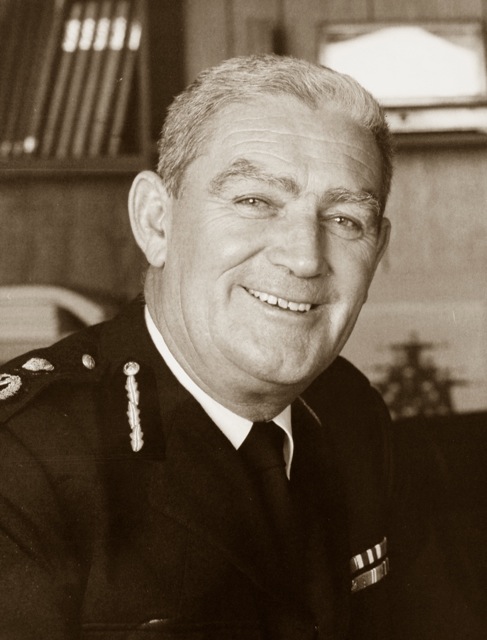 On the lighter side I enjoyed being part of The Police Drama Group, acting in “Seagulls Over Sorrento,” “Arsenic and Old Lace,” and “Journey’s End”. Many lifelong friendships were made as we all partied hard! Not to mention the great parties throughout our time. How many remember when we resurrected the catacombs under the Police Club in Prospect? 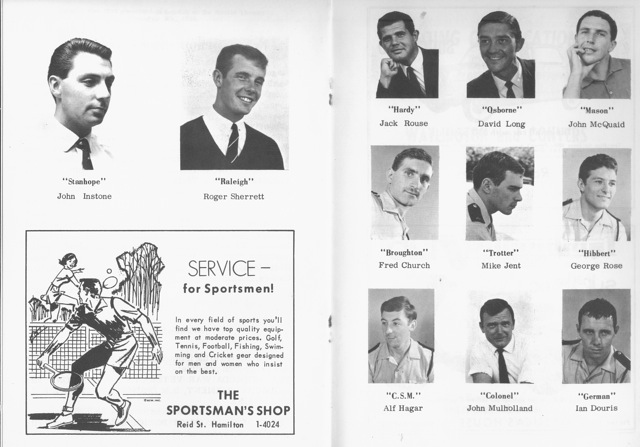 Programme notes for Journey's End  performed
by the Police Drama Group at City Hall Theatre
…. And yes, I did marry a native; Penny Stevens and we have been happily married for 45 years this April. 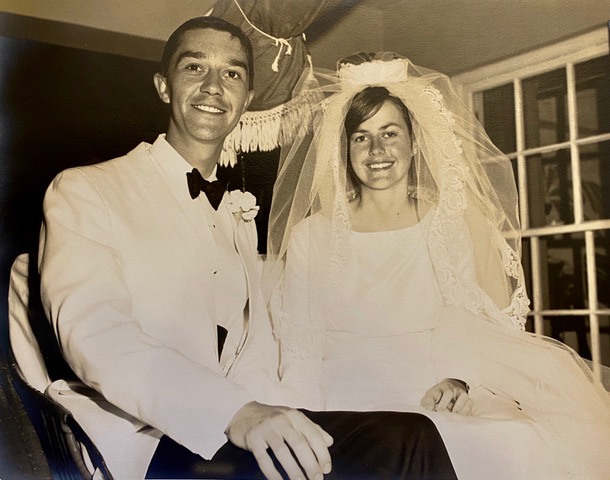 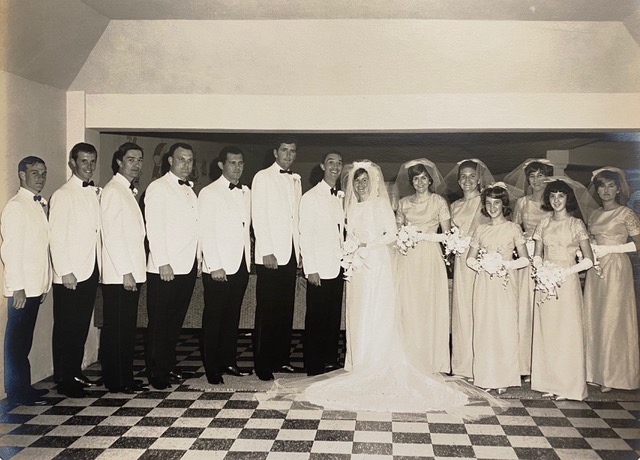 In 1967 I left for Florida with PC Colin Finnegan and PC Terry Lambert to enroll at a reputable flight school with hopes of an aeronautical career (neither Colin or Terry followed in my footsteps). After obtaining all the necessary training I started out as a flight instructor to build up my flight hours. My career started with flying corporate jets and I later joined Continental Air Lines and retired as Captain in 2000, when I reached the mandatory retirement age of 60. I can honestly say that I enjoyed every minute of flying and was thrilled to be paid doing what I loved most. 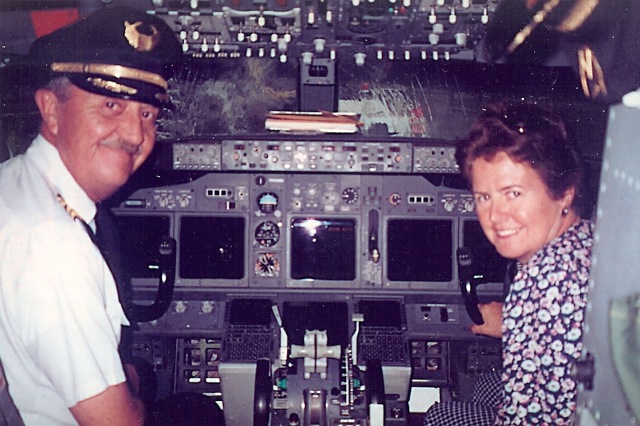 On retiring I found that I needed more than playing golf and chasing Penny around the kitchen so volunteered with the local Fire and Rescue Service, I went back to studying and obtained my EMT license and continued as a medic. I also enjoyed driving the engine. Unfortunately the more I did the more they expected of me and it really cut into my leisure hours so I decided it was really time to hang up another hat.

We live in Daytona Beach, Florida in a very unique gated community called Spruce Creek Fly-In. Most residents fly or play golf or both! Our entrance sign says it all “Watch for children (and adults) playing”. We have our own private runway with 17 miles of taxiways allowing the planes to taxi to and from their hangar attached to the pilot’s home built in the same architectural design. We have over 600 airplanes, a microcosm of the entire world of recreational flying. Antiques, homebuilt, aerobatic, motor gliders and war birds abound, even hot air balloons. They range in size from little cubs to executive jets.

Our daughter Sandra is married and doing extremely well in her profession, Director of Nursing. We have a two-year-old grandson, whom we just can’t get enough of! He too is very enthusiastic about aviation; we’ll see what his future brings! 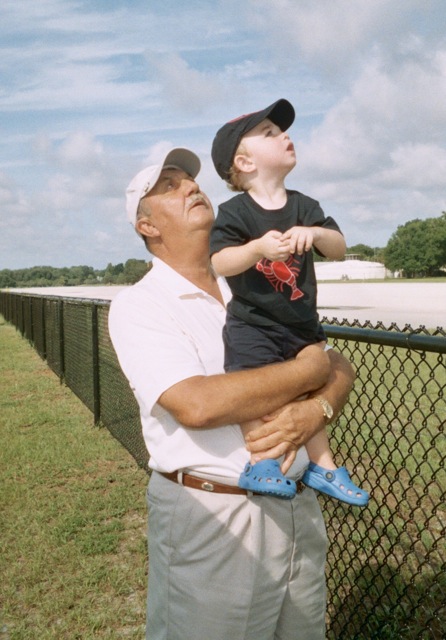 Dave with grandson, Brandon, a pilot-in-training

We spend most of our time playing golf; we have the convenience of driving our golf cart from home to the club. We also enjoy Disney and all the theme parks, which are a stone’s throw away.

We enjoy life to the fullest and hope that anyone of you coming our way will drop in and say hello.

Editors note -   In June 2020  we wrote an update on the situation here in Bermuda following the first wave of the coronavirus pandemic, and we invited our ExPo members around the world to write and let us know how they are faring in these most difficult of times.  The first couple to respondk were Dave and Penny and here is what they wrote:- 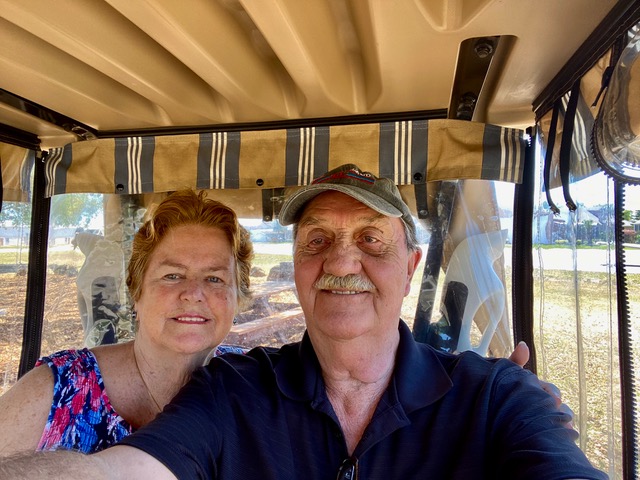 David and Penny Long out on the golf course

"Roger has asked me and others to write something about how we are managing through this devastating pandemic: Well, as I now fit in the octogenerian age and Penny not far behind with a compromised immune system we decided to isolate ourselves as suggested by the President and his team led by the unflappable Dr Fauci, that being mid-March and we are pretty much staying in that same mode today! Most know the curve had flattened in the US and individual states were opening up, all was looking promising until Florida and others opened their bars and beaches urging masks and self distancing at which time all hell broke loose and our cases spiked as the suggestions were not upheld by the younger crowd and unfortunately the cases are still climbing.

We live in a gated community so it has not been as isolated as most areas restricted to home. A handful of years ago we scaled down our home and moved about 3/10 of a mile away and basically changed our view from our pool to the golfcourse. 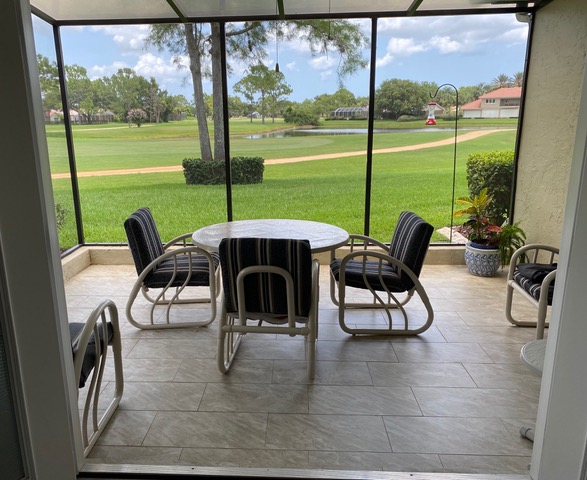 Living close to the golf course!

Many stop by our lanai to visit, self distancing by remaining in their golfcart and we too go for an “airing out” driving around our community on our cart stopping to say hello as we pass familiar faces. We have been so fortunate to sit idly and watch a family of Sandhill Cranes from babies to trying to take flight; Blue birds and Cardinals nest; hummimgbirds flitting by; hawks catching their prey; many song birds outdoing each other and watching grass grow! My sock drawer is in order, numerous books read and more TV than we would like to admit to and too many naps, not to mention looking like rock stars with masses of unruly hair.

I have been doing our immediate shopping with marked out social distancing lines, one-way arrows, mask wearing employees and thankfully most shoppers.The employees are constantly cleaning giving a sense of security. In the beginning the shelves were almost bare except for Ex-Lax and Rice Cakes but fortunately soon began returning to normal, well almost! Penny never too sure what product I will walk in the door with!

I do not know how we would manage with out social media especially FaceTime. It has kept us in constant touch with our daughter, grandchildren, and Penny’s sister in England. We also have made many phonecalls to keep in touch with friends and of course emails, texts and messaging. Unfortunately our daughter being one of the frontline workers as Director of Nursing contacted Covid and was extremely ill with her symptoms lingering for a long time, it was so worrisome being so far away.

Like you, we will both be happy when we can feel free and move about like we were once used to. Until this time we wish you all a healthy and safe re-entry to the life we love and cherish.

Ian Pooles 5 years 7 months
Hello there, I am an old friend of your brother Graham who we believe is in London on Canada. Would you send my email to him as would like to reconnect. So happy you have such an amazing life. Ian Pooles originally from England living in Toronto.Editors note - Hi Ian. Will pass on your message nd email address to David Long.

David Long 7 years
Great to reconnect after all these years! 50+ years! Thanks Roger for passing the message on.Editors note - Thanks David. This is the great advantage of the internet. We have quite frequent messages from people trying to make contact with old friends who spent time in the Bermuda Police.

Joan Sievwright 7 years
Hello DavidJust could not resist getting in touch. I am a great browser of the internet. Who am I? Remember Downside Crescent, Belsize Park? You had a friend called John Leek. I was Joan Eadie then.I will be on holiday at Fort Myers Beach next month. A long way from Daytona Beach though.You have had a most interesting life and the decision to leave London and join the police force in Bermuda was most definitely the right one.Best wishes.Joan