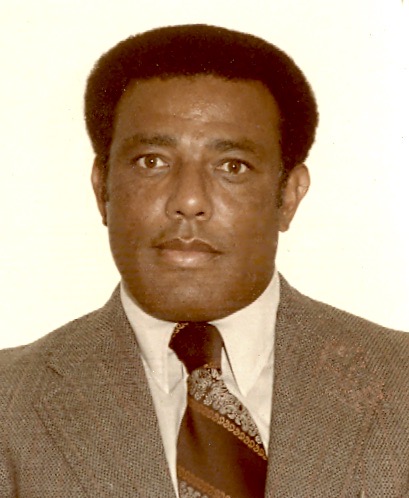 EDITORS NOTE -  In September 2022 we heard that our good friend and former colleague retired Inspector Dudley Swan  has been in failing health  and had been admitted to the Extended Care Unit at KEMH.  I had been working on an article about Dudley for our “Then and Now” column and was due to interview him before publishing the article.  In view of his condition the decision was made to publish this article sooner rather than later in our "Then and Now" column which is usually used to record the reminiscences of those who are still with us.  We did so on 17th September.  Sadly,  Dudley passed away on 24th December 2022 and his funeral was held on 9th January 2023, at which time the decision was made to post this article in our Hall of Fame.

The last time I spoke with Dudley just a few months ago he was telling me about a recent visit he took to TCD  to re-take his driver’s test.  When his name was called, Dudley jumped up and literally ran over to the examiner who thought he must have had the wrong person because “90 year old’s don’t run across the TCD yard”.  Dudley passed the test with no problem – at the age of 93!

Dudley was born on 13th July 1929 in St. George’s, the son of Fielding and Mayalene Swan who also had four other children, Arnold and Vanosdelle, and Eunice and Clara. 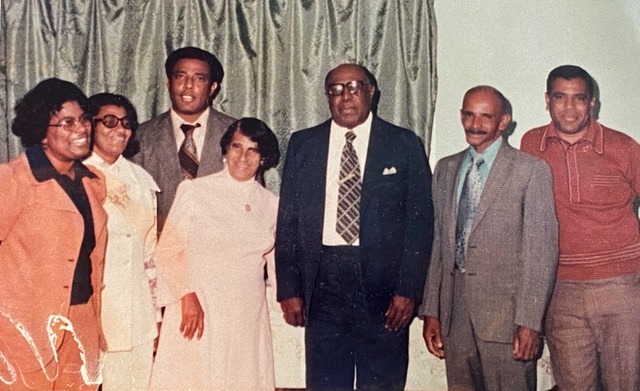 Dudley with his parents and siblings
(l-r)  Sisters Clara and Eunice, parents Mayalene and Fielding,
and brothers Arnold and Vanosdelle

After leaving school Dudley started working in carpentry but he decided that was not the career for him and he wanted to be a policeman.  He worked for a while for the U.S. Armed Forces at Kindley Air Force Base, but he made a decision that was to change his life when he applied for and was accepted as a police officer on 16th July 1951. 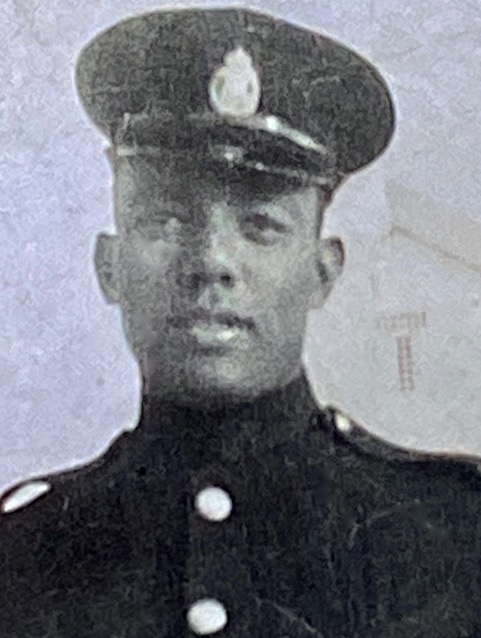 When Dudley joined the Police Force there was no police training school in Bermuda so new local recruits would spend a few days at Hamilton Police Station getting some very basic instructions, while recruits from overseas would have attended a 3-month course at the Police College at Millmeece in Staffordshire prior to arriving in Bermuda.

Occasional training courses were held on Island for already serving police officers, with instructors brought in from the U.K Police Training Schools for several weeks.  Here is such a training course and among the attendees is young P.C. Dudley Swan. 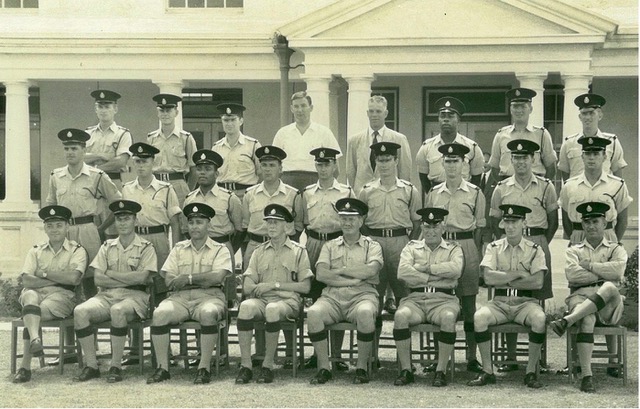 Dudley’s first posting was to Eastern Division which would be familiar territory to him, having been born and raised in St. George’s. After a few years on the beat he became a parish constable and was then transferred to Eastern CID where he served for many years. 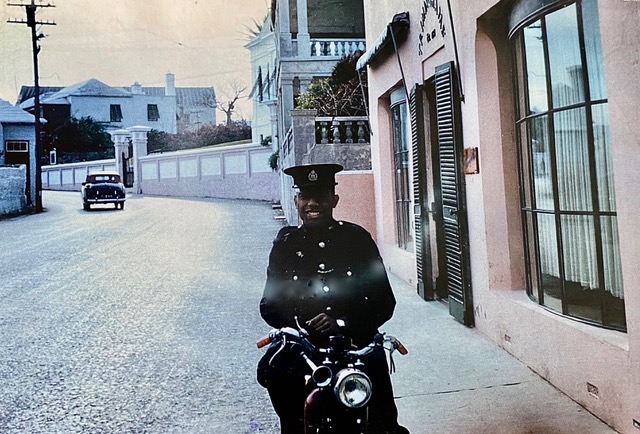 P.C. Dudley Swan on his motor cycle
on York Street on a fairly quiet day!

As a young police officer Dudley met the love of his life, Marlene Wingood, and the two were married at St. James’ Church in Sandys Parish, on 21st April 1954. 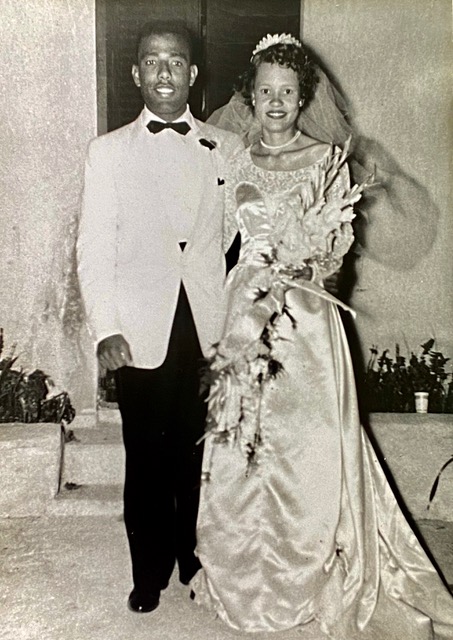 Dudley and Marlene at St. James' Church
on their wedding day

By coincidence, Marlene’s sister, Lillian, had also married another young police officer, Gladwin “Doc”  Hall, in 1953.  Lillian and Marlene were the sisters of Hilton “Jellybean” Wingood, and Hilton followed his two brothers-in-law into ‘law and order’ when he joined the Police Force in March 1955.

Dudley attended the Detective Training Course at Bishopgarth, Wakefield, in 1967 and was promoted to Sergeant on 1st May 1967 becoming the Officer-in-Charge of St. George’s CID. 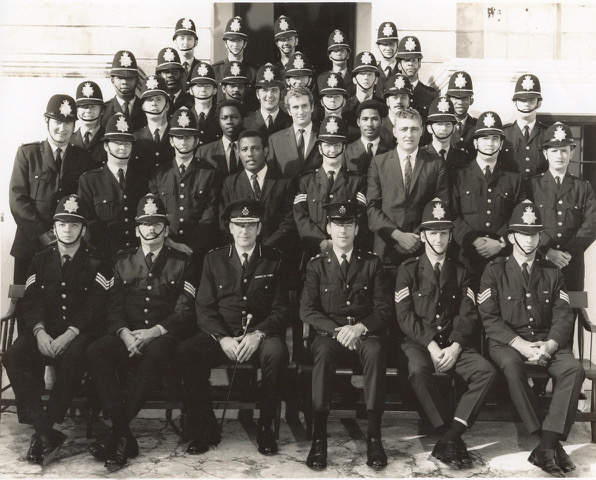 Although not an active sportsman Dudley played cricket for Eastern Division, and he was a passionate “Blue and Blues” fan of St. George’s Cricket Club as was his father who had been President of St. George’s Cricket Club.  This was in contrast to Dudley’s wife, Marlene, who was born and raised in Somerset and has continued to this day to wear the red and blue of Somerset Cricket Cup during Cup Match! 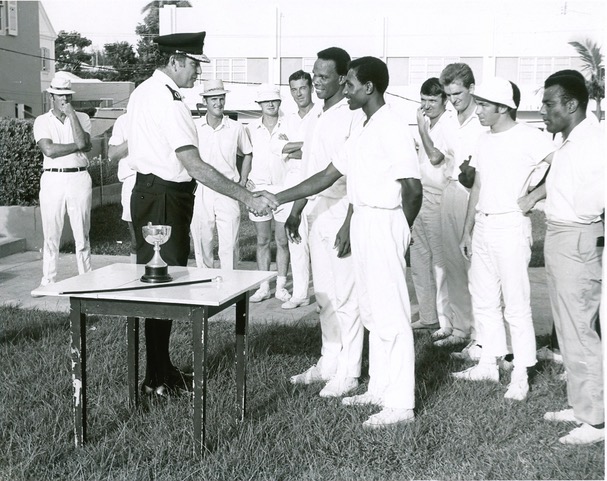 Dudley was promoted to Inspector in December 1971 and continued serving in CID, with a spell in Murder Room before being posted to Central Division in uniform.   He then had spells in Eastern Uniform and Central Uniform. Dudley attended a Riot Seminar at the University of Louisville in 1979.

During his police career Dudley received 7 Commendations from the Commissioner and one from the Chief Justice.  They were as follows:-

Dudley was awarded the Colonial Police Medal for Long Service and Good Conduct in 1969 by the Governor. H.E. Lord Martonmere. 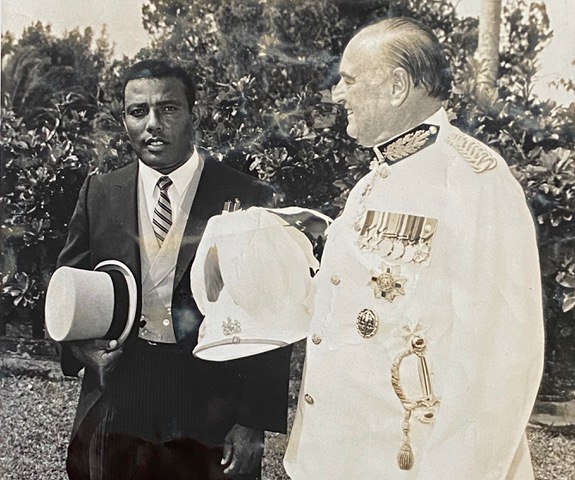 In 1976 Dudley returned to Government House to receive a Clasp for his CPM for Long Service and Good Conduct. 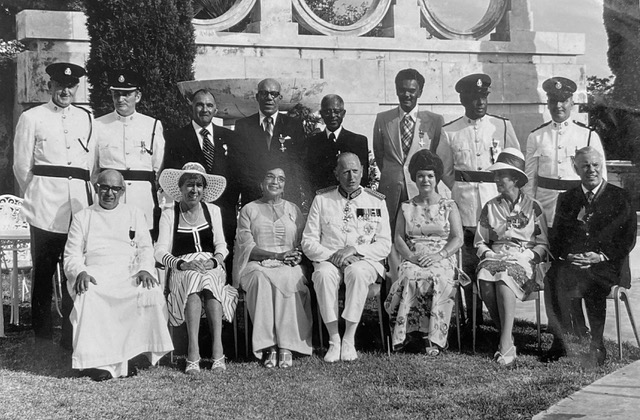 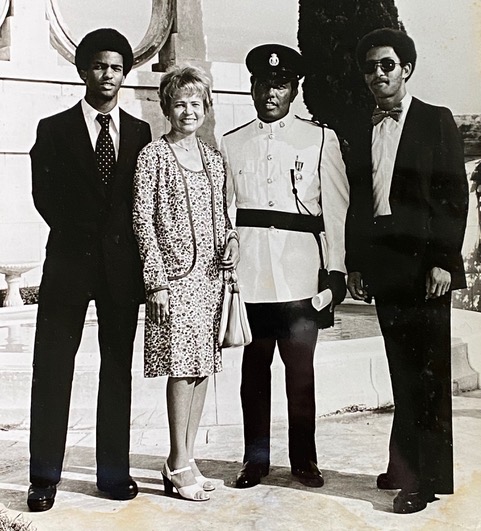 Dudley retired from the Bermuda Police Service in May 1981, after 30 years faithful service. Throughout his police career Dudley had been a very popular and much liked officer with all those he worked with.

Following his retirement from the Police Service, Dudley worked for several years as a salesman for a Wholesale company and also worked for his brother’s company, Swan Brothers Welding Company. 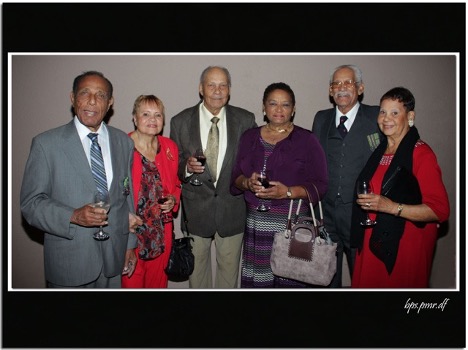 All in the Family
(l-r) Dudley and Marlene Swan, Hilton and Brenda Wingood,
and Gladwin “Doc” and Lillian Hall

Dudley and Marlene, along with “Doc” and Lillian Hall, and Hilton and Brenda Wingood, have been very supportive members of our Ex-Police officers Association, and have attended our social functions on a regular basis.  Unfortunately, the arrival of Covid seriously curtailed our ExPo activities, and more recently, our good friend Hilton has been in poor health and has not been able to get out and about very much.

Between these three retirees, all related by marriage, they have a total of some 90 years service in the Bermuda Police.  That surely has to be a record for any family in Bermuda.

At the writing of this article Dudley was our second senior retiree, having joined the Police Force in 1951, while our senior retiree is Inspector Gladwin “Doc” Hall who joined on 1stOctober 1950 – over 70 years ago. Their brother-in-law, retired Chief Inspector Hilton “Jellybean” Wingood was a relative  ‘newcomer’ to the Police Service compared with “Doc” and Dudley, having joined in March 1955. 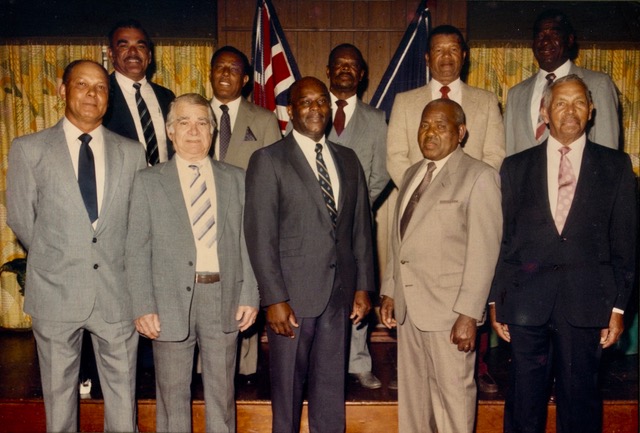 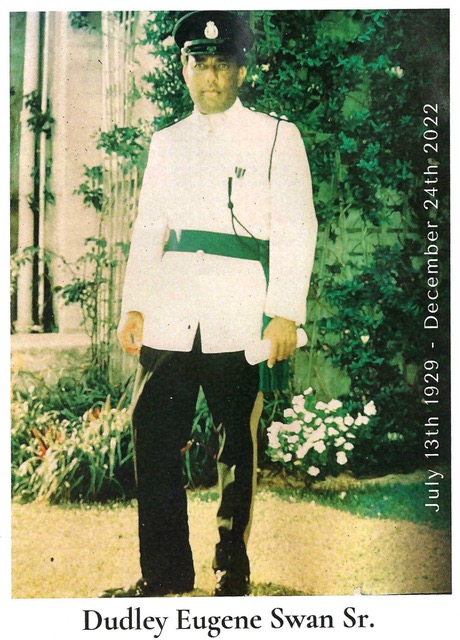 The funeral for our dear friend and colleague, Dudley Swan, was held at the 7th Day Adventist Church in St. George’s on Monday 9th January 2023, with burial following at the Richard Allen Cemetery. 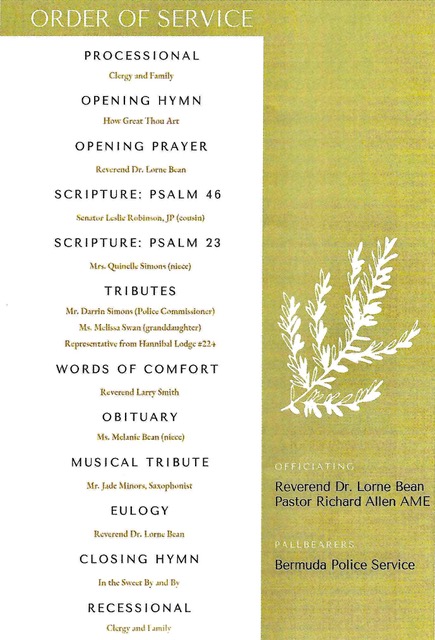 Order of Service
In attendance were Dudley’s family and friends, along with many of his former police colleagues and BPS senior officers, including Commissioner Darrin Simons, Acting Deputy Commissioner Na’imah Astwood, Assistant Commissioners Antoine Daniels and Martin Weekes, ExPo President Calvin Smith, retired DCOP Roseanda Jones, ACOP’s Carlton Adams and Wayne Perinchief, and many other serving and retired police officers.
COP Darrin Simons gave an excellent Tribute to Dudley (see below) as did Pastor Larry Smith (retired Superintendent) with his Words of Comfort. Larry spoke of the close bond he shared with Dudley who became his mentor when Larry first worked in Eastern CID at a time when Dudley was OIC of Eastern CID.
In his Obituary, read by Dudley’s niece Melanie Bean, it was clear that joining the Police Force at the age of 21 was a major source of pride and joy to Dudley, although nothing topped his love for his wife Marlene and their two sons Perry and Dudley. 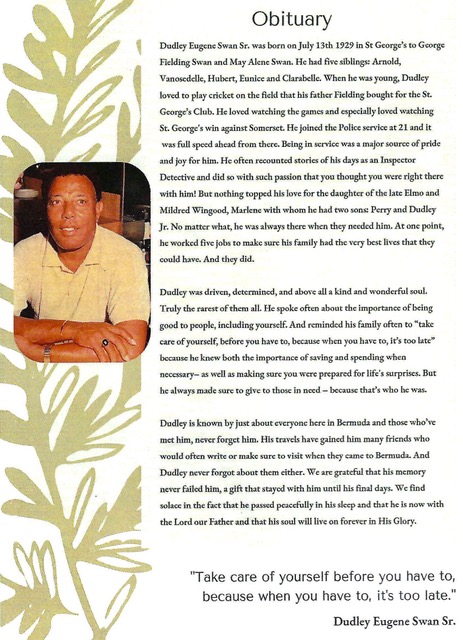 Obituary
For any ExPo members who have attended our social functions over the years, you will no doubt be aware that Dudley was one of three of our retired officers who were related to each other through marriage.  Marlene’s sister, Lillian, being married to retired Inspector Gladwin “Doc” Hall,  and the two sisters having a brother, retired Chief Inspector Hilton “Jellybean” Wingood who is married to Brenda.  Between them, Dudley, Doc, and Hilton had served in the BPS for some 90 years.
The BPS provided a Full Service Tribute to our dear friend Dudley which included draping his coffin with the BPS flag, displaying a police hat, ceremonial sword and Dudley’s medals on the coffin, providing pallbearers, and arranging for the playing of the Last Post at graveside by Lt. Sheldon Fox.
Dudley will always be fondly remembered by all his friends and colleagues who served with him in the Bermuda Police Service. 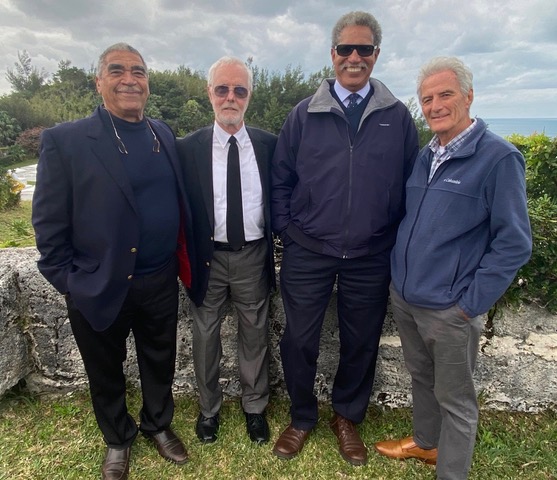 Bermuda owes a debt of gratitude to Inspector Swan for his 30 years of faithful, dedicated service to our community and Police family.

Mr. Swan joined the Bermuda Police Service on 16th July 1951.
In 1951:  The Mid Ocean Club, Tucker's Town, was established as a private members Club, instead of a luxury hotel it had been.  Ocean View golf course was established for Blacks in Bermuda.   St. George's won 50th annual Cup Match by 7 wickets.
1952 Queen Elizabeth was enthroned and Bermuda Public Services Union was formed.
1959 saw the movie theatre boycott and many other difficult events Mr Swan would have policed through. Not to mention the racial challenges he would have experienced in the police force at that time.
Bermuda was a very segregated place.
That is the era in which Mr Swan joined the Bermuda Police Force. And my reality is that I owe Mr. Swan a debt of gratitude, not only for his service to the community but also for his part in cutting a path toward the opportunities I enjoy today.

Mr. Swan’s first posting was to God’s country, the Eastern Division, which would have been familiar to him, having been born and raised in St. George’s. After a few years on the beat he became a parish constable and was then transferred to Eastern Criminal Investigation Department where he served for many years.

Mr. Swan was promoted to Sergeant on 1st May 1967 becoming the Officer-in-Charge of St. George’s CID and was again promoted, to Inspector, in December. He also worked in the Murder Room before a posting to Central Uniform Division.

During his police career Dudley received 7 Commendations from the Commissioner and one from the Chief Justice. Three noteworthy ones are:
May 1960  -  Commended for zeal and initiative in investigating two cases of breaking and entering. Also awarded £5
October 1962  -  Commended by Chief Justice for courage and restraint when dealing with a disturbance.
February 1967 - Commended for obtaining information, and for detective ability as a result of which 28 cases of breaking and entering and robbery were cleared.

In 1969 Mr. Swan was awarded the Colonial Police Medal for Meritorious Service and retired from the Bermuda Police Force in May 1981, after 30 years of service.

I have fond memories of Mr. Swan from some of the Ex-Police Officer functions as being a very friendly, and engaging person. He always had an infectious smile, a kind word and a good story. May he rest in peace.

In closing, on behalf of the women and men of the BPS we extend condolences to his loving wife, Marlene, his sons Perry and Dudley Jr., and the rest of his family, and friends, and former colleagues. My prayer is that you will find a measure of comfort in the fond memories you have of Dudley as you partake in the fellowship, amongst family and friends that these difficult times often bring.  May God Bless you all."