The Commissioner of Police is pleased to announce the promotion of Sergeants Dennis Astwood, Karema Flood, Darren Glasford, Shakisha Minors, Ronald Taylor and Kenten Trott to the post of Inspector. 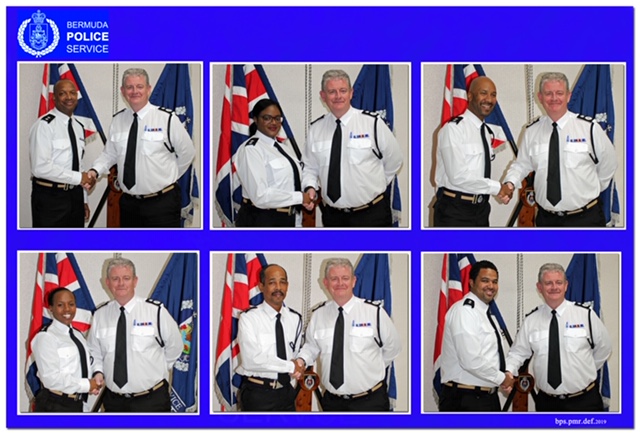 All six were promoted by Commissioner Stephen Corbishley in front of family, friends and colleagues at a ceremony held in the Police Recreation Club hall, Prospect Devonshire 5:30pm today (January 11th).

Inspector Astwood has a very extensive and broad policing experience, spanning both the uniform and investigative theatres. Of note:

•​Senior Investigating Officer in the Narcotics Division and later the Organized and Economic Crime Division
•​The Lead Officer (Acting Inspector) of the inaugural Community Action Team (CAT)
•​Part of the inaugural Service Delivery Improvement Team
•​With regards to a very serious investigation, the Commissioner of Police assigned Inspector Astwood as the police representative joining a team of Government officials and their lawyers attending court hearings at the Privy Council
•​Senior Investigating Officer in the Serious Crime Unit
•​The inaugural post of the Staff Officer to the Officer in Charge of the Community Policing Division
•​Acting Inspector – 2 I/C Community Policing Division
•​Bronze Commander (Logistics) – America’s Cup (AC-35) Command Team
•​Current posting (since September 2017): Acting Inspector and Tasking Manager of Operations targeting those who pose a significant threat to the community

Inspector Astwood, has been a part of numerous serious international investigations, working alongside overseas law enforcement agencies, including in the U.S. (FBI, DEA, U.S. Customs and Homeland Security), in Canada (Royal Canadian Mounted Police), in the Caribbean (Jamaica Constabulary), to name a few.

Inspector Astwood has received extensive local and overseas training in the United Kingdom, USA, Canada, and the Caribbean; including:

Inspector Astwood, for his meritorious service, has been awarded:

Inspector Astwood has also been the recipient of:

Inspector Karema Flood commenced her policing career with the Bermuda Reserve Police in 2000 where she served for a year. She became a full time police officer in 2001 and has had the privilege of being posted within the following departments:

She was promoted to the rank of Sergeant in September 2013 and was posted to Hamilton Police Station as B Watch Station Sergeant for a short period. She was then posted to the Central Investigation Unit as a Detective Sergeant for a period of two years before being posted to the Vulnerable Persons Unit where she remains asInspector.

Inspector Flood holds a Bachelor’s degree in Global Business Management in addition to certificates in Leadership and Management. She is the recipient of numerous Merit Awards and Letters of Good Work. Throughout her career she has had opportunities to attend and successfully complete several training courses locally and overseas.

Inspector Flood currently holds a Senior Investigation Officer (SIO) designate and has assisted and led numerous high profile investigations. She is passionate about investigative work and throughout her career she has investigated a wide range of offences to include:

The majority of these investigations resulted in successful convictions.

She works alongside external agencies in the community to highlight awareness and preventative measures to both children and adult audiences to minimize their risk of becoming victims of sexual abuse.

Her main objective for her and her team is to deliver to child victims and victims of sexual assault and elder abuse, a level of service that encompasses respect, attention, confidentiality and quality focused investigations.

She enjoys travelling, debates, reading and having a good laugh.

Inspector Darren Glasford commonly known as ‘Shakee’ has 32 years of policing experience. He joined the Bermuda Police Service in 1987 as a Police Cadet and became a Police Constable in 1989. He is an avid cyclist and has represented Bermuda on a number of occasions at the elite level. He has worked in the following areas:

He was the officer in charge of a team of officers that were sent to the British Virgin Islands as part of a hurricane relief effort.

Inspector Glasford has received Letters of Good Work, Merit Awards, as well as Commissioner's Commendations. He has completed several overseas training courses in the U.K., United States and the Caribbean. He has been trained as a PSU Commander, Firearms Instructor, Tactical Advisor, Tactical Firearms Commander and Post Incident Manager.

In 2013 she was promoted to the rank of Sergeant. Over the years she has been the recipient of Letters of Good Work, Merit Awards, Commissioner’s Commendations and the 2018 ASSL/ACCP Regional Recognition AwardProgramme’s Top Caribbean Officer second runner up award.

In recent years, she has worked with community partners and stakeholders to deliver a community focused service, driving specific initiatives to help resolve community issues.

Additionally, she developed the ‘Be a Part of a Miracle Hamper’ Initiative which has donated over $18,000 worth of goods to copious Bermuda charities since its conception in 2014.

She has a 7 year old son that she owes her drive to progress her policing career to.

Inspector Ronald Taylor joined the Bermuda Police Service (BPS) in 2000, having previously served in the Trinidad and Tobago Police Service for eleven years. He is married to a Bermudian and has three children. He has thirty years of policing experience. Since joining the BPS he has worked in the:

Inspector Taylor has received several Letters of Good Work; Merit Awards and Commendations. He has completed overseas training courses in the United Kingdom; United States and the Caribbean. He has also attended several personal and continuous development courses in management.

Inspector Taylor’s new posting is as an Incident Commander in the Community Policing Division.

Inspector Kenten Trott has been a police officer for 11 years, joining in April of 2007. He was on Recruit Foundation Course 69 and graduated receiving the Baton of Honour and Academic Award.

Inspector Trott spent three years as a Police Constable and during that time worked in the following areas:

In January 2011, at 26 years of age, he was promoted to the rank of Sergeant. During his time as a Sergeant he wasposted in the following areas:

During his career, he has received Commissioner’s Commendations, Merit Awards and Letters of Good Work.

Inspector Trott’s new posting is in the Serious Crime Unit. 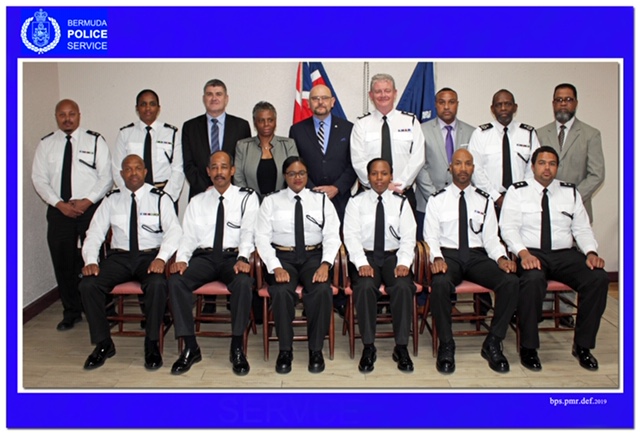