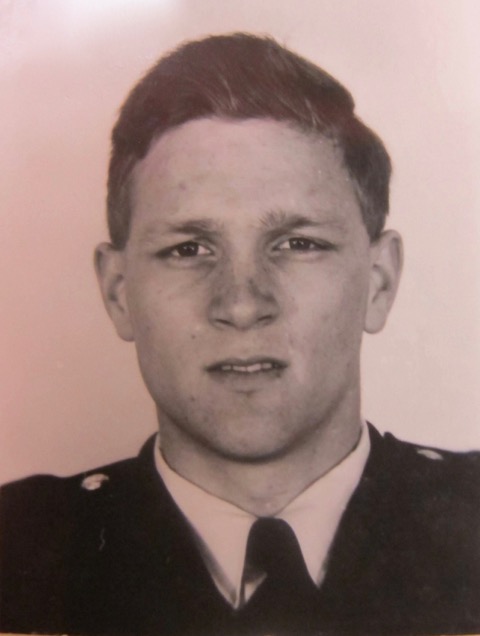 I was born in Dover, Kent on 29th April 1940, obviously the war was on and my father was in the army and Dover was not a good place to be. He was a Radar Gunnery Instructor in the REME and was moved around several times so my mother and I followed him.

We first went to Tenby in South Wales where my sister was born. From then on there were a number of moves and it became impractical to keep on moving so my mother, my sister and I spent the rest of the war living with my father’s parents in Portsmouth, Hampshire.

When I was 15 we all moved to Sanderstead in Surrey and I attended Purley County Grammar School for Boys and I remained there until I had taken my A Levels and then left.

I had no ambition to go to university and really wanted to be a Police Officer. I applied to several forces in England, but in those days they only recruited people with a height of 5’10” and being only 5’8” they would not even consider me. I therefore went to work in a path lab attached to Westminster Hospital where I earned the princely sum of £5 per week. After just over a year there I changed jobs and went to work for the Welcome Foundation analysing drugs and vaccines.

It was my habit to daily complete the Telegraph crossword which I would do during my break at the labs, and just above the crossword there used to be a column called ‘Official Appointments', and one day reading these I saw adverts for recruits to the Colonial Police Service, so I wrote off to them. They in  turn sent me applications for forces in Nyasaland, Bechuanaland & Bermuda.

I chose Bermuda and without telling my parents, with whom I was still living at the time, sent of the application form. I was later interviewed by the Governor Sir Julian Gascoigne at some venue in London, still without telling my parents.  (Editors note - We had never heard of the Governor interviewing potential recruits to the Bermuda Police but ironically we have a photo below of Terry giving a salute to H.E. Sir Julian Gascoigne and His Imperial Majesty Haille Selassie during the latter's brief visit to Bermuda in 1963). This photo was recently featured in our "Who, Where and When" column at http://expobermuda.com/index.php/who-when-where/507-a-rare-visiior 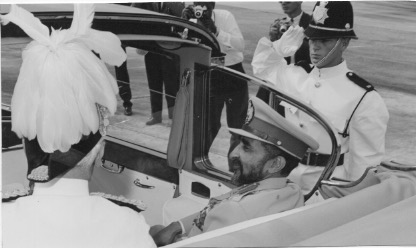 Young P.C. Terry Bawden salutes  H.E. the Governor Sir Julian Gascoigne and
His Imperial Majesty Haille Selassie who had stopped off briefly in Bermuda
on his way to a State Visit to the U.S.

It wasn’t until I received notification in the post  that I had been accepted, subject to completing the training period at Hendon, that my parents had any knowledge of the proceedings. In fact I was in my bedroom  one morning when my father came in and said “Why are you getting a letter from the Crown Agents” so I then informed them all.

After the training was completed at Hendon, I had two weeks free before flying out to Bermuda, which I had no knowledge of, apart from seeing the full stop on the end of the word Bermuda in an old atlas I had.

I arrived at night with one other recruit  whom I cannot remember apart from the fact that he was Welsh and we were met by a Sergeant and taken to billets in Admiralty House (the recruit in question was John Millington who served for 3 years). When I awoke the next morning, I was stunned by the beauty of the place, which at that time seemed totally unreal to me.

I was very homesick at the time not having ever  left the shores of England before and I was taken under the wing of Bill Black who was very kind to me. 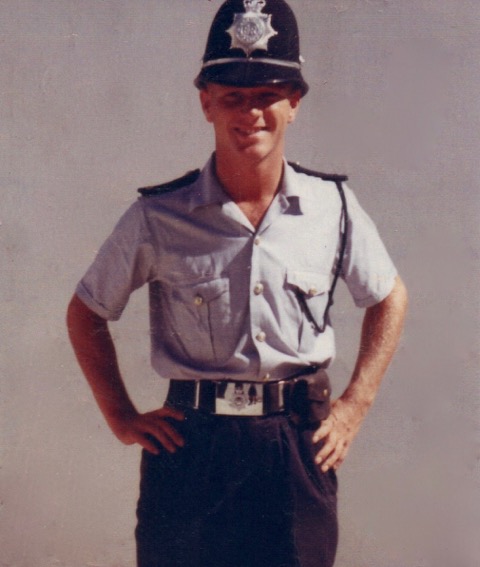 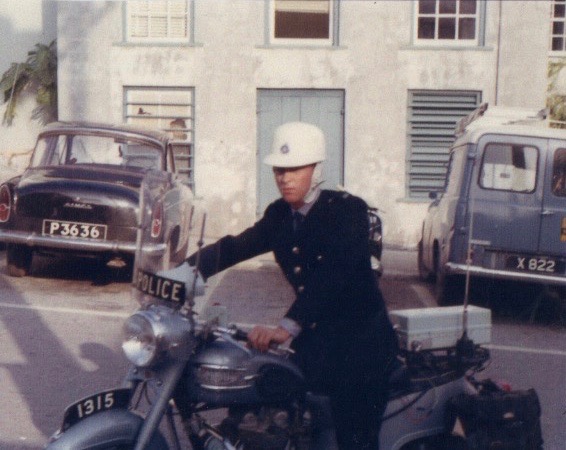 Terry quickly adapts to riding a motor cycle
A short while later I was posted to St Georges where I soon conquered my homesickness and settled down and enjoyed life.
Editors note -  Terry has kindly provided us with these photos all of which were taken while he was working in St. George's 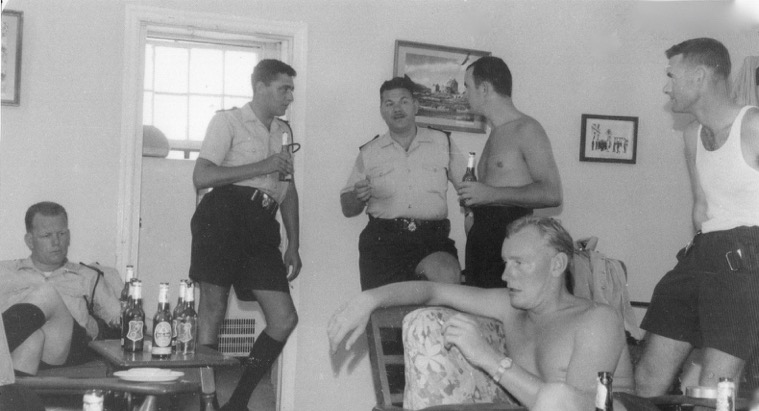 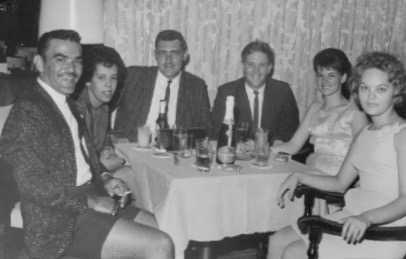 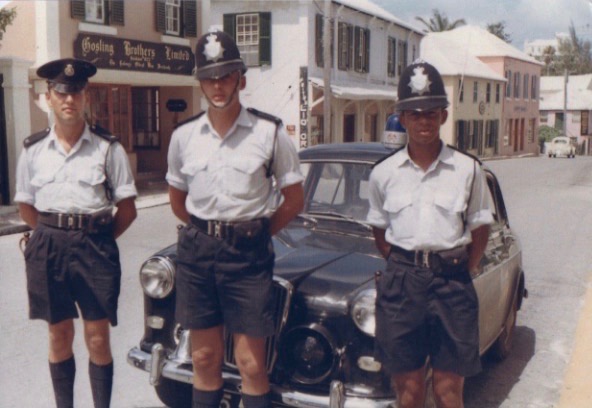 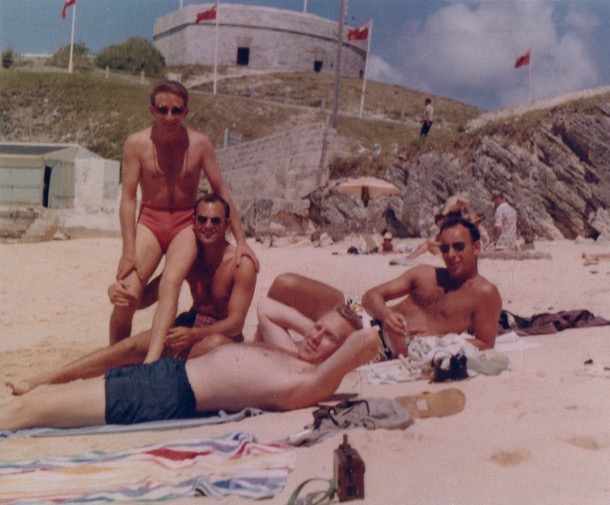 I met Joanne Osmond when she was 17 years old and married her the following year, 1965,  when she was 18, and we have been together ever since. 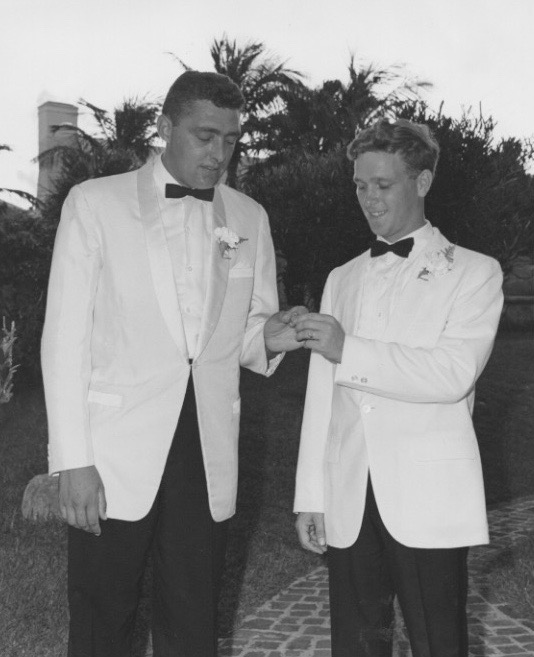 Best man Laurie Jackson assures groom, Terry, that he has the ring! 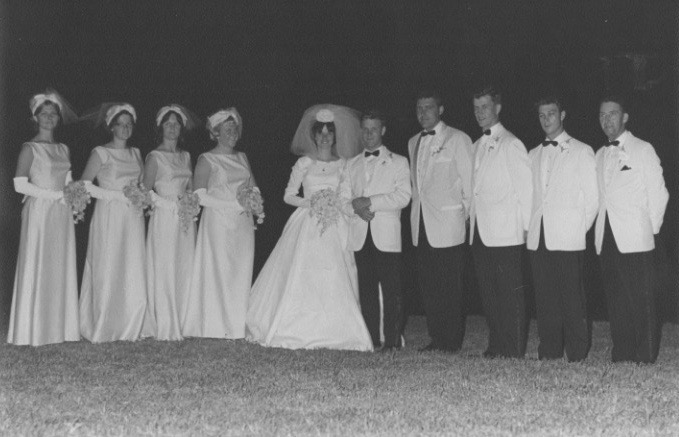 Wedding Day for Terry and Joanne
(l-r)  Pamela Hayward, Janice Osmond, Barbara Holmes, Cathy Mann, Joanne and Terry,
Laurie Jackson, John Swift, Bill Pratt, and Syd Bamber (Prison Officer)
I had  obviously been involved in the aftermath of the Belco riot, and the fiasco that was the following court proceedings.  I lost interest in being in the Police there, so returned home to the UK.

One could say, looking back and knowing what I know now, that I might have done things differently, but we can’t dwell on the past and I am now very happy with my life and that of my children and grandchildren. As a  matter of interest, the sister I mentioned who was born a year after me now lives in South Carolina.

Joanne and I left the Island in 1966 arriving back in England aboard the New Zealand Shipping Company vessel the “Rangitani”.

Two weeks later I was interviewed by The Surrey Constabulary and accepted by them, but had to do the initial training course at Sandgate again.  Because of my previous police experience I was made class Drill Leader. 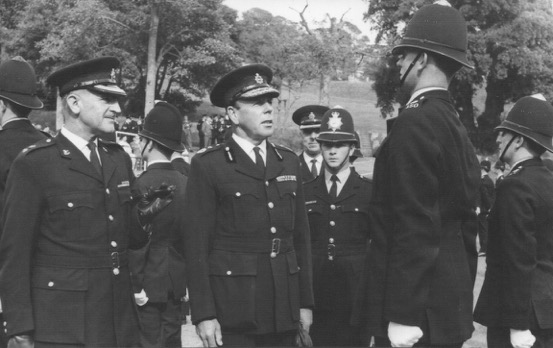 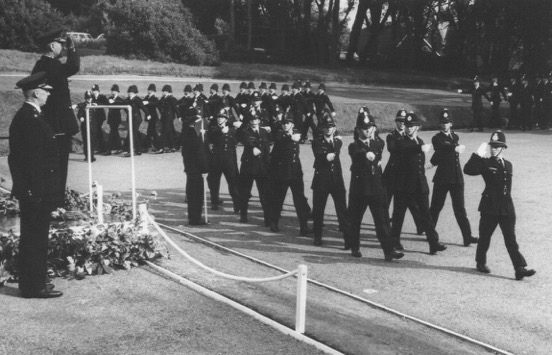 P.C. Terry Bawden leads his class and gives the salute on his Passing Out Parade

I was shortly after that posted to Ripley in Surrey which was a rural section consisting of a Sergeant and 6 PCs where I was a divisional  Motorcyclist.

In 1967 our first child was born, a daughter Teresa. During my posting there I took and passed the promotion exam for Sergeant and Inspector. After three years service there I was promoted to Sergeant and posted to the force  operations room which dealt with the receiving of all emergency calls for surrey and the dispatching of personnel to deal with them and liaising with the other emergency service.

In 1971 whilst stationed there our second child, a son Timothy was born and I was then posted to Woking Division as Sergeant. Most of my time there was taken up with patrol/Station Sergeants duties, although I did spend a period prosecuting in Magistrates Court.

Whilst at  Woking, I had to deal with a light aircraft crash which had come down in land adjacent to which was the residence of the then exiled King Constantine of Greece, which was quite interesting and involved, particularly with the air crash investigation branch and the security problems.

After 7 years as Sergeant, I was promoted to Inspector and posted again to the Force Operations room and within the first week of the posting I was in charge of the room when the IRA bombed two of the major public houses in Guildford killing some and wounding others and completely demolishing the front of one of the pubs “The Horse and Groom”. Now that was a real eye opener for a recently promoted Inspector. 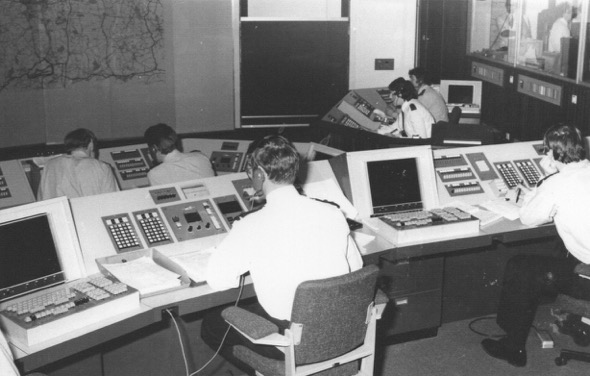 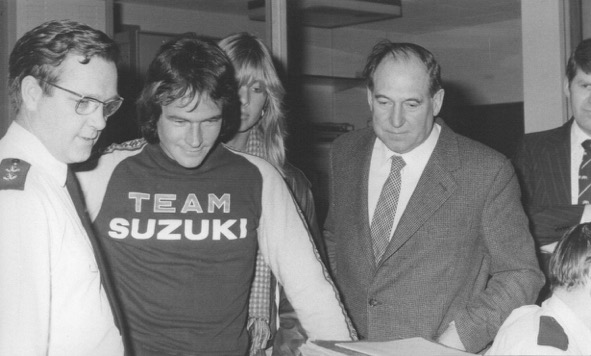 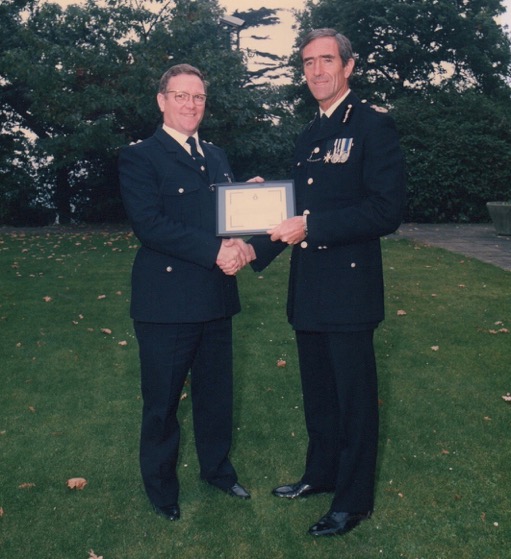 After that I continued to work for the service as a civilian, in the role of officer in charge of the prosecutions department which dealt with the case files for all prosecutions in Magistrates and Crown Courts, for a two year contract.

Following that I obtained employment in a totally different field and worked At Guildford Technical College as their Data Manager working on computer systems that dealt with the students enrolment and the obtaining of available Government funding for them.

I finally completely retired at the age of 68 years in 2008 and have been so retired since then. In the meantime our daughter had presented us with a Grand daughter Millie who is now nearly 19 years old and at University and our son gave us two grandsons Lewis and Danny aged now 16 and 12 respectively. 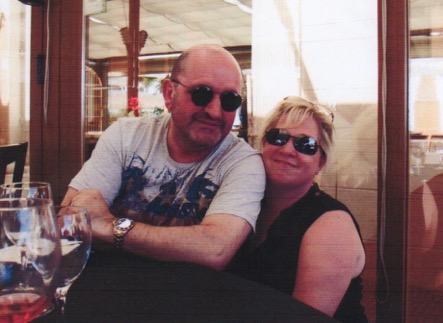 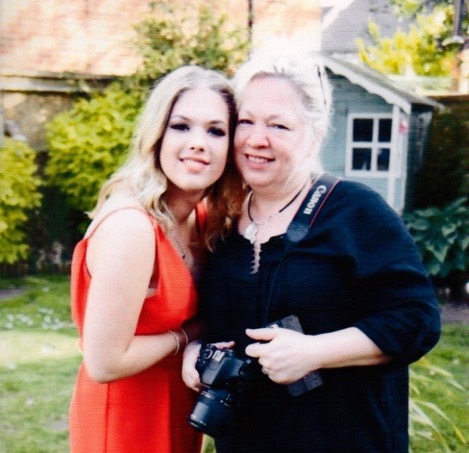 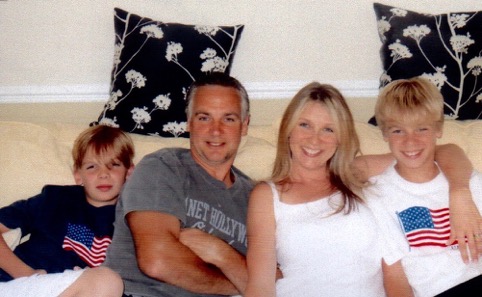 Terry's son Timothy with his wife, Lou, and their two sons, Danny (left) and Lewis (right)

About two years ago we moved away from our large house in Effingham, Surrey into a smaller cottage at Wrecclesham which is a village on the outskirts of Farnham in Surrey where we have been very happy. 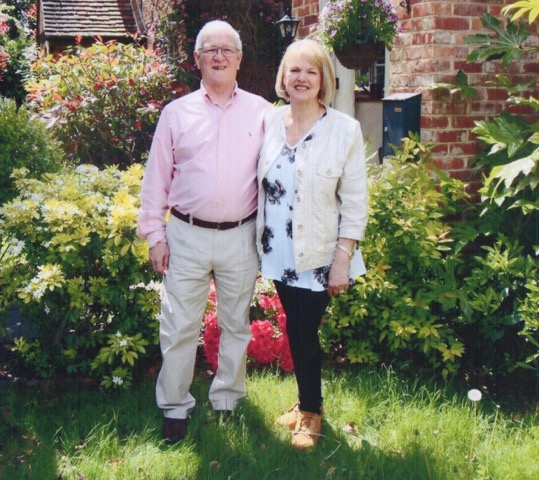 Terry and Joanne relax in their garden at Wrecclesham

All the best, Terry Bawden

Steve Smedley 1 year 11 months
Hi Terry. I served in Surrey 1970-1975 when I left for Bermuda. I do not recall that we ever met but I too was on duty in Guildford on the night of the bombings. Maybe you heard me on the radio!

Editors note - He Steve. Good to hear from you. Hope all is well with you and your family. Will try to pass your message onto Terry via email.

Terry Bawden 5 years
Alfie, thanks for the comment, I agree, we had some good times there and what's life without a good dose of iniquity. I wouldn't have missed my time there for anything. All the best, Terry

Terry Bawden 6 years
Thanks for the contact John, good to hear from you after all this time. I'm still keeping fit even though nearly 77 ,and I hope the same applies to you and yours. Terry

John McQuaid 6 years
Terry, only came across this bio. whilst browsing. Nice to hear how life has gone for you and of course, I do remember you well from that den of iniquity which we knew as St Georges Police Mess, especially when Commander Fox was in charge. You were not there long and I had moved off to the far West by the time you went home anyway. All is well with me and mine as I creep into the second half of my seventies.Best regards to you and here's to a long life Terry.John

Terry Bawden 6 years 2 months
Nice to hear from you, David. Yes we left Bermuda in about June 1966, so we would not have met. All the best. Terry

Davie Kerr 6 years 3 months
Terry, you must have left just before I arrived (14 Nov 66). I survived more or less intact until retiral in Sep 2000, and know the vast majority of the people you mention. Bill Black, Lawrie Jackson, Bill Pratt and Eddie Foggo are unfortunately no longer with us.

Terry 6 years 5 months
Funny how you happen upon these posts without really looking.A click here and there in this age when no one really wants to talk.I remember all the players here to an extent.Shalom.