We recently came into possession of these two photos of a Police Course believed to have been held at Prospect.  We also believe that one of them was published in an issue of the Bermuda Police Magazine but have not had an opportunity to go through old copies to see what details were published such as the names of the participants.  We wanted to know exactly where and when the photos were taken,  who are the students and instructors, and what was the course?

This has proved to be quite a difficult task identifying everyone and at the point we have been able to 8 or the 14 people in the photo.  We do believe that a copy of the first photo was initially published in a copy of the Police Magazine but as of this date (14th November 2017) we have not been able to track it down to see if everyone is named.  Listed below the first photo are the names we have confirmed so far, mainly thanks to the assistance of former DCOP Ian Morrison who was shown the photos by George Rose.  If you can assist with any other the other 6 names please let us know.  In addition to those named below we note that also arriving during the first few months of 1952 were Leslie Waddell and James "Jim" McMaster, both of whom were definitely from Ireland,  Frank Farmer from the UK, and Edward Bailey.

George Rose has checked the passenger list for the SS Reina Del Pacifico which departed Liverpool on 10th July 1952 with three persons on board destined for Bermuda.  They were Francis "Frank" Farmer from Surrey, England,   Raymond Barnewall from Country Cork, Ireland, and E.J. Bailie (probably the Edward Bailey in our records). It is quite possible that all three of these men appear in these photos.

After looking through past copies of the Police Magazine we discovered this same photo, with Superintendent Percy Miller standing and Thomas D. Doyle standing, and a complete caption as now  appears below the first photo.  Although we now know all of the surnames, there are a few where the magazine caption only provides first-name initials so we have added christian names where they are known.  It was noted in the magazine article that when the photo was published John Joe Sheehy, Tommy Doyle, and Jim Hanlon were the only members who were still serving in the Bermuda Police.  J.F. "Jim" Walsh was the local manager of the Sun Life of Canada Assurance Company, Mike Boylan when last heard of was believed to be an officer in the U.S. Airborne Division, C.N. Murphy was a serving member of the Ottawa City Police, and G. Wright had a "civilian position" in Ottawa. 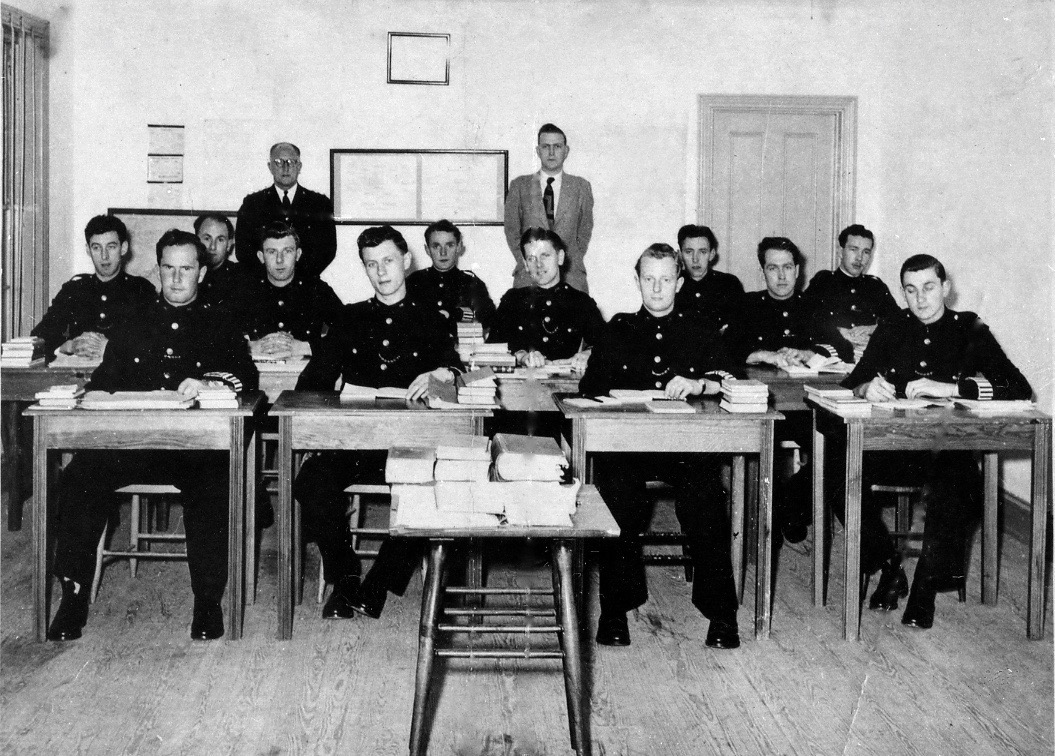 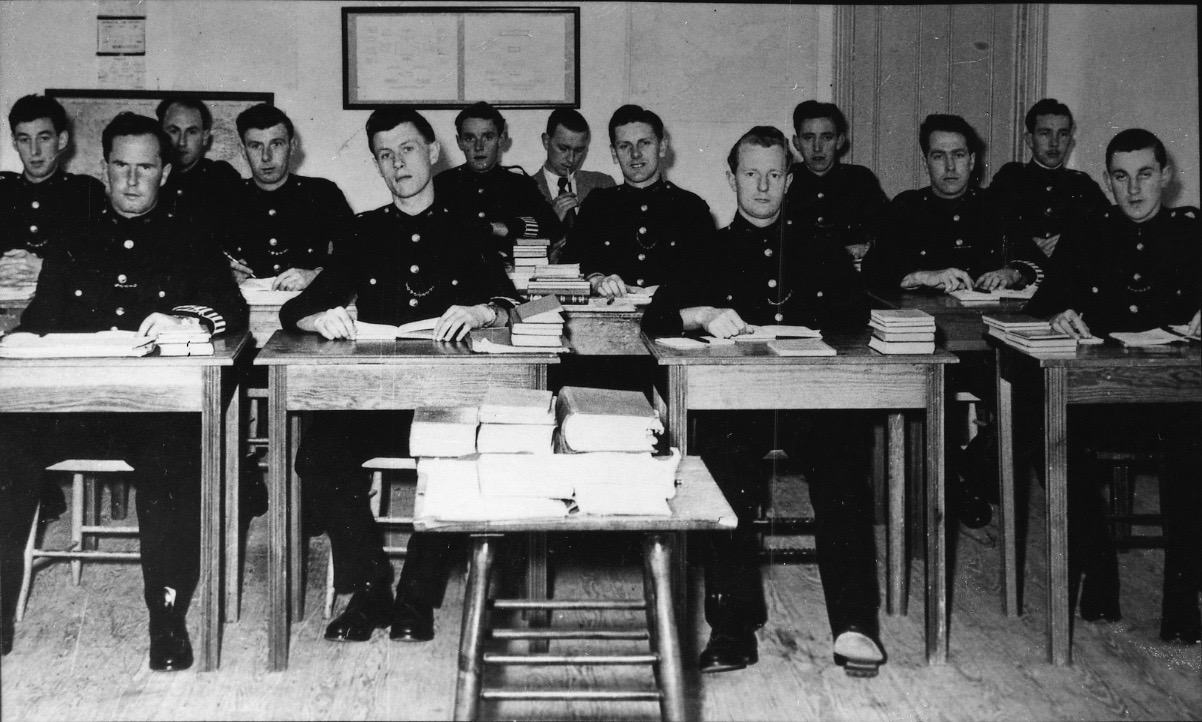 Terry 4 years 7 months
Thanks for your research George.I did same but online and not on Bermuda soil.Records are everywhere.Many missing but with help can support facts or presumed.Nice bunch of guys; some of whom led the Police Service for many years.Time for a rum.

George F. Rose 4 years 7 months
I showed Ian Morrison this group photo. He confirmed J.C.P. Hanlon, John Joe Sheehy, Supt. Percy Miller and Thomas Doyle "who was probably waiting for his uniform". Ian named an additional three as:Front row of four at extreme right is Mike BOYLAN.Front row third from left is Terry MOODY who worked as a traffic officer.Middle row first on the left is Clement 'Clem' O'BRIEN who married an American girl and moved to Boston.(See Arthur Rose's article for picture of O'BRIEN)According to Ian, who came to Bermuda in 1953, these officers in the photo were the first batch of all Irish recruits. This now makes 7 out of the 14 in the top photo to be identified.Editors note - Many thanks George and to Ian. This is very useful information. It would be great to be able to name the rest of the guys on this course.

George F Rose 4 years 7 months
Enquiries reveal that the Mid-Ocean News was a sister newspaper to the Royal Gazette and was first published in 1911. Microfilm records for the MON at the Bda Library only commence in 1961 however, and run until the MON closed down some years ago. Microfilm records for the 50 years period between 1911 to 1961 are missing. Clearly, this period includes 1952 - the year of our interest. The answer is that the news articles for that 50 year period were being archived/stored within the Hamilton Hotel. On the 22nd December, 1955 the hotel was destroyed by fire and all news records for that period including the possibility of this photo and accompanying article were lost forever.Editors note - Many thanks George. This shows the vital importance of storing records safely. Sadly, we lost a huge amount of our photographic history when SOCO transferred to Southside, the photos were not stored in dry conditions, and were disposed of when it was discovered there was a mould problem. Hopefully, we learn from our oast mistakes.

George F Rose 4 years 7 months
For The RecordThe S.S. Reina Del Pacifico departed Liverpool on 10 July 1952 bound for the West Coast of South America. On board were the following 3 police officers all travelling 3rd Class. Intended destination is shown as Bermuda.1. FARMER, Francis J. (26) of 10, Stroudes Close, Worcester Park, Surrey.2. BARNEWALL, Raymond C. (21) of Kings Terrace, Cobh, Co. Cork, Eire3. BAILIE, E.J. L. (23) of 28 Woodstock Place, Belfast, N. IrelandI can find no data base reference to James C. P. Hanlon or to James McMaster travelling at any time or on any ship – but that doesn’t necessarily mean they didn’t. Passenger Manifests for their travels may not have survived.

Terry 4 years 7 months
Getting back to the original question about "What kind of Course" ; no one has mentioned anything reagarding it.So whats the answer.Editors note - It's a good question Terry, and I asked it because I don't know the answer. It could have been a basic training course of some kind, perhaps with Percy Miller as the instructor. I note that a group of at least 5 Irish men were requited in 1952, several of whom are in this photo (John Joe Sheehy, Tommy Doyle, and Jim Hanlon) and possibly more. Also recruited in 1952 were Edward Bailey, Frank Farmer and Cannoth Roberts but not sure if any of them are in the photo. Could it have been some kind of refresher course.?Have checked the Police Register entries for John Joe, Jim Hanlon and Jim McMaster and see that Jim McMaster served in the Royal Ulster Police for 2 years before comning out to Bermuda so it would be unusual for an experienced policeman to be required to attend a basic training course. There is no mention of the other two being police officers prior to coming to Bermuda.

Terry 4 years 7 months
[quote name="Terry"]Why does Admin keep editing my comments.I said a few times in posts that John Marshall was my cousin.That's a fact.Editors note - Please explain what you are referring to Terry. No-one doubts that John Marshall was your cousin. You wrote to say that the man standing at the back of the class in uniform this photo is John Marshall. I believe that information to be incorrect and My comment/s prior must have been lost in cyber world.No worries. Can't teach an old dog new tricks.Shalom.

George Rose 4 years 7 months
Stamped at the center on the rear of the top photo are the words:R. GORDON ROBINSONMID-OCEAN NEWSBERMUDATher e is no date marked. It is likely that there was an accompanying newspaper article in the MON naming the officers shown. John Joe Sheehy joined the Bermuda Police on 15.02.1952 so I will search MON microfilm at the Bda Library for the weeks following 15.02.1952.Editors note - Great idea George. Look forward to hearing what you find. In the meantime, I'll send the photos to a few of the older former colleagues who may not see our website on a regular basis.

Terry 4 years 7 months
John Marshall standing left.Editors note - Also definitely not John Marshall. He is a Superintendent who was then responsible for training.I've received the following information in a separate email from Mike Cherry and I believe he is correct onn both counts:-"This was before my time, but I would agree with you re JCP (Hanlon) and Tommy (Doyle). Superintendent Percy Miller is standing at the back and the guy on the right of the photo in second row is Jimmy Walsh.I would have to look at the Magazine to be any more help."