At first glance this appears to be a photograph of 11 soldiers, but if that was the case it would not be displayed on our ExPo website.  So, we asked  who are these 11 men, where and when was the photograph taken, and what were they doing?  To assist you we produced two blow-ups of the photo.

As of 11th September 2017 we had readers correctly identify 10 of the 11 actors, all serving police officers, who performed the play, Journey's End, at City Hall Theatre, in 1966, with sincere thanks to our good friend Nick Hall for organizing the wearing of superb First World War uniforms and equipment. This production was produced and directed by "Tony" Block, with Anna Mulholland as Assistant Producer.

We had just one actor still to be identified and in order to assist you we  published individual photos of the cast, taken from the programme, so all you hadto do is find the llth man and figure out where he is on the photo.

We received the final ID of Fred Church from George Rose and Mike and Cam Burke, and also had assistance in identifying cast members from Mike Cherry, Dave O'Meara, Terry Bawden and Terry Cabral, and also George Rose who was a member of the cast. 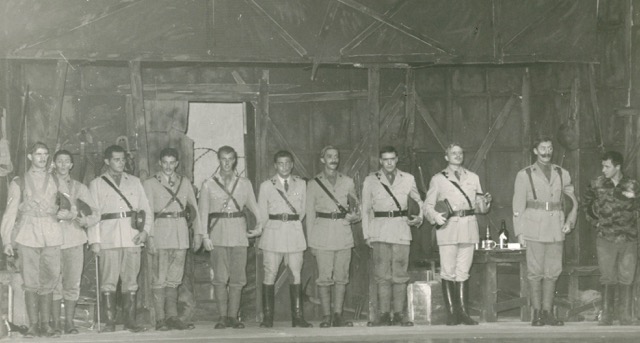 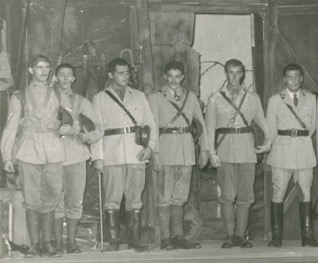 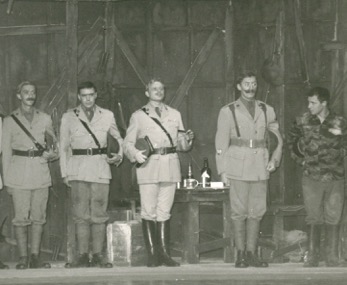 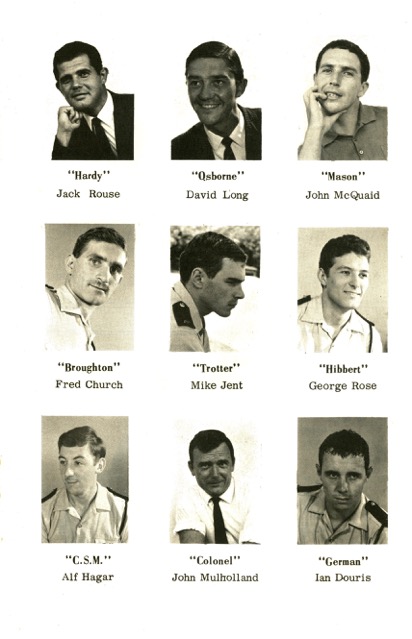 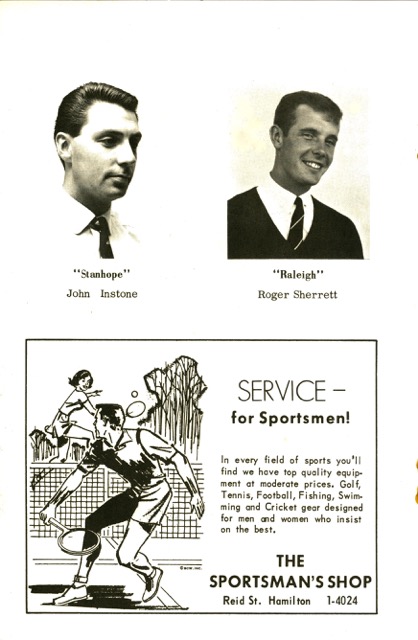 Terry 4 years 8 months
When Fred left Bermuda he went to Iceland and started his own Church.The Church of The Latter Evening Darkness.

Mike & Cam Burke 4 years 8 months
Looking at the individual photos, it must be Frank Church, 1st left in main photo and blow-up #1, who is the 11th character. Well, my summary was 'sort of' near to the storyline & I wasn't sure if it was WW1 or WW2.....50 years can do a lot towards erasing memories!! Was it 1966 when you performed the play? I think 'Arsenic and Old Lace' had been performed 1965 (?) which makes me think 1966 for 'Journey's End'.... CamCofrrect Cam. The missing man is Fred Church. Your summary of the "plot" was close enough after 50 years! I know the Drama Group put on at least 5 plays during its existence, thanks to some very talented police officers, their wives and girlfriends, and some terrific "civvies" who also put a lot of time and effort into our productions. Hope to publish a "History of the Police Drama Group" quite soon.

George Rose 4 years 8 months
So that leaves the 11th soldier to be the 1st on the left.It has to be Fred Church I think?Editors note - Yes, George. It is Fred Church. Does anyone know whatever happened to Fred. Where did he settle after leaving Bermuda?

Mike & Cam Burke 4 years 8 months
Mike says it was a 'one-punch boxing match' when John Mulholland eagerly rushed toward Jack Rouse when the bell rang, only to be floored by one punch from Jack! So it must be John Mulholland 3rd from right. I seem to recall that the soldiers (terrifically acted, as usual) were in a hut surrounded by the enemy, perhaps in the jungle(?), and they died one by one in trying to escape or go for help until only two were left who also died at the end of the play. It was about 1966 when performed and the title was something like 'The Last Farewell'...can't remember for sure. Mike & CamEditors note - Many thanks to both of you for your comprehensive answers. It was indeed John Mulholland 3rd from right, who certainly took a huge "right-hander" from Jack Rouse during that historic first evening of Boxing at the Police Recreation Club despite the fact that John had some boxing experience and was expected to win handily!The play itself was called "Journey's End" and was set in a dug-out in the British trenches before St. Quentin in March 1918 during the First World War. You can read a summary of the play on Wikipedia at https://en.wikipedia.org/wiki/Journey%27s_EndBy my count we have now had positive ID's on 10 of the ll characters in the play. I will publish individual photos taken from the programme and let's see who can pick out the 11th person on stage.

George Rose 4 years 8 months
Don't think so Dave. In the 1st photo I'm 4th from the left between Jack Rouse and Roger.The 2nd from left is John McQuaid - as has been noted earlier.Editors note - Thanks for the correction George.

Terry 4 years 8 months
Next to Ian Douris it appears to be Alf Hagar; he has those Hagar eyes.........Editors note - Right on Terry. No mistaking Alf if you knew him.

Terry Bawden 4 years 8 months
Second blow up, is the 1st on the left David Long?Editors note - Another one well spotted. Well done Terry.

Terry 4 years 8 months
Ian Douris on the end at right and "Flintstone " (John Instone) next to Roger.The others will come to mind but later.Editors note - Well spotted Terry and correct on both counts.

mike cherry 4 years 8 months
John McQuaid second from left.Know nothing about boxing.mike cherryEditors note - Correct re John McQuaid. I'm sure there is someone out there who remembers the heavyweight bout between Jack Rouse and his opponent on the first evening of boxing at the Police Recreation Club.