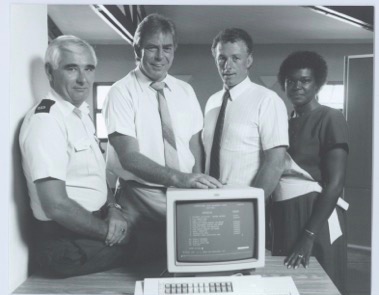 Davie Kerr 6 years 4 months
John Henry has mentioned an extract from old General Orders. Is there a file of old GO's? If so, how far back does it go? And how does one access it? Any such file would make absolutely fascinating reading....Editors note - I believe that John had saved a copy of the GO he refers to, but I will check to see if it's possible to access archival copies of GO's - or if they still exist..

Davie Kerr 6 years 4 months
I remember being seconded onto that unit, but primarily as "physical checker": if there was any doubt as to whether any particular road did or did not join any other road, I was sent to find out if it actually did or didn't. I plead "Not Guilty" to any actual input errors!Editors note - Just for the record, when George Rushe and I published the Bermuda Island Guide - the first comprehensive map of Bermuda with all of the roads named - George insisted on making two slightly deliberate mistakes indicating that a couple of small roads either met or did not meet. This was done to protect copyright, and sure enough the next handy map of the Island showed those mistakes but we did not take any action! Sounds like these 'mistakes' might have caused a little problem to Davie and the group!

Davie Kerr 6 years 4 months
I chose 1987 because that was the year we stopped re-issuing shoulder numbers: I think the first person to be issued with a "non-recyclable" number was Paula Burchall, who got 501.Incidentally, Coop's Big List of Police personnel: any chance of an updated version being issued? The original only goes up to 2003.And, while on that subject, I've noticed a couple of blokes (2096 Grant and 2172 March) who apparently joined and left on the same dates! Any idea how THAT happened?Editors note - Great idea about an updated list Davie but will not hold my breath for it! However will make the suggestion. I am aware that there are quite a few omissions and mistakes. No idea why Grant and March would be listed as joining and leaving on the same date - just an error no doubt. I was just checking the lists for Alan Wilkinson's record. The alphas sorted list includes his name but no date of birth (which is unusual) and the Date of Joining List seems to exclude him completely.

Davie Kerr 6 years 4 months
I think (but won't swear to it) that this was the first Police Computer Section, in I believe 1987: from L:- John Skinner, John Van de Weg, Norman Wilson and Esther Trott.Editors note - You are spot on Davie, but I believe the year was 1989. John Skinner is providing more information and I'll post it ASAP.

Don Urquhart 6 years 4 months
Fairly middling effort, but remember I left 34 years ago, John Skinner on the left and Norman Wilson at number three. Don U Sydney.Editors note - We'll give you 50% on the photo Don. Two more to go, but what were they doing at the time this was taken?