Who's Who in this BFU Team?

This photo steps back in time to the era when Bermuda had an outstanding National Team that included several great police players.   We wonder how many people can recognize the members of this BFU squad when was it taken, who did they play against, and how many of the squad were policemen?  There is also one guy in the squad who could practically be identified in every respect as a police player because he turned up for work every day at our Police Traffic Department! 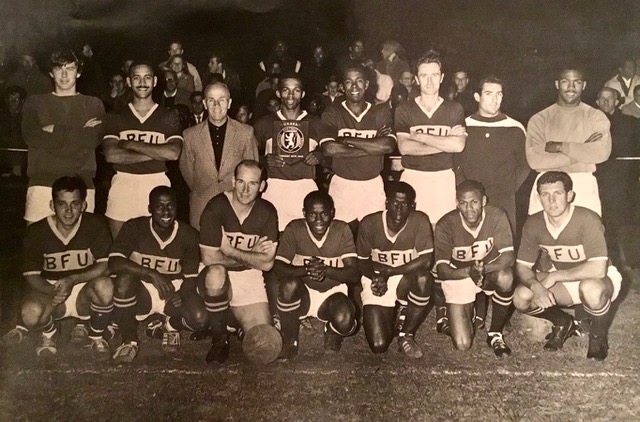 Davie Kerr 3 months 14 days
As I can't see any other comments on here, can anyone ID the other goalie (1st left, next to Beanie) and the other players?

Editors note - Not sure if he was a goalkeeper Davie. Will make more enquiries.

Davie Kerr 5 months 22 days
I believe that back row 2nd fro L is the one and only Arthur Headley Bean, Esq., officer and gentleman, although that tash does nothing for him!
I think the coach next to him is Tommy Warren, and I think the last 3 in the back row are Jim Lyons, Guiseppe Cammaroto and Sam Nusum.
Front row 3rd from L is Clive Donald (with Ben Swan next to him, but I've no idea on which side!). Leroy "Nibs" Lewis 2nd from other end. Possibly Alan Harker beside him?