COP Proud of accomplishments but not complacent 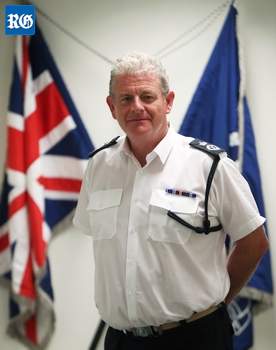 Commissioner of Police, Stephen Corbishley
(Photo courtesy Royal Gazette)
Today's Royal Gazette (31st Dec 2019) contains an article in which Commissioner Stephen Corbishley reflects on the hard work and success achieved by the officers and staff or the Bermuda Police Service.
Commissioner Corbishley said, “I am so proud of what the BPS have delivered, not least as much is unknown to the public. Indeed that should be the case, as I am a believer in preventing crime rather than sorting things when they have gone wrong.

Prevention means fewer victims, greater public safety, as well as increased community confidence — and that is our primary business.
Top of that list is protecting life, and this year has seen the absence of homicide, particularly involving firearms and a continuing fall in road-related deaths, while the thoughts and prayers of the BPS remain with those families who have lost loved ones.
To achieve the above we work in partnership with Government, local agencies and, above all, the public. The founder of the first police service, Robert Peel, remarked that the public are the police and the police are the public. That statement remains true — without public engagement and support, our job cannot be done.” 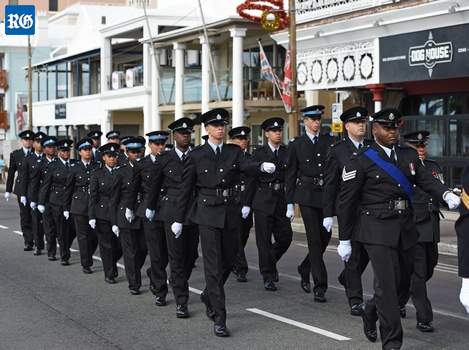 On duty: Bermuda Police Service representatives marching on Front Street
in Hamilton for Remembrance Day (File photograph by Akil Simmons)
You can read the full report on Commissioner’s Corbishley’s remarks in the Royal Gazette at http://www.royalgazette.com/opinion/article/20191230/proud-of-achievements-but-not-complacent
Editors note - On behalf of all of our former and retired Bermuda police officers we wish Commissioner Corbishley and all the men and women of the Bermuda Police Service all the very best at the start of this next decade. I’m sure that as former police officers we appreciate all the hard work and dedication required of police officers, and never more so than in these most trying of times.