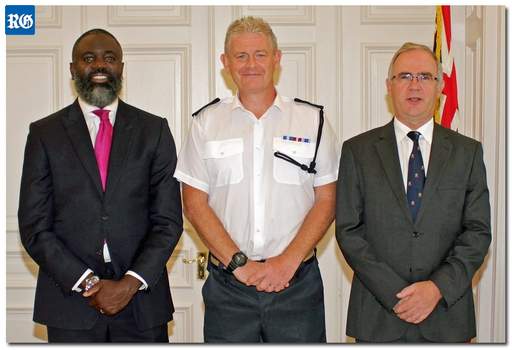 Our new Commissioner of Police, Stephen Corbishley, who just arrived on Island with his family, was officially sworn in by H.E. The Governor, John Rankin on Friday 3rd August 2018, as reported in the Royal Gazette at http://www.royalgazette.com/news/article/20180803/corbishley-sworn-in-as-police-commissioner

The ceremony at Government House was also attended by The Hon. Wayne Caines,  Minister of National Security.

Mr Rankin welcomed the new Commissioner and his family to the island and thanked Paul Wright for his period as Acting Commissioner of Police and for his continued service to Bermuda.

Mr Corbishley said that he was excited and looking forward to getting to work with his new colleagues in the Bermuda Police Service.

He added: “I am both delighted and proud to be joining the Bermuda Police Service.

I am committed to protecting and serving the people of Bermuda as Commissioner of Police and to leading the Bermuda Police Service in maintaining the highest international standards.”

On behalf of the Bermuda Ex-Police Officers Association we wish Commissioner Corbishley all the very best during his tenure in Bermuda.

Tony Laughton 3 years 10 months
Where did the photographer qualify? At the College of Badly-lit Photography? It looks like all of them have very blond side-whiskers.Editors note - See what you mean Tony. Unfortunately, when photographers are called to attend a press conference etc. they have very little control over lighting etc. It wuld probably have helped though if the three gentlemen stood a little further away from the wall!