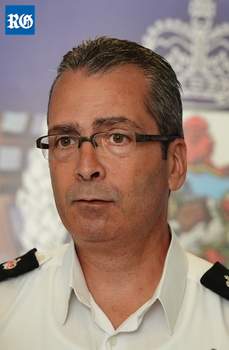 The Royal Gazette has reported this evening that Commissioner Michael DeSilva  will step down with effect fron 15th June this year after 8 years as Commissioner of Police and 32 years in the Bermuda Police Service.

Mr DeSilva said: “It was not an easy decision to retire and leave a career of over 32 years in the making.

“I am passionate about policing and I have dedicated my entire adult life to public service.”

Mr DeSilva added: “I am grateful to all of my colleagues, past and present, for their support and commitment during my tenure. It has been an honour and a privilege to lead so many dedicated and skilled police officers, support staff, reserves, and cadets."

For more details of the announcement see the Royal Gazette article at http://www.royalgazette.com/news/article/20180109/police-commissioner-desilva-to-retire

Commissioner DeSilva's retirement is also reported on BERNEWS at http://bernews.com/2018/01/retirement-commissioner-michael-desilva/

This is a surprise announcement but during his 32 year career, including his 8 years in the top job, Commissioner DeSilva has given exceptional service to both the BPS and to his country. Throughout his time as Commissioner he has been a great supporter of our Bermuda Police Ex-Officers Association for which we are most grateful.  We wish him all the very best for a long, happy and healthy retirement.

Davie Kerr 4 years 1 month
I remember Cadet DeSilva patrolling with me in Traffic in the mid-'80s! Best of luck to him on his retirement: any word yet on who his successor will be?Editors note - no idea yet Davie and I'm in the UK at the moment, returning home next week.

terry 4 years 5 months
After 32 years of service and "8" as Commissioner I would think he would have no problem slipping out the back door.To say best of luck would be silly on my part.How about just taking a day at a time.10/8 261