We had recently come into possession of this photograph of a group of people walking on what appears to be familiar territory to members of the BPS.  We wanted  to know who is in the photo, including the three rather shady looking guys at top left,  and what, where and when was this special occasion?

We had a great response, much of it on our ExPo Facebook page, and it made for interesting reading.  It was taken during the visit to Bermuda in 1984 by HRH Princess Margaret, and if it looks like familiar territory for our fellow police officers that's because it is!  It was taken on the walk from the Police Recreation Club passed the Police Headquarters Building, believed on the way for her Royal Highness to officially open the new police barracks.  We understand that one of the main reasons for the Royal Visit was  to present the Bermuda Regiment with their Colours.

In the photo, Her Royal Highness is accompanied by Commissioner Fred "Penny" Bean, and behind the Commissioner and Princess Margaret are Major Randy Butler of the Bermuda Regiment, and the COP's wife Mrs Elaine Bean. Behind them is Deputy Commissioner Clive Donald.

We were interested in ascertaining the identities of the three rather shady looking gentlemen in the top left of the photo,  and that's where we've had a little problem. We can confirm that the two on the left are Ross Matthews and Dave Pascoe, but we are not so sure about the guy on the right, Several of you were convinced it was Mike Rhodes but Mike has assured us that it definitely wasn't him.  He was on Island at the time and vividly remembers seeing Princess Margaret while he was on duty a Government House  -  when she took a swim in the pool wearing a bikini.  It's also been suggested that our 3rd man is Bryan Parkin, but Bryan left the BPS in 1975 although he remained on Island and operated a pet shop of Queen Street for many years.  If you think you can ID our mystery man please let us know. 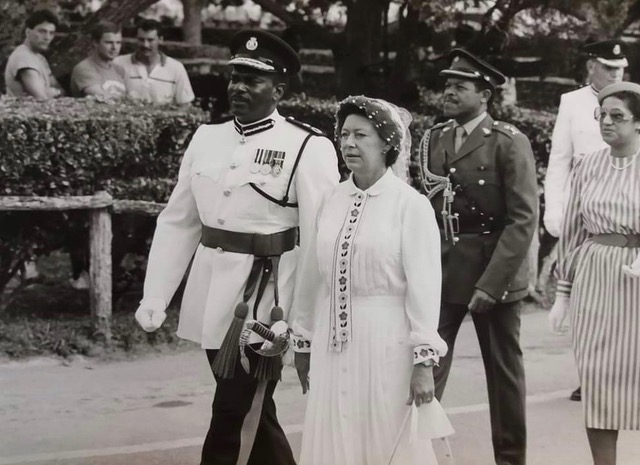 Royal Visit to Bermuda - 1984
HRH Princess Margaret is accompanied by Commissioner of Police, Fred "Penny" Bean,
as they walk from the Police Recreation Club passed Police Headquarters towards the
new Police Barracks which HRH officially opened that day.  Behind them are Major
Randy Butler of the Bermuda Regiment, and the Commissioner's wife, Mrs Elaine Bean,
and behind her is Deputy Commissioner Clive Donald.   Of the three men in
the top left corner we know the two on the left are Ross Matthews
and Dave Pascoe, but the identity of our 3rd man is still a mystery!

David O Meara 1 year 1 month
Last guess, could the guy on the right be Nigel Gyte who arrived with Russ Matthews and Dave Pascoe.Editors note - That's not a name familiar to me Dave bt let's see if we get a reaction from anyone else.