This group of "Happy Easterners" were clearly having a great time and one of them was armed with a microphone!   All have now been identified as shown below.  The only one in question was the guy wearing a sweater, and Moby Pett thought it might be Ron Firth who was an engineer (see Moby's comments below). while Brian Foster thought it was an engineer who worked for Dunkley's Dairy.  We checked with Michael Dunkley and he confirmed that it is indeed Ron Firth.   We wanted to know if you could recognize them, tell us what they were doing where they were, and when was this photo taken.  We also commented that you could find the answers elsewhere else on our website if you know what to look for and how to find it.

We can now identify everyone in this photo which was taken at a "Farewell Party" held at the St. George's Police Club in March 1970, for OIC Eastern Division, Insp Douglas "Red" Hebberd when he was transferred to Special Branch. In the photo are (standing l-r) Bernie Joinville, Ron Firth (civilian), Sgt Joe Colton, Inspector Hebberd, and seated is Sgt Brian Flook. CLICK HERE to view a photo of the full party gathering in our "Hall of Fame" article about Inspector Hebberd on our ExPo website.  Sadly, none of these  five of these gentlemen are still with us. 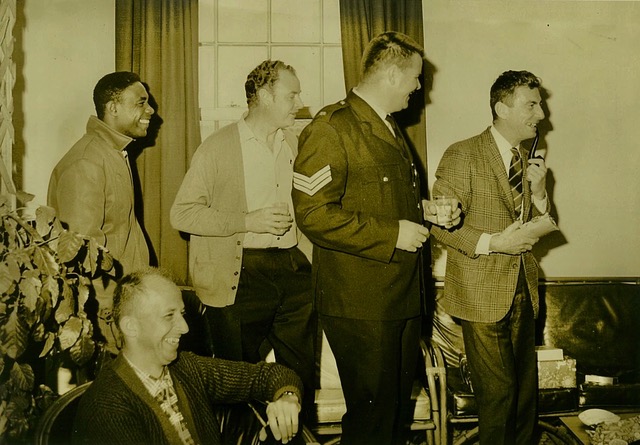 Davie Kerr 3 months 27 days
I too thought it was Alan Kennedy at first glance and the face does look vaguely familiar, but oddly enough I agree with Terry on this one....

Editors note - We've had a few suggestions about the identity of this guy and will try to sort it out.

Maurice Pett 3 months 27 days
I think it is Ron Firth. I believe he came to BDA as engineer on Queen of Bermuda ( or similar) and then was engineer at the old St George's Hotel, I have not seen him for years but he used to be a regular at Prospect and was resident here. Moby

Editors note - We also posted this photo on our ExPo Facebook page, and Brian Foster posted that he thought the gentleman in the sweater was an engineer at Dunkley's Dairy. It could be that Ron Firth eventually went to work at Dunkley's.

Editors added note - You're spot on Moby. I checked with Michael Dunkley and he confirms that it is Ron Firth. Sadly, none of the guys in this photo are still with us, inlcuding Ron Firth.

Editors note - Spot on Terry. We believe this photo was taken at Inspector "Red" Hebberd's farewell party in St. George's befire transferring to Special Branch in 1970. Can anyone assist with who is in the photo?

Territt Cabral 3 months 28 days
Burnie Joinville top left. Looks like Alan Kennedy but could be a civy from NASA.
Of course old 'Holy mother of God' Joe Colton and sitting is the Pied Piper, Brian Flook.

Editors note - Many thanks Terry. As I can see a larger copy of this photo I don't think it's Alan Kennedy, and I don't recognise the guy so you're probably correct that it's a civvy rom the Base. Can anyone else assist?