Having passed a police Grade 2 basic driving course and after a short period as the Central Division Duty Driver, I was posted to Beach Squad duties in mid-March 1966.

Beach Squad coverage often entailed split-shift hours especially throughout the period once known as College Weeks.  As well as active beach patrol the duties included maintaining a presence at the adjacent cottage colony properties in search of those who would break and enter, prowl or otherwise cause trouble.

So it was that in company with Constable 235 Thomas T. Hill I attended at a beach bonfire party beneath the cliffs of the Surf Side cottage colony in Warwick during the late evening of an April night in 1966. Wearing plain clothes, our intentions were to gather what intelligence we could about ongoing activities and upcoming events that might require a police intervention. No sooner had we mingled with about two-dozen college kids around the large fire than we saw a white male descending the steps of the cliff-face and stagger onto the beach. 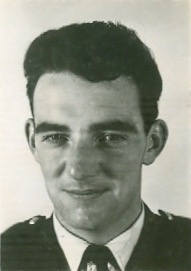 In the reflected glow of the bonfire we could see that he was wearing a policeman’s helmet and cape; that he was barefoot, wearing a swimsuit and had a beer can in hand.  Watching him approach the bonfire to howls of laughter from his friends it was clearly evident he had been drinking. We joined the crowd gathered around him and quickly determined the helmet and cape were indeed authentic and the cape showed the officer’s collar number. The imposter regaled all with the tale of how he had ‘sneaked away the uniform from the police station under their very noses’.

The party and the music moved up a gear. I left the scene and telephoned Operations.  It was quickly confirmed that the officer concerned had indeed misplaced his equipment. Late turn C.I.D was on the way and I led them down to the beach along a route other than the cliff-side steps. The young man was arrested without incident, stripped of his ‘uniform’ and assisted via police vehicle to a night at the old Hamilton station. Party time continued unabated on the beach – just as if nothing extraordinary had happened.

Appearing in Hamilton Magistrates’ Court the following day the American student was fined ₤20 for the ‘deliberate theft’ of a policeman’s cape and helmet from inside the Hamilton Police Station. In default of payment he was to go to prison for 21 days despite the fact that he was to leave the Island that afternoon. The magistrate was told by prosecutor Sgt. James Moir that the police did not consider the theft to be just another college “prank”.

The court was told that the student, from a college in Pennsylvania, had walked into  Hamilton Police Station to report that his cycle had been stolen. He had then taken the hat and coat from the officers’ rest room where he had seen the helmet sitting on a box and a cape hanging in a locker room, and decided that he “just wanted to take the things.”

In a statement to the police about four hours after he was arrested, the 22 year old said  he had seen the helmet on the box and moved it out onto some outside steps. He was given permission to use the telephone by the station officer and had moved the hat out of sight while making the officer believe he was using the phone.

“I came back again like I was going to make another telephone call and sitting in the locker room I saw a constable’s rain coat and I threw it through a window into the yard outside” he had told the police.

He then climbed over a wooden fence at the rear, collected the items and threw them over the board erected outside the police station. He then left the police station, retrieved the helmet and cape and rode off on his girlfriend’s machine, said Sgt. Moir. “The Prosecution take the view that this was a deliberate theft, rather than a simple prank. The defendant went to some considerable trouble to get the items out of the station without being detected.”

Before fining the defendant, Mr. Lownie observed that it was probable that his college would take a dim view “that you have committed a felony.”

Appearing somewhat surprised, the barefoot youth replied: “Think they will find out?”

Mr. Lownie answered, “No reason why they shouldn’t.”

1. I was very glad to have the report of the 12th April from Superintendent Fielders on the excellent work of the above Constables in recovering a Police helmet and raincoat that had been stolen from Hamilton Police Station.

2. This was an excellent piece of work on the part of both Constables. The accused, being a student, was fined 20 pounds.

3. Please tell both Constables that a copy of this note is being placed on the file of each.