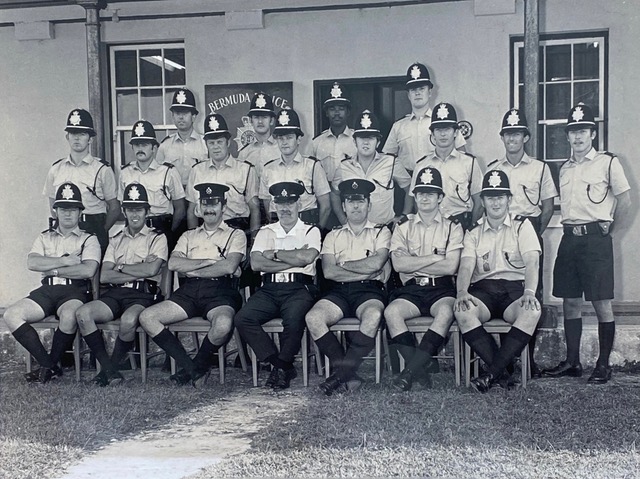 Dave O Meara 2 years 1 month
Hola Roger, he subject of nicknames is up again and in the past Ihave messaged you twice about my nickname Pointed Stick and shotgun not being shown on the list. It is still not there yet you have even mentioned it in you your story of your service in the Then and Now column can then please be added to the list. DaveHi Dave, I most sincerely apologise. For my money, yours is one of the greatest nicknames we have. Have made the correction.

Definitely not Cyril; he joined in July '67 in the first UK intake after mine.Editors note - For those reading these comments about Cyril, how many of you know Cyril's nickname which you can vew on our website at "Nicknames - A Bermudfa Tradition.

I always called him Squirrel........Editors note - That's a new one Terry but sounds right. Will add it to the list.

Davie Kerr 2 years 1 month
Two "Teasers of the week" here, and I don't know if anyone has a logical answer to them:-1) This crew all joined on either 14 Oct, 16 Oct or 07 Nov 70, and their numbers are 303 to 321. I can find no record of numbers 317 or 319 being issued before 1972, when they went to Dale Thornton and John Skinner respectively. Any ideas if they were even issued at all and if so who got them, and if not why not?2) Pete "Ellie Mae" Clemmet (308) joined on 02 Oct 70, is numerically with this group, but was on the previous Localisation Course: how come?Editors note - Dafinitely an anomaly Davie. Does anyone have a logical answer?

Davie Kerr 2 years 1 month
Cyril had a few nicknames, mostly I believe bestowed upon him by the late Mike Parris, among which were "Snidge" and "Dr Teeth" (the latter after the Muppet character who also had, ah, "conspicuous dental work"!Editors note - "Dr. Teeth" is so like Mike Parris! Will add themn to the list.

terry 2 years 1 month
As soon as I posted that comment I knew I had messed up.Cyril came along with Jimmy Costelo and 'aul det crew' after I joined February 1967.Oh well.Thyme for a beer.....

Davie Kerr 2 years 1 month
Definitely not Cyril; he joined in July '67 in the first UK intake after mine.Editors note - For those reading these comments about Cyril, how many of you know Cyril's nickname which you can vew on our website at "Nicknames - A Bermudfa Tradition.

terry 2 years 1 month
Mike Baker is in the other photo that was shown; standing on the left top.The guy behind Keith looks like Cyril Plant to me. Can't remember when he arrived.Editors note - As Terry rightly points out, Mike Baker, is shown in the Basic Training School Photo. I see what Terry means about this guy looking like Cyril Plant but having looked at the original photo itls definitely not Cyril who joined in 1967. Dave is 100% correct on this one. It's definitely Keith Beard.

Davie Kerr 2 years 1 month
I've also noticed that Pete Clemmet, despite having #308 which would tie him in with this group, was actually on the previous Localisation Course: any idea why?

Davie Kerr 2 years 1 month
With all due respect to Moby, I'm not convinced that that is Mike Baker: a) he was taller than that, and b) he had #78 and joined 21 Aug '70, whereas this lot had numbers from 303 (Brian Anderson) up to 321 (Raphael "Chalky" Honoré) and joined 14 Oct '70. Keith Bird (304) was on the same intake as this lot, so if that's not him, where is he?Pete "Ellie May" (so called because Boxy thought that Clemmet sounded like Clampett from "The Beverley Hillbillies"!) Clemmet was on that course, but I don't see him in the pic, and by process of elimination the big bloke beside Chalky has to be Angus Brown."M'Lud, the Prosecution rests its case!"Editors note - I thought it looked rather like Mike Baker but let's see what other responses we get. Does anyone know what Mike did after leaving the Police?

Maurice Pett 2 years 1 month
I think the guy behind Keith Pellow is Mike Baker, who I recall was Canadian and worked in the garage with Keith Pratt.Editors note - Agreed Moby.