We recently (in late August 2020) came into possession of this photo with a distinctive 'maritime' flavour and we could see some very familiar faces but what we needed to know is who was present, where were they, what were they doing, and when was it taken?  We also posted the same photo on our ExPo Facebook page, and  after a few comments we were deluged with a tremendous amount of information about what this was all about and who was involved as you will read below. 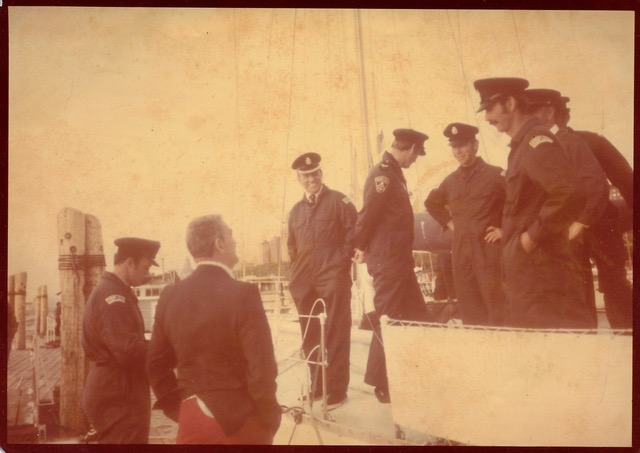 Arrival of the yacht "Hermit" (originally known as the "Oyster") in New York in the
Spring of 1976 after sailing from Bermuda with a crew of Bermuda Police Officers
(l-r)  Phil Phil Every,  COP  L.M. 'Nobby" Clark (with his back to the camera),
Jim McMaster, Gerry Ardis, Perry Fox, Stephen Petty (with moustache) and
behind him is Eddie "Boxhead" Foggo, and probably Bill Bryan

Editors note -   We are also ran this photo on our ExPo Facebook page and here are the comments we had received  on Facebook as of Friday morning 4th September 2020.

Don Urquhart 1 year 8 months
These events took place before I arrived in Bermuda in June 1977. However, one thing I had in common with Gerry Ardis and Jim McMaster was that we were all from Northern Ireland, and had served, albeit at different times in the Royal Ulster Constabulary. I remember that Gerry Ardis, soon after I arrived in Bermuda, taking me around the island in one of the Marine Section boats, a great introduction to Bermuda. I had a chuckle when I saw Gerry’s comment about the sea being a ‘wee bit choppy‘, which made a change from theNorthern Ireland term ‘very lumpy water’! Greetings to all from Sydney, Australia, keep well.

George Rose 1 year 8 months
According to Perry Fox, a Bermuda Police Reserve officer by the name of George Washington was the Navigator on this trip.George passed away about 3-4 years ago. He is said to be one of the concealed crew on the right side of the photo.Editors note - Please thank Perry for this informaion and for the photo which has sparked the interest of our members included "Old Salts" from Marine Section.