We recently poached this photo of a group of smartly dressed men from Pete Giles Facebook page   -  with apologies to Pete.  We were enquiring who is in the photo, when and where was it taken, and what was the auspicious occasion?

Yet again Davie Kerr strikes! He correctly identified everyone in the photo as follows:-

Back from L:- Des Waithe, Joe Colton, HE Sir Edwin Leather (aka Lord Vinyl), Nobby Clarke, Ian Kittle, Pete Giles.
Front from L:- John Headey, Terry Cabral, Linc Pratt. He also thought it might have been the occasion of the official opening of the new Eastern PRC in the mid=70’s.

We had in fact, published a copy of this same photo under the heading ”A Special Occasion Down East” (see http://expobermuda.com/index.php/who-when-where/224-specialoccasion ) back in March 2013 after receiving this and another photo taken on the same day sent to us by John Headey who remembered the occasion very well indeed.  John explained that at the time he was Divisional Clerk for Eastern Division which included being Treasurer of St. George’s PRC.  John was directly involved in overseeing progress on the building of the new Eastern Division PRC which he describes as a “vast improvement” on the old building. The gathering was for the official opening in late 1976 and largely consisted of the then “Management Committee”. 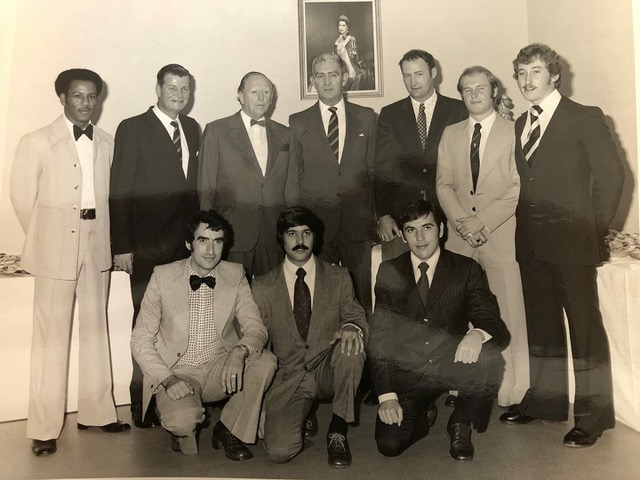 Sadly, both the St. George’s and Somerset Police Clubs have now been closed as a cost cutting measure.

We have yet to establish the exact date of the official opening but it is recorded on the plaque that was unveiled that day by H.E. Sir Edin Leather.  Unfortunately,  all the contents of the St. George's PRC disappeared into storage a few weeks ago and we are trying to track them down to confirm the date.

Davie Kerr 4 years 7 months
Oh, and you're correct: I didn't go East until 1990, but spent my last 10 years down there while living in the Bierman Estate on Ferry Reach.

Davie Kerr 4 years 7 months
John, it may have previously escaped your notice, but I am an absolute mine of totally useless information: for instance, I can tell you every car number my father owned between 1950 and 1980, but oddly enough nobody ever wants to know!It may also have helped that I was, and still am, a non-drinker, so most of my brain cells are still in circulation.....Editors note - yes, you definitely were a non-drinker Davie but I've heard of some health risks associated with consuming too many Mars bars!!!

John Headey 4 years 7 months
My reply seems to have been lost somewhere.Davie as usual has it spot on . Names and occasion as he says. (How do you do this Davie ? you were never down East as far as I can recall .)I have a few more photos of this event and will post when I can find them. A lot of work went in to the preparation of the new PRC, I’m sorry to hear that it is no longer exists as I knew it.Editors note - Many thanks John. Terry Cabral pointed out that I had previously published this same photo in our Who, Where and When column at which I also published some extra photos you sent. The only missing information is the exact date of this opening.

Davie Kerr 4 years 7 months
Well, the WHO is easy enough. Back from L:- Des Waithe, Joe Colton, HE Sir Edwin Leather (aka Lord Vinyl), Nobby Clarke, Ian Kittle, Pete Giles.Front from L:- John Headey, Terry Cabral, Linc Pratt.The WHERE, WHEN and WHY may not be so easy, but, judging by the fact that all the Policemen except Nobby are Eastern, might it have been the opening of the new Eastern PRC some time in the mid-'70s?Editors note - many thanks Davie. Spot on except for the actual date. It is the official opening of the "new" St. George's Police Club. I gather from Terry that we have previously published this same photo, along with all the details, but I'm in the UK at the moment with very limited access to Internet and I havn't been able to locate the first publication of it.

terry 4 years 7 months
What happened to the replies with regard to this photo. :-|Editors note - Terry, I'm in the UK at the moment and don't have the best access to the website but I don't recall any replies as yet, although I have to admit that I just spent an hour deleting hundreds of comments from bloggers who have nothing to do with ExPo and post comments selling their products. etc. I do believe we have previously posts this same photo but searching the website on my IPod with a super slow internet connection is impossible at the moment.Please feel free to submit your recollections of this photo.