We had recently come into possession of these photos of a special event involving this group of police officers, and asked if you could identify all nine men in the group photo,  and tell us what event it was, where and when it took place, and any other details about it.   We added two additional photos taken at the same event and wondered if you could assist in identifying both the runners and the spectators and officials.

We certainly had an excellent response and would like to thank Dai Thomas for kindly providing the photos.  Dai knew more or less what the photos were about because he participated as one of the runners but he wasn't certain of some of the details we were seeking.

First of all, Phil Taylor had no problem identifying everyone in the group photo, all of whom were serving police officers when this event took place in 1980.   We also had no problem identifying the Police runners involved in the baton exchanges, and also quite a few although not all of the spectators and officials in the background.  We have included these names in the caption for each photo.

One issue arose regarding the two men on the extreme left of Photo 2.    There was no doubt abour one pair of knees belonging to Dave Barber on the left,  and the guy to his immediate right is former Sergeant Edward "Jim" Woodward.  Dave O'Meara queried whether it would have been Jim Woodward because he noted that Sgt Woodward left the Force in 1967, well before event took place.  However, we checked with Jim, who now lives in Florida with his family, and he confirmed that he was still living in Bermuda with his wife Judy and family in 1980.  Most of us who who serving in the Police Force at that time will no doubt remember that Jim left us to become General Manager of the Rosebank Theatre for about 10 years and continued to work in Bermuda until he and his family left the Island in 1994.

Jim not only confirms that he was at this event,  but he was actually responsible for organizing it!  He was a member of Rotary at the time and the President had asked him to organize a fundraising event.  Jim liaised closely with Jeff Payne and they came up with the idea of holding a 24 hour marathon event for charity, with changeovers taking place at Saltus Grammar School sports field which is where the photos were taken.  We understand that the event had about 6 teams participating, including our Police Team, and the reason for Jeff Payne not being in the team was that he was in a team comprising Bermuda's top runners.  The event raised some $17,000 and we understand it was one of the first events organized under the auspices of the Mid Atlantic Athletic Club.

All in all, a very successful event and our thanks go out to all those who assisted in answering who, where and when! 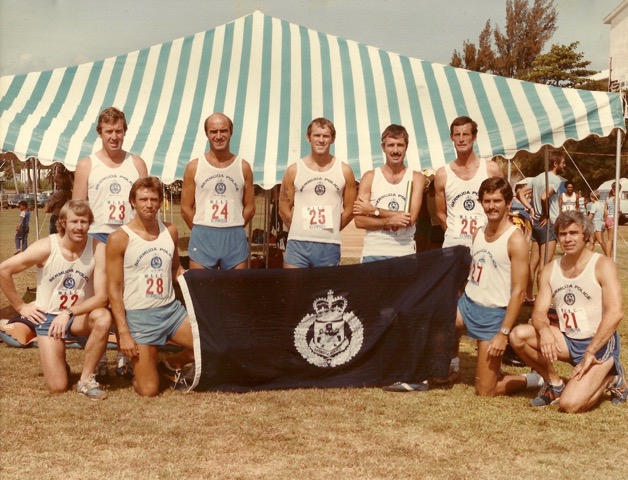 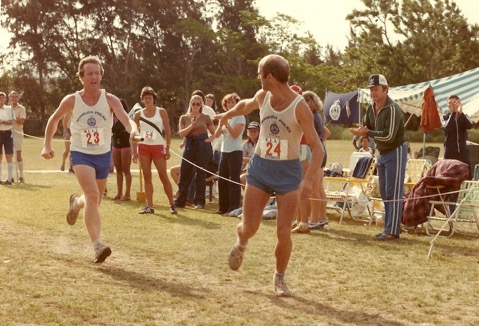 Dai Thomas hand over baton to Gerry Benson
At left of Dai are Dave Barber in dark shorts, and former Sgt Jim Woodward in light shorts
Jim was resposible for organizing the event with the help of Jeff Payne.
Also in the photo are Hazel Clifford in red shorts,  Pat O-Riorden with cap and striped track suit,
and Kevin Reeves clapping on the right
Photo 3 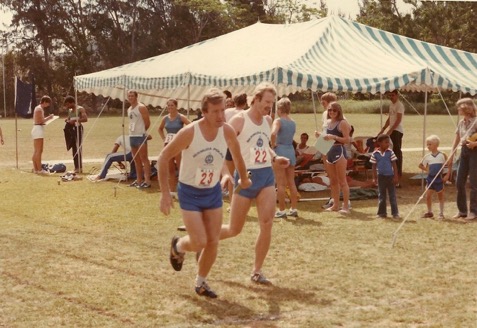 Dave O Meara 6 years 9 months
Hola believe the female behind Dai T in photos 3 is Jane Christie while the female all in blue with her back to the camera behind Alan is Elaine Watkinson or Wilkinson, use to be the Government drug analyst.Dave OEditors note - Agreed on both counts Dave. Top marks. Margaret Young is just to the right of Elaine.

Jeff Payne 6 years 10 months
Hi Roger. It was a charity run, I believe for St. John's ambulance, and raised, I think, about $17,000.00. There was a national team running, of which I was part. It was at a time when clubs around the world were doing these 24 hour runs.Haven't heard of it in recent times.Editors note - Many thanks Jeff. We now just need to confirm where this event took place, and possibly identify a few more people around the runners doing their handovers.

Davie Kerr 6 years 10 months
Re the Woodwards: Edward James (always known as Jimmy, as far as I recall) was the Admin Sgt who met my crew on arrival in Nov '66. He and his wife Judy had two sons (whose names escape me), one of whom I think spent a short time as a Cadet but I won't swear to it.I've looked at Coop's Small List (as opposed to Coop's Big List) and note that, as well as sharing two out of three Christian names, the Woodwards also share the same day and month of birth. I have noticed a few coincidences/duplications in that list, and wonder if this may be another?Editors note - Many thanks Davie. Have written to Jim about Dave's observation re whether he was still here in Bermuda in 1980. Will also check the Police Register at Prospect re any othger Woodward's on the Force or in the Cadets.

Dave O Meara 6 years 10 months
Hola Roger, re Jim Woodard, there are 2 listed in the listing Dave Cooper compiled both with the first name of Edward Sgt 30 left in 1967 before the other runners in the photos arrived and the other is listed as Constable 196 who left in 1984 is this the correct Sergeant Jim Woodward Dave OEditors note - Good point Dave, but Jim Woodward stayed in Bermuda for quite a few years after he retired before moving out to Western Canada. To the best of my recollection that was about 20 years ago but will check with him to confirm whether or not he was in Bermuda in 1980 when this event pook place.

Dave O Meara 6 years 10 months
In photo 1 right side guy behind Mike Jent is Bob Oliver while the lady in photo 3 left side in white shorts is his wife Midge Oliver could the officer standing by Dave Barber by Mark Cartwright who I think worked down West before joining Narco Dave OEditors note - Many thanks Dave, Spot on re Bob and Midge Oliver. The man standing next to Dave Barber is former Sergeant Jim Woodward. The copy I have of the photo is sharper than the copy displayed on the website and it is definitely Jim who I have written to, and who confirms that those are his knees!

Alan Cleave 6 years 10 months
This was a 24 hour charity fund raiser. I believe there was six teams participating. Each team member ran a mile and handed the baton over to the next team member. We continued the routine for the 24 hours. Gerry Benson would no doubt recall the charity the funds were raised on behalf of.Alan CleaveEditors note - Many thanks for your input Alan. I was surprised not to see Jeff Payne in this team. Did he participate with another team?

Phil Taylor 6 years 10 months
Back row in #1, Dai Thomas, Gerry Benson, Phil Holder, Mike 'Dagwood' Rickards, Bob 'Pudsey' Hay; kneeling, Alan Cleave, Ian Coyles, Kevin Reeves and Mike Jent.Photo#2, Dai Thomas handing off to Gerry Benson and is the Pat O'Riordan on the right wearing the 'dickhead' hat? Could it be Peter Stubbs standing next to DB?Photo#3, Clevie handing off to Dai with Phil Holder in the background.Editors note - Spot on Phil, and yes, you're correct re the runners handing off. And yes, that definitely Pat O'Riordan. Does anyone know how we can get in touch with Pat these days. However, it's not Peter Stubbs standing next to Dave Barber. It is Jim Woodward who is now living out in Western Canada. He's confirmed that he is in the photo but couldn't recall the actual event.

Davie Kerr 6 years 10 months
Thought I'd already commented on this lot, but no matter.....Pic 1: back from L:- Dai Thomas, Gerry Benson, Phil Holder, Mike Rickards, Bob Hay.Front from L:- Alan Cleave, Ian Coyles, Kevin Reeves, Mike Jent.This was I think a charity run where teams had to run relays non-stop for 24 hours, or something equally challenging, and well done to all concerned for their efforts!Editors note - Right on Davie. I delayed posted your reply for a while to see what other readers might say. You will see that Phil Taylor has also submitted the same names for the team without have previous sight of your post. You are also correct about this being a 24 hour non-stop run, but can anyone elaborate on who organized the event and maybe pick out a few more people in the photos?

Terry 6 years 10 months
Now there are some good memories.Only two I forget are the front row left.Alan Cleave?Great day to all.Editors note - That is Alan Cleave. Anybody know how Alan is doing these days?