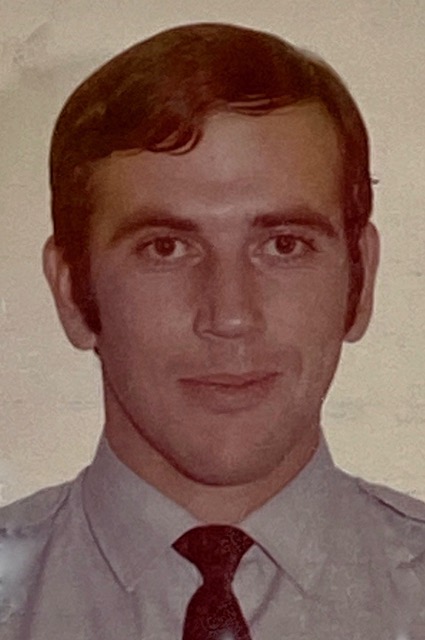 I was born in Woodford Green, Essex  on 30th May, 1946 and lived in Woodford, Wanstead and Walthamstow before moving to Felixstowe, Suffolk when I was 10 years old owing to my father’s ill health and bankrupt building business. My parents bought a back street newsagents and tobacconists shop.

I left school aged 15 in 1961 to join the Junior Leaders Regiment Royal Artillery in Bramcote, Nuneaton as an apprentice Surveyor R.A. After getting my trade qualifications, I was posted to Dortmund in West Germany with 27thArmy Missile Regiment, which was a Corporal missile regiment. Our role was to survey in the exact location of the missile launch site and later compute the fire orders for the missile.

I twice travelled to the Outer Hebrides which was an annual exercise to practice firing the missile. I was lucky enough to holiday there three years ago to witness once more the beautiful white sandy beaches, more like the Pacific than a Scottish beach.

Owing to my father’s ill health and the fact that he was now on his own in the family back street corner shop, I got a compassionate discharge, cost £500.1.0d, and left in 1965.

Whilst waiting for the admin side of my discharge, I was sent to help caretake the NATO sailing club on the Mohne See which was one of the reservoirs whose  dams  the Dambusters attacked. A highlight there was, together with another army colleague, to be the first people to walk across the Mohne See when it froze, albeit we were 15 yards behind the clubs very large and heavy german shepherd and felt if he didn’t crack it neither would we.

In celebration of our achievement, the local Germans treated us to free drinks all night with the obvious outcome.

I spent four years working with my father in our shop and after his death I worked as a sales rep and then as an export shipping clerk and again a salesman for our shipping lines and finally a clerk in the US Army Sub Terminal.

In 1972 I was made redundant which seemed like a good opportunity to travel to the USA and visit my two sisters in Massachusetts and Nebraska. They had both married US servicemen. I also had   a good  friend in  San Francisco to visit. This was all achieved on a six month go anywhere Greyhound bus ticket which was a great experience.

Whilst in San Francisco, I was interviewed for a job with United States Lines (shipping) as a sales rep which I was thrilled with but unfortunately whilst back in England waiting for the work permit, the job fell through as they couldn’t wait for the permit any longer. It was this job offer that put me in the mindset that I wanted to work abroad.

I had an interest in the police but the pay was less than I was earning as an export shipping  clerk and at that time I had an overdraft so it was a non starter. An advert for The Bermuda Police in The Daily Express took me to the library to find out where Bermuda was !!

My application was accepted including an interview in London at Tintagel House which was a Met Police building. I think being ex army and a rugby player was helpful.

My son Chris works in construction in London and his firm specialises in refitting office buildings. To my great surprise when I asked him about his then current project, he was refitting Tintagel House which I think the Mets had sold off. Small world ! 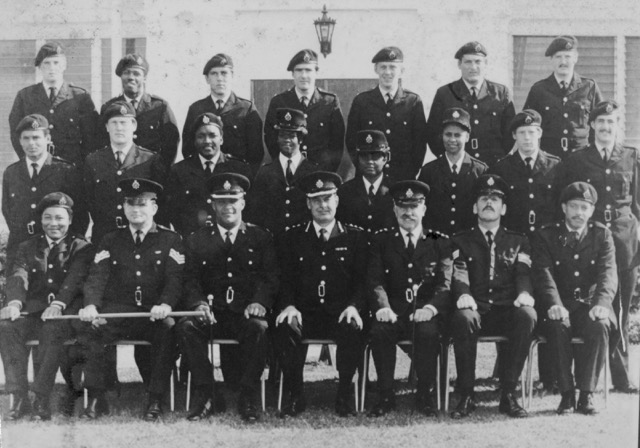 I was posted to Somerset but brought my girlfriend out in March and as she had secured a job at the Airport I was transferred to St George's. Linda and I  married in Hamilton Registry office, Keith Melville was my best man and "Tinny"McCann from the Robin Hood was my other witness. Champagne at the Robin Hood was followed by a reception at the Canadian Forces base which included a lovely wedding cake provided by the local WPC’s from my course.

Linda and I lived in a lovely small cottage in St.George's owned by the Roberts family, near Holiday Inn, our next door neighbours being Jimmy and Pauline Copeland (both teachers) and their three children. Jimmy has passed but we are still in touch with Pauline. 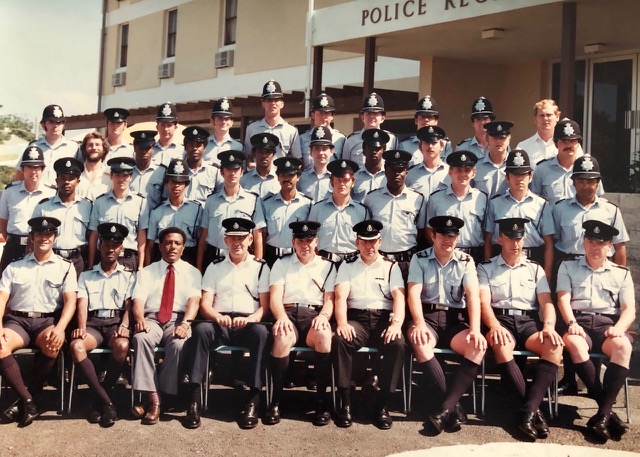 Alan Kennedy was my sergeant in St George's and amongst others, Stan Gough, John Headey, Legay Farley and Ian Morrison were on our team. George Garrod was our Inspector and two of the other sergeants were Brian Flook and John "Rigor" Morris. All nice guys. We had a new Police Club which opened whilst I was there and it was a great watering hole. Always great to hear someone ringing the bell announcing they were sponsoring the next round of drinks.

I played rugby for the police second team and always enjoyed weekends spent at Nationals Sports Club. We were encouraged to network with the local community so taking this on board I moved to Mariners Rugby Club. They were a great bunch but I didn’t enjoy getting beaten most weekends.

The riots in 1977 subsequent to the hanging of Burrows and Tacklyn for the murders of The Governor, Police Commisioner and supermarket managers were very impactive and polarised the community. One of my roles during the height of the crisis was to ferry officers from St. George's to Hamilton where the main riots were occurring. On one such return journey single crewed, a local man was brandishing a large machete on the side of the road making gestures towards me. I stopped further along the road requesting back up to deal with it. We had no one available and I was told to leave the area. Not a good feeling.

To save Scenes of Crime officers coming out to the ends of the Island, one person from each section was trained to search for and photograph fingerprints left at the scene of a crime. I was one such person on my section and this engendered in me a great interest in that, together with photography in general and I successfully applied to join Scenes of Crime at HQ and that is where a spent my last year.

I have great memories of working with the likes of Merv Willey, Phil Bermingham and Paul Farrell and Graham Alderson.

Two stories come to mind. The first fingerprint mark I found   at a scene in my new role I took to Merv as he was “the man” for fingerprints and he confirmed my belief regarding the identity of the  offender. Proud of my achievement I phoned the officer in the case to update him so he could progress his investigation.
I was mortified when he contacted me at some future point to announce I was wrong as the said man was in prison. Being the new man I was embarrassed but spoke with Merv who confirmed it was definitely him. Imagine my pleasure when the OIC, having been told it was definitely him, called me when he discovered  the suspect had been on home leave for the weekend. Result!
The second story surrounded a burglary and theft at Astwoods Jewellers on Front Street. Recovered from the scene amongst other things was some tissue paper which was subject to the Ninhydrin process. I cannot emphasise enough how poor the marks were and how few characteristics there were.
Merv was able to identify the offender from the little he could see and the man was arrested and admitted the crime. It was an amazing story. The offender had been drunk on Front Street and was in the doorway of the jewellers when leaning against the front door it gave way as it had not been locked. So two bags were filled with jewellery by this man who  then rammed them into a large litter bin in the town.
When he woke up the next morning he wondered whether he had been dreaming but sure enough the bags were still in the bin. He then stashed these on a cliff on the Eastern end of the Island and after his arrest he took the police to this spot and I was told saved one of the officers from falling down the cliffs during the recovery of the bags.
Two of Astwoods employees had to spend two days unravelling the contents of the bags which had just been grabbed and stuffed into the bags by the drunken offender.
Editors  note:-  CLICK HERE to view our in-depth article on the "History of Forensic Photography in Bermuda" which includes photos of the Scenes of Crime officers mentioned by Linc who is also listed in the article as jhavig served in Scenes of Crime from 1977-1978.
When I joined Scenes of Crime, I was in it for the long haul. Meantime Linda and I  had conceived our first child and lengthy thoughts and discussions about the way ahead concluded in our decision to return to the UK at the end of my 5 year contract so we left in August of 1978 and our first child Helen was born in October. Have I thought about what life would have been like if I had stayed and spent my whole career in the  BPS?  Yes but overall I have no regrets.
In May of 1979 I joined Suffolk Constabulary and spent a very enjoyable 27 years in uniform, CID, Special Branch, Crime Prevention and retired at 60 as an Inspector  in a rural sector based at Hadleigh in Suffolk.
Soon after I retired I successfully applied to be a police recruit applicant assessor which included role acting. This took me to various police headquarters and also The College of Policing at Ryton on Dunsmore. It was just casual employment as such, typically a weeks contract here and there. Since the pandemic the assessing has been conducted online so that was  more training but its very convenient working from your study at home.
I also work as an independent member of a final selection panel for a fostering agency reviewing the suitability of prospective foster carers. I have been doing this for 15 years but am still humbled by the compassion of the applicants who put themselves on the line in what is a very life changing experience.
At the time of writing, May 2022, I am approaching 76 years so I feel very much in the twilight of these latter work roles  but while I still enjoy them I will carry on. 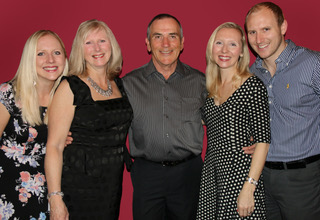 Linc and Linda with daughters Helen and Danielle, and son Chris
Linda and I have  two daughters Helen and Danielle and a son Chris. They have provided us with 7 grandchildren so life has been pretty busy and very fulfilling.
We have travelled regularly to The Villages in Florida where one of my sisters lives and more recently met Brian and Carol Foster there and Pete Giles drove up to visit us aswell.  The Fosters have now returned to the UK.
Linda and I have not returned to Bermuda since 1978 but hope to celebrate our golden wedding anniversary there in April 2024.
Published on 31st May 2022

Territt Cabral 2 months
Linc was a great guy and still is.
Worked with him down East at times when I was in CID.
We were good friends and both were members of the Management Committee of the St. George Police for a few years. Spent many social days/evenings at the PRC or over at the US Base and other haunts.

Best to him and Linda and family and I hope they do return to Onion Land next year.
Sholom.