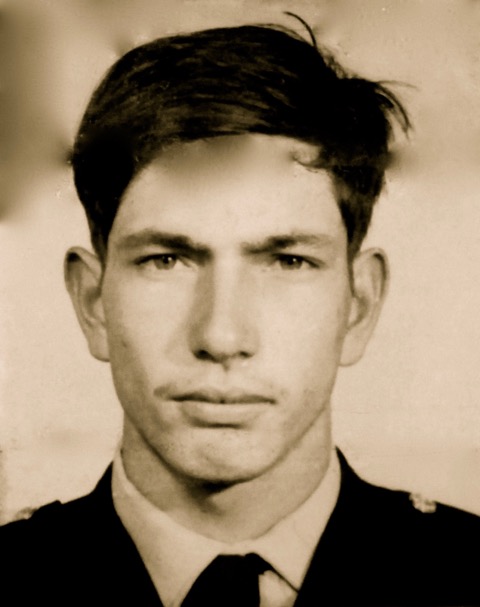 When I joined the Police Force in 1966 there was a lot of mistrust between the Police and youth, in particular blacks. As a young constable I was spending a lot of time visiting Spanish Point which later became part of my patch when I became the Unit Beat Officer, then Parish Constable. It was not unusual for me to go into the park at “The Point” when in Police Uniform. I would speak to the children and youths who would be kicking a ball or riding their bikes. I would get the usual anti-police, anti-limey comments. However, when challenged, no one really knew why they hated the Police or English. I noted that both black and white kids were very talented in riding their bikes. They could do “wheelies” travelling long distances on one wheel. They could balance for some time on stationary bikes, yet could also ride extremely fast. I would compliment them and receive the standard reply, “I am the best on the Island “.

“How do you know, have you raced everyone? If not, would you like to so you can prove how good you are?“ would be my answer. Of course they replied “Yes”.

At the time I was helping run a Scout Troop and doing a Gabriel Richards Leadership Course. One of the people on the course was a black man named Everett Nance from the southern USA who was the director of the newly formed YMCA. I spent some time with him at the “Y”, looking at his work, and discussing different matters, in particular Bermuda’s Police race/youth issues. I was impressed with the way he handled hostile youths. If I handled people that way, I would have been called a racist and accused of Police brutality. I bounced the idea of a children/youth pedal cycle competition run by the Police. It was agreed the Police did not have enough community respect to run the function on their own, but if it was a joint venture with the YMCA, it might just work.

We drafted our plan, and I prepared a report for the Commissioner of Police with the proposal of a joint Police/YMCA youth cycle competition. Each person taking part would get a certificate with both the YMCA and Police badges on it. I stated I was confident that I could get trophies, prizes and even gold, silver, and bronze colored medals donated.   I suggested we present the medals the way they did in the Olympics. My sergeant, Sgt Hilton Wingood was very supportive of the idea, as he forwarded it with his recommendations, but warned of strong opposition.

Weeks passed and I had not had a reply. One day I was running a Scout camp with some other Police officers, when we were visited by the Minister for Youth and Sport, Mr. Lancelot Swan, and Bermuda’s Youth Coordinator, Mr. Reggie Ming. They were impressed with what they saw, black and white kids living together, learning together and generally having fun. The kids looked upon the Police [I believe they were English and West Indian] as big brothers. “If this works here than why not in the rest of the island? Why can’t the Police as a whole do what you’re doing here?” asked the Minister.

I explained my idea of a children/youth cycle competition, sponsored by the YMCA and the Police. “But when and where would you hold it?” he asked. My quick reply was that I would work on the project, as soon as I got the go ahead, and proposed to have it at Bernard Park. It was central to a poor class white school [Dellwood], a Catholic school [Mt St Agnes], a black school [Central], and a rich white boys school [Saltus]. I gave a history lesson about my days as a kid when I had to cross the park each day to go home and to school. Some of us called it “Blood Park “ because of the turf wars that were fought over it. The more we discussed the matter, the more supportive Mr. Swan and Mr. Ming became. “You will have your competition and let me know if other Police officers give you any problems over this. I will regularly check with you for progress reports “ the Minister said.

The next day I was ordered to go to Police Headquarters. Although not sounding supportive, a Superintendent gave approval for the event. A condition was that all work had to be done in Officers’ own time. I was also given 4-5 weeks to complete the project.

The next step was forming a committee. At that time one of the most popular TV shows was “Mod Squad” about cool black and white detectives. I saw the value of a mixed race Police committee. I approached a number of officers, most who offered to help behind the scenes and on the day. Gary Perinchief put his hand up when I mentioned we would be a form of Mod Squad. “I’ll be the cool black dude “, he said. Right, now we needed a white guy. A number of people pointed to Roger Sherratt. He had excellent organizing ability and was highly respected by the community. Roger agreed to join us, and I believe he came up with the name “Pedal Cycle Gymkhana”. 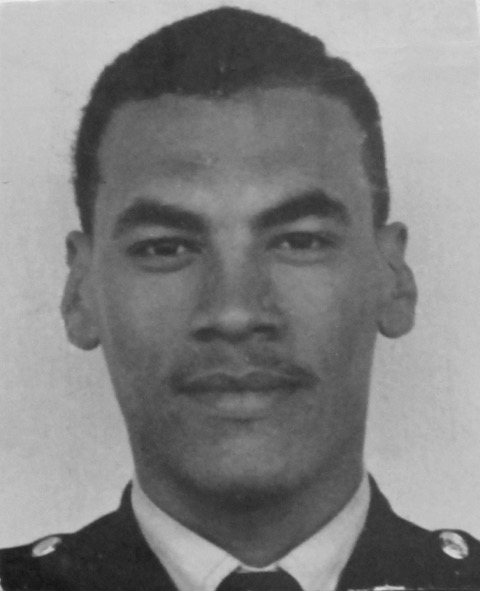 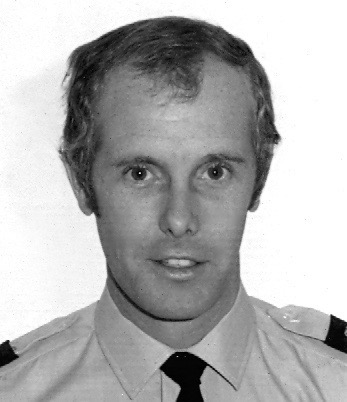 We worked very fast organizing the event. We approached business from all parts of the community for trophies and prizes. I remember thinking aloud that to really get the support of the black community; we should approach the Bermuda Industrial Union [BIU]. "What are we waiting for," shouted Gary, pushing me towards Roger’s Fiat 600 [car]. Looking back we must have been crazy and looked strange. Here were 3 cops in a small car going into an area where Police were not welcome, asking for support for a Police run function.

I have no doubt that Union officials were surprised to see us. As we explained to Mr. Ottiwell Simmons and members of his committee, we were not asking for anything for ourselves or the Police, but for the youth, black and white. It was only reasonable that if white firms supported the project, so should black organizations. The Union Officials strongly supported us and agreed to supply a trophy, provided it was made by members. I believe that the BIU gained a lot of respect for their support of the project from both the black and white communities.

In our own time we visited as many schools as we could in all parts of the Island. We gave press releases and spent hours at the YMCA producing and processing entry forms. I recall one night falling asleep whilst drawing charts.

Despite some good support within both the community and the Police Force; there was also negative feedback, some of which is not fit to be printed. A common remark I would get from kids was, “I aint racing some ……. white kid “. My reply would be, “I understand that, because you have no hope of beating them”. In case of negative feedback from whites, I would tell them they were no match for the black kids. Needless to say this really stirred up my young friends who were determined to prove me wrong.

I got the strong feeling that a small group of extremist people, black and white, wanted this project to fail, because they would lose their sense of superiority. We managed to get the Police caravan with our gear in it to Bernard Park the night before the event. There were rumours that youths on motor cycles planned to attack the caravan. With other officers, including Gary Perinchief and Roger Sherratt we spent the night on site. Sure enough, late at night we could hear cycles assembling nearby. I believe it was Gary’s idea, as the bikes roared towards us we lit them up with spot lights then fired starting pistols into our public address system. It sounded like cannon fire. At daylight we found 2 or 3 damaged bikes in the bush, which were not there the day before.

We had scheduled the event for 2 days. Over 500 kids and youths poured into the area before starting time. There were a lot of late entries. They came from all backgrounds with old bikes, new bikes, bikes that had been mongrelized from parts of different bikes. I was assured that none of them were stolen! We even had one of our Police mechanics examine every bike to make sure the brakes were working and were properly adjusted. 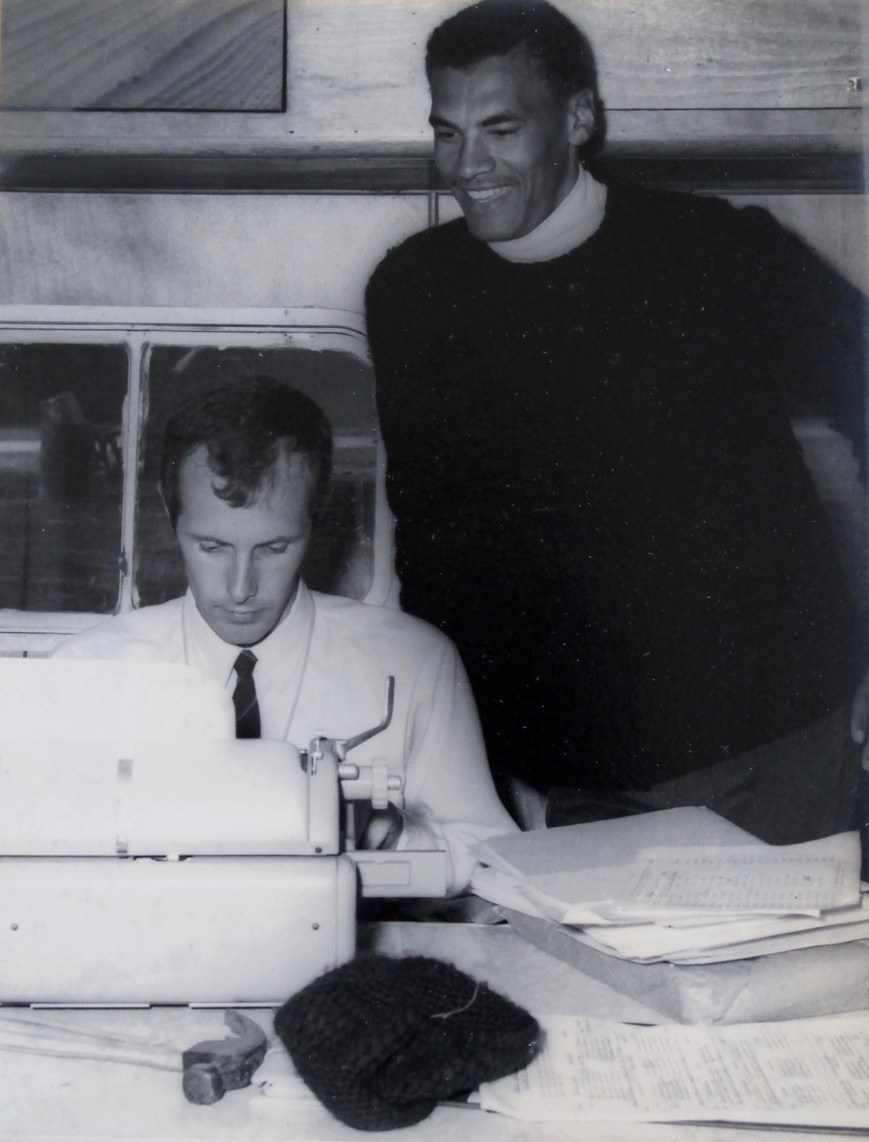 Roger’s organizing ability kicked in as he coordinated the races and planned extra events. We had a variety of bike races, ranging from short sprints, lap races around the Park, slalom races between Police traffic cones, slow races where the winner was the last one to finish without touching the ground with their feet, and obstacle races where the kids had to dip their heads into a bucket of water to take out an apple, then crawl under a net (without their bikes), and finally they had to jump into a sack and push their bikes across the finish line while still in the sack!. Extra events included a karate display, a display by the Police Motor Cycle Display Team, and for the finale we had the Gombeys performing in front of a huge audience.

The Police Motor Cycle Display Team was a huge draw
and proved very popular at special events throughout the Island.

It was heart-warming to see the number of volunteer Police officers, Bermudians, West Indian, Irish, Scottish and English who came to help. There was also a large crowd of spectators and supporters, some say well over 5,000. There were even reports of businesses closing to witness the event. 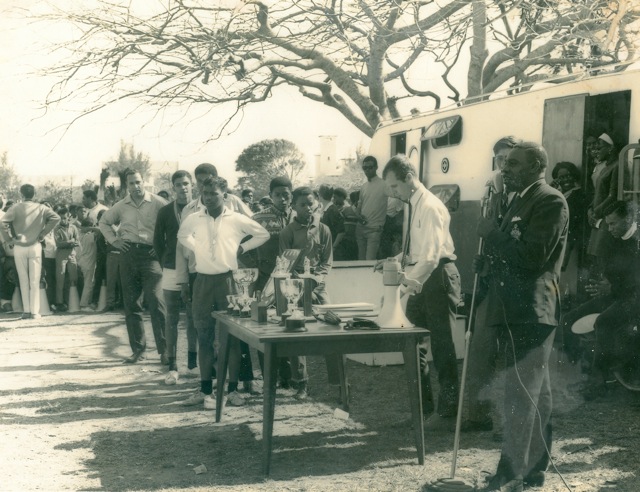 Prizegiving at first Police – YMCA Pedal Cycle Gymkhana held in Bernard Park in 1969.
The Minister of Youth and Sport, the Hon Lancelot Swan presented prizes.
Also include in the photo are Everett Nance (Y.M.C.A. Director), Roger Sherratt,
Ray Sousa (behind the Minister) and Gary Perinchief (seated behind the Minister) 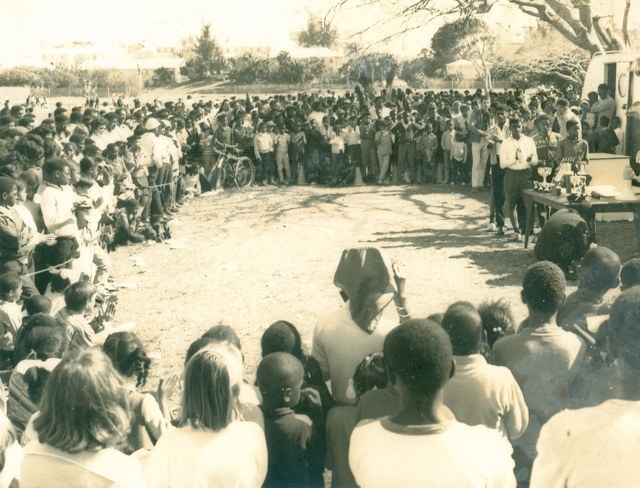 A large group of spectators watch the prizegiving

Due to the help we received I was able to spend time witnessing events and talking to competitors and spectators. There was the occasional racist remark, which we quickly sorted out. I saw a lot of good sportsmanship, with competitors shaking hands after events. I saw kids from both white and black families talking to each other, no doubt upsetting some parents. I saw kids examining each other’s bikes, giving minor first aid to those who got injured. I have no doubt that friendships were formed from that event, and at least for two days in Bermuda’s history the Police were heroes in the eyes of the youth of the Island.

After the event I remember Gary saying, “Do you realize that for two whole days, we had the whole of Bermuda in the palm of our hands.”

I saw things a lot differently. We started with a very simple idea that led to people showing respect for each other. The event succeeded because of excellent cooperation between many Police officers and the YMCA, the support of the Minister for Sport and Youth, and our sponsors including the BIU. But most importantly Bermudians from all walks of life, despite any prejudice they might have had, were willing to “Give Peace a Chance.” 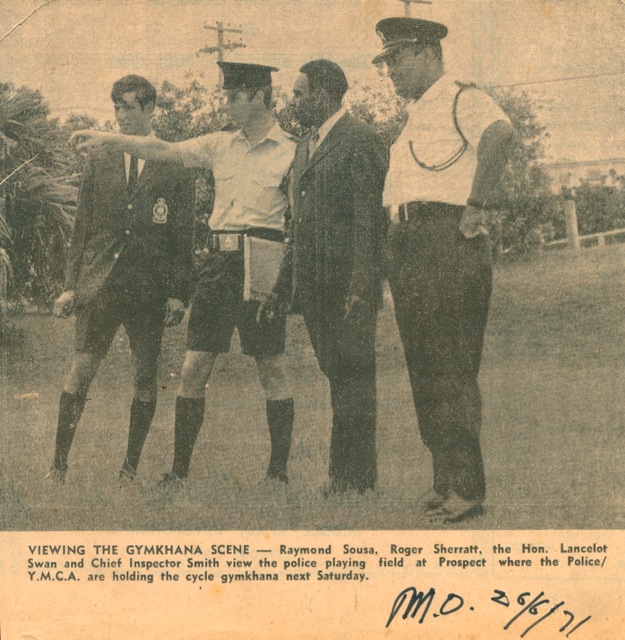 The annual Pedal Cycle Gymkhana moved to the Police Sports Field at Prospect after 1969, and remained a very popular event for many years.

Editors note: The annual Police Pedal Cycle Gymkhana was held for many years and continued to be successful, but was inexplicably dropped for about 18 years until 2010 when it was revived as the first event to be held during Police Week in October 2010.   The Cycle Gymkhana was again held at the start of Police Week 2011, and according to one of the original organizers, Roger Sherratt, who volunteered to assist, it was very successful and very well organized. Long may it continue.