As we travel through life we occasionally experience “events” that are so special they remain forever etched in our memories, and by all accounts the Bermuda reunion held in Sutton Coldfield, Birmingham, last September, was just such an unforgettable event for all of those who attended,  thanks to our good friend Bill Nixon, who did a brilliant job in organizing it from start to finish. 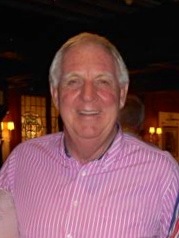 The reunion took place at The Ramada Inn, Sutton Coldfield, Birmingham on 20th and 21st September 2014, and those who turned up had chance to catch up with old friends and colleagues, many of whom they had not seen for 40 years or more.

I must sincerely apologize for not posting a full report on our website earlier than this, but I want to take this opportunity to thank Bill for putting on a superlative reunion.  However, as one who did not attend I am hoping that those who did will take the trouble to write to us and let us know how you enjoyed it.  We would also be delighted to receive more photos for our special album of the reunion. Go to our Photo Galley under the Main Menu on our front page and scroll down to view the photo album.

We can start with comments we have received from four of those in attendance:-

Dave Cook  -  Between 19 & 21st September 2014,  I had the pleasure of attending  a Bermuda Re-Union is Sutton Coldfield, Birmingham, organized by a former Bermuda police friend/rugby player Bill Nixon.

I arrived around lunchtime at the Ramada Inn on Penns Lane. After checking in I somehow found myself in the bar, and who was there but one of the guys who I went to Bermuda with in 1966, yes John 'Coco' Eve. It was great to see him, he certainly has not changed and remembers his days in Bermuda vividly. Also there was Helen Gallagher (Tommy's widow), she was enjoying being in the company of former friends & colleagues from Bermuda. A flower garland was placed around our necks along with a name tag in case we had a problem remembering who was who. Coco refused to wear his as he said nobody knew him as John Eve, only as Coco!! 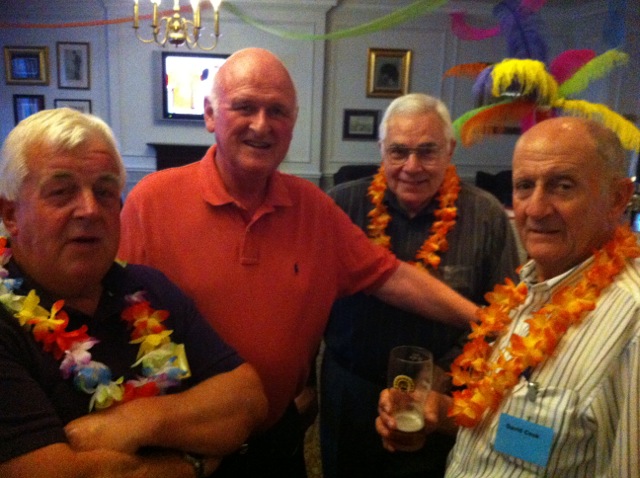 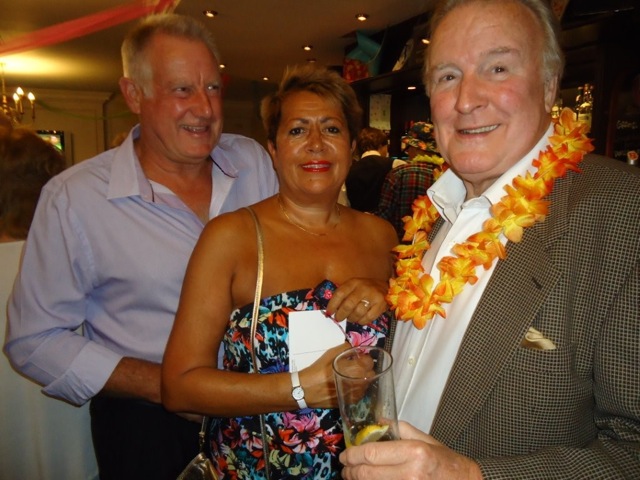 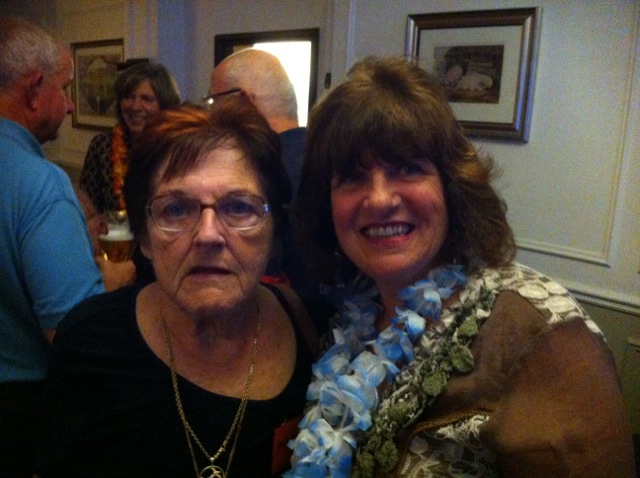 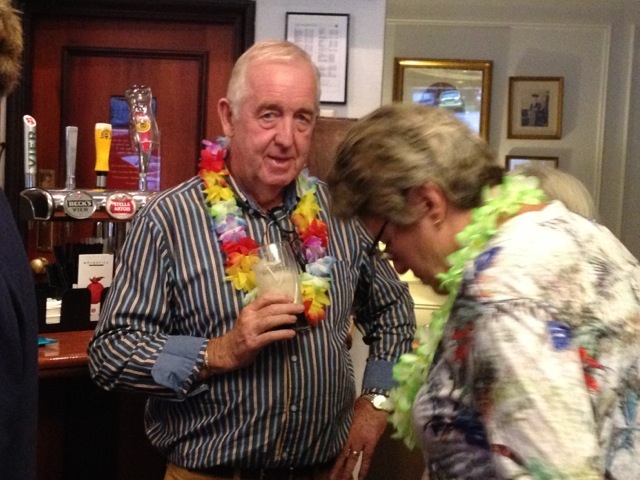 Dai Thomas and Marea
Friday night saw the arrival of quite a number of those attending, some of which included Paul Davis (who still has his sense of humor) and his wife. Later on Brian Malpas; Dai Thomas, Les & Heather Brown, Mike Jent, Angus Brown, Gerry & Shina Lyons.

On Saturday I accompanied Gerry & Shina, Coco & Angus on a fun-filled trip to the Bull Ring in Birmingham city centre, despite Gerry being conned into buying a tee shirt from a couple of slick Jamaican shopkeepers. 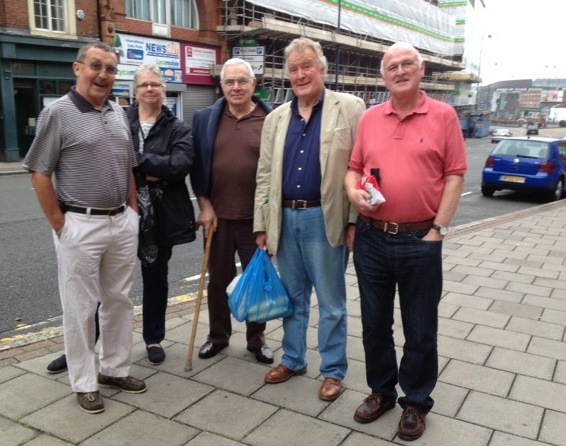 Dinner on Saturday night was a wonderful evening which was enjoyed by all. I have written to Bill Nixon congratulating him for his hard work in organizing a very enjoyable and successful weekend. It's the first overseas reunion I have attended, and it certainly won't be the last. Like Ian Graham said, he saw people he had not seen for 40 years. It’s just so enjoyable meeting and catching up, problem is there is not enough time to do all that.

I look forward to the next get together sometime in the future.

Most of us had our respective partners with us. Many of the wives hadn't met before, but everyone agreed that it was an absolute cracker of a weekend! 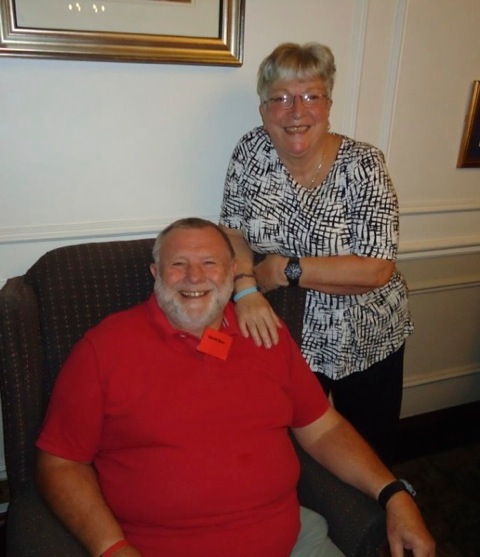 My Jean said  she thoroughly enjoyed herself and it was great just how everyone mixed in together, and I remember Paul Davis' wife Carol saying basically the same thing. We hadn't even got in the door before someone looked out of the bar and saw us, and roared out "Hi Davie Kerr!"

Quite a few of us arrived on the Friday and spent two nights there, and on the Friday evening eight of us (Ian & Maggie Graham, Paul & Carol Davis, Angus Brown, Sue Wale [Maggie G's former shift partner], and Jean & me) went out to dinner at a wee Italian restaurant which Sue (who lives locally) knows well and I think patronises quite often, and it was fabulous! 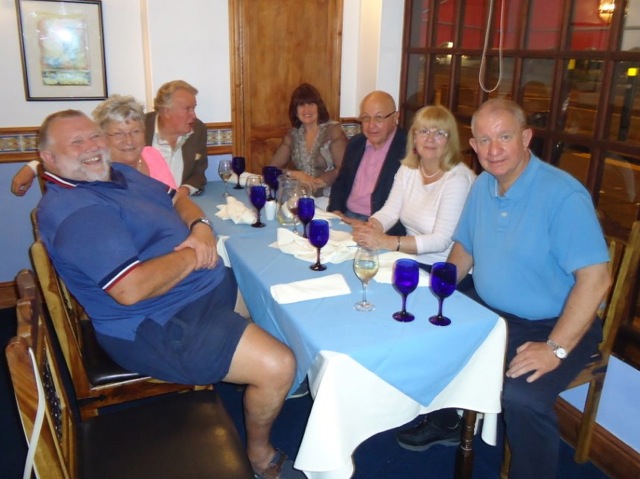 Angus (who you may recall could always tell a good story) was on top form, and the rest of us were always able to chip in any time he stopped for a drink or a breath, which I think was in roughly equal proportions! Just for good measure it happened to be my birthday that day, and the staff came through with my dessert and a candle on top, singing "Happy Birthday"!

Ian Graham  - Just back from the Bermuda Reunion at Sutton Coldfield which was great. Met up with some folk I had not seen for over 40 years. 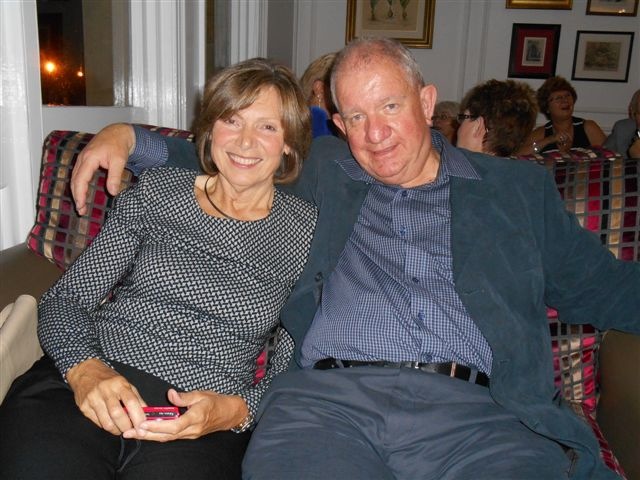 I am sure you will get lots of reports but suffice to say it was a great success. I attach a few photos which are not of the best quality but will give you a flavour of the two nights. 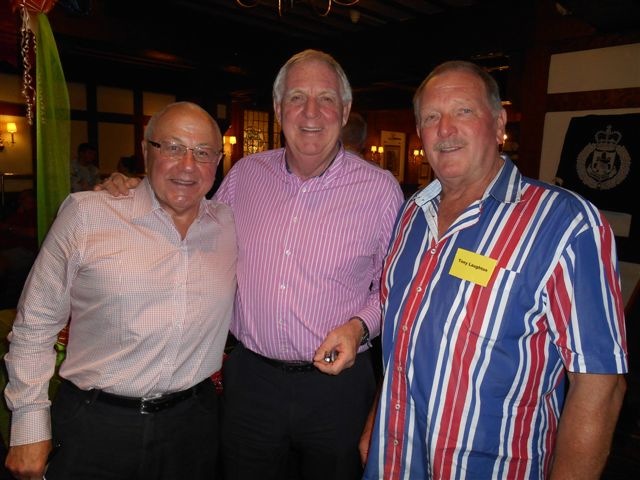 Tony Laughton - I cannot speak too highly of Bill's organising efforts - nothing left to chance, a real 'belt and braces' job!  The atmosphere of the event was wonderful,  I for one was reminded by others, of many 'escapades' that I had (maybe conveniently) forgotten!  Once again, many thanks to all. 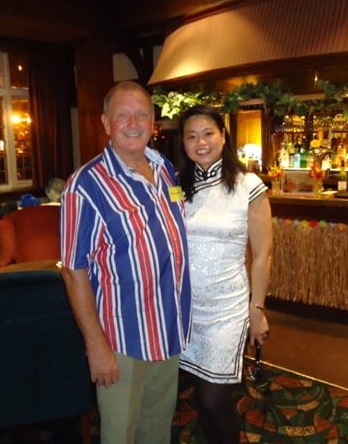 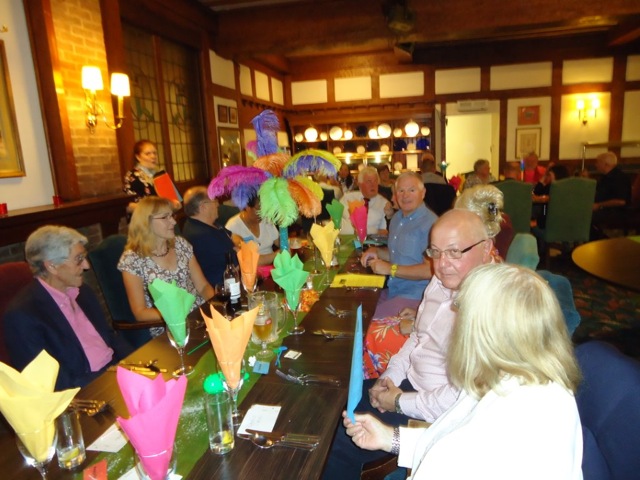 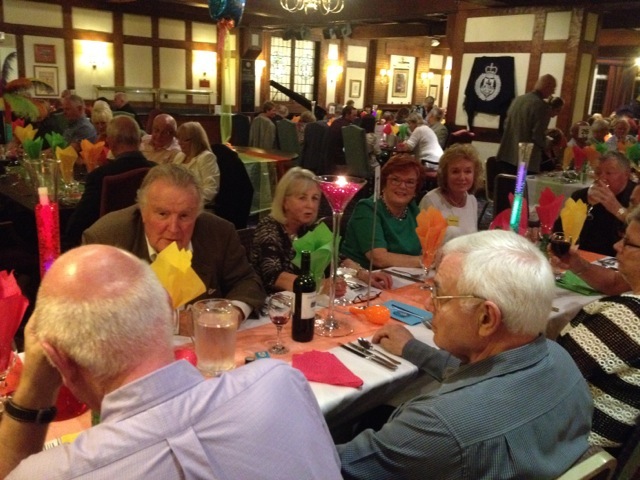 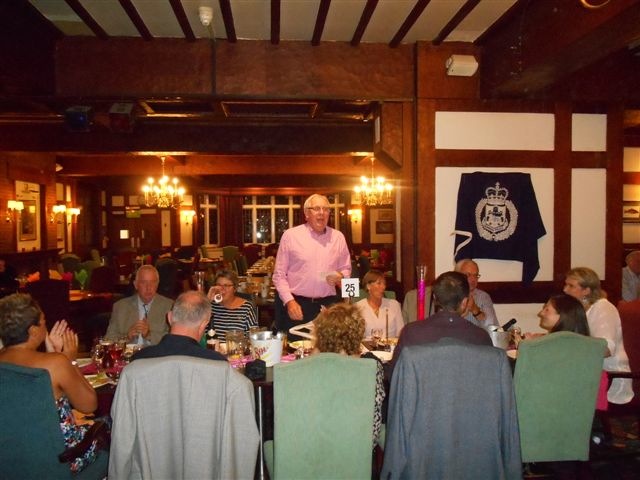 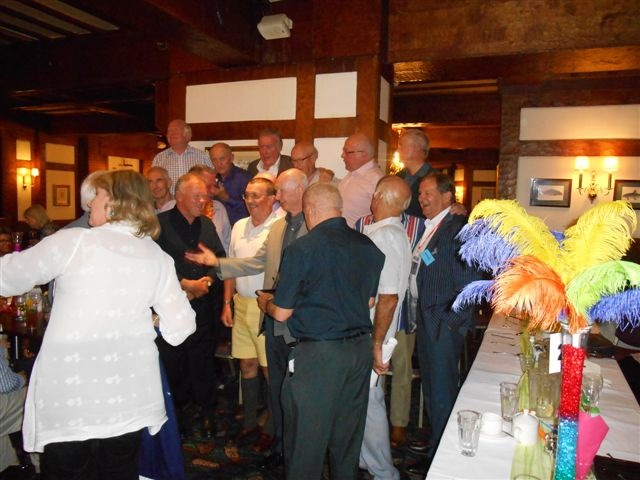 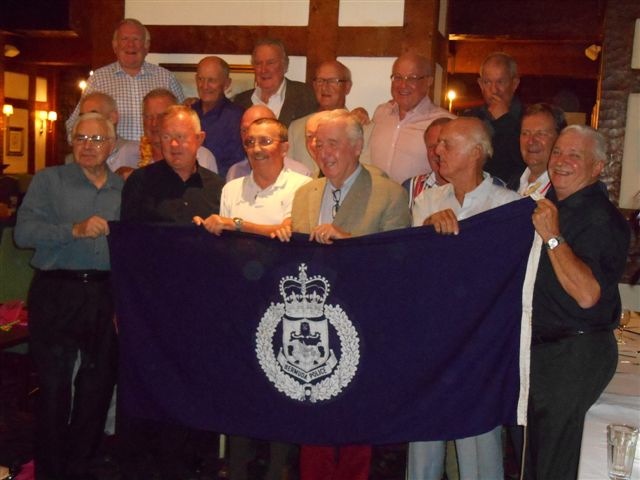 A very disorganized group photo!
We are hoping that someone has the "official"
group photo where we can see everyone.
EDITORS NOTE -  We would be delighted to receive any extra photos and also any first-hand accounts of the reunion from anyone and everyone who was present for this event.  Photos should be sent to This email address is being protected from spambots. You need JavaScript enabled to view it. and should be in JPEG format.  You can send your comments either to this same address or add them in the Comments column at the bottom of the article.  Please note that if you type comments below the article they will not appear immediately because we have to vet comments prior to posting.
28th January 2015
The following was received from Keith and Dot Midgeley who also attended the Reunion:-
We were delighted and privileged to attend the Bermuda Reunion in Birmingham. We were on holiday when Sam Lewis had posted it on my face book page.On returning back in England phoned the Ramada Inn and booked for the weekend then I told Keith what I had done.
Wow!! what a weekend- we chatted to old friends and workmates - some we hadn't seen since leaving Bermuda in 1981, Lyn and Ann my old shift partners at K.E.M.H., Steve and Pat McHale as our children attended Boaz Island Nursery; also meeting  new friends especially Dave Kerr as we are face book friends but was good to talk face to face.
We still have our garlands and name tags as keepsakes.
Special thanks to Bill Nixon for a fabulous weekend.
Dot Midgeley

John McQuaid 7 years 5 months
I booked to go but ended up spending the weekend in bed at home with an infection of some sort. Lost my deposit and didn't get to the gig. Looking at the notes and seeing the photos, it looked as if a good time was had by all, but I have to confess that I only knew about 6 of those shown and would have been amongst a group of strangers.Editors note - From what I heard you would have had your money's worth just listening to Brian Malpas tell his tales! Hope you're over your infection.