We pointed out that all of the persons in the photo below, with the possible exception of the lady in the group, had served in the Bermuda Police.  But we wanted to know who is in the photograph, where was it taken, and what was the purpose of this get together?

We’ve had a number of responses from our former colleagues, including Bill Smith, Connell McBurnie and Tim Burch, all of whom are in the photograph, as well as several other former BPS officers, and we have to say that the three men who appeared in the photo barely passed our “memory test”. They scored just over 60%. It was Pat McBride who finally provided all the names and we were admiring his prodigious memory when he sent us the source of his information - an article that accompanied the photograph in an old copy of the Police Magazine dated - Winter 1972. Full marks to Pat.

The photograph was actually taken during a reunion of ex-Bermuda police officers held at the Holiday Inn in Etobicoke near Toronto in 1970. 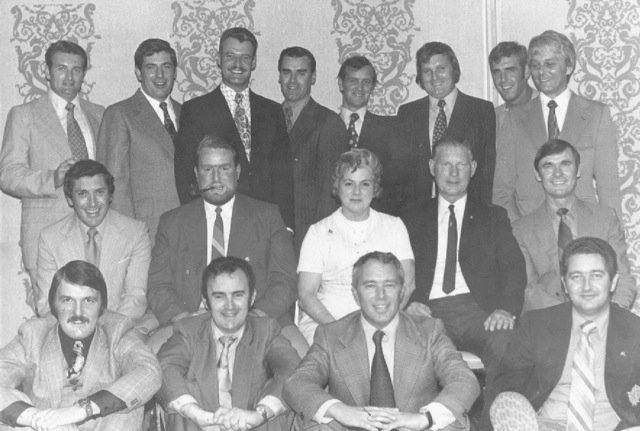 On the evening of the 21st September 1972, a group of ex-Bermuda police officers held a reunion in Toronto, Ontario when former Deputy Commissioner F. B. (Frank) Williams, QPM, visited that city.

Mr. Williams and his charming wife, Joan, were in Toronto for the day, en route for a Canadian holiday in British Columbia. They were entertained at a very informal get-together at a Holiday Inn and it was good to see this popular gentleman again. His many friends and colleagues will be glad to know that he continues to make steady progress from his accident.

As one might expect at such a gathering, there was the usual uncensored versions of old stories, all somewhat exaggerated with the passage of time. Old ‘campaigns’ were refought over “The Sands of Elbow Beach” and a number of the former “Heyl’s Corner Cowboys” could be seen brushing imaginary sand from their now thinning hair! Of course, this was before the “Bird Cage”, when the khaki-clad warriors performed their hourly ritual with only an umbrella for protection against the sun and tourists.

One “Traffic Veteran” astounded all by still being able to recall the licence numbers of certain female-driven cars; the cars he could remember – the women no! That’s a Traffic man for you!

Bill Smith, Connell McBurnie and Tim Burch were heard recounting episodes from their old Cycle Squad days, the latter two in particular recalled some infamous I.D. Parade in which they almost took part. These days Bill is with Ford of Canada, ‘Mac’ is with the Ontario Provincial Police and Tim is an insurance adjuster.

Malcolm Santer was the only non-policeman there but it is doubtful whether anyone realized it; Malcolm had played enough games for the Bermuda Police Rugby XV and purchased his share of “Heineken’s” in the P.R.C. to qualify for membership in any Association connected with Bermuda Policemen.  (Editor's note  -  although this article stated that Malcolm was a member of the Bermuda Police Rugby XV, Dave Garland has pointed out that Malcolm actually played for Renegades against the  Police.  However,  he no doubt consumed more than his fair share of Heineken's at the PRC!)

Peter Jackson, now a Doctor with a practice in Hamilton, Ontario, was seen having a most serious discussion with Malcolm. It was presumed to be a professional discourse until some wag said it concerned the merits of Canadian nurses - non professional! Both have been considered experts in their time.

Bob Curnow is with the Ontario Government Community Services organization and entertained all with some impressions on the telephone - (sorry – private joke!)

Tom O’Sullivan, another insurance adjuster, did a “Forder” and organized the sandwiches; they were both inadequate and unpalatable – just like the old PRC days. Tom promised to go heavier with the fish paste and jam next time.

John Millington has his own business in the Hamilton area, and Duncan Gourlay, who recently returned from a short-term residence in the U.K., now works with John.

Dave Needham and Ian Mitchell brought more recent Bermudian anecdotes to the proceedings. It was a sense of relief to discover that some things never change -- faces might, but the antics and characters remain.

It was left to Ken Norman to provide the highlight of the evening. When preparations began for the group photograph, Ken, a former “Promotion Stakes Pleaser”, was overheard to say to yours truly, in a conspiratorial whisper, “I think we should have all the Sergeants sitting together in the front row, don’t you?” Howls of derision followed, and Ken Thompson was seen having a real heart to heart chat with the “old Sarge”! Ken is yet another insurance adjuster - no wonder the rates are so high, and Ken Thompson is making a very lucrative living flogging TV’s and stereos.

Have I mentioned everyone? I hope so. I’m doing my “thing” with the Ontario Provincial Police, or the O.P.P. as they are more commonly known - Ontario’s Poorest Paid, or Ontario’s Passionate Playboys - depending on one’s point of view.

Such was the success of this gathering that plans are already underway for a more ambitious venture early in the New Year, this one to include the ladies. No doubt their presence may tone down the stories somewhat, but the Canadian Nurses Association and affiliated bodies should have a field day comparing notes.

Is there a purpose, other than social intercourse, in maintaining old ties with reunions and the like? I think so. The old “esprit de corps”, or the animating spirit of the Force fosters more than an album of photographic memories or the occasionally exchanged Christmas card. Many firm friendships were forged in Bermuda and experiences shared. It is a measure of the pride in the Force, as well as the affection and standing in which Mr. Williams is held, that such a large number of old comrades turned out at such short notice to pay tribute to him.

Editors note -   Sadly, several of our old colleagues in the photograph are no longer with us. Peter Rose, who was also an ex-Royal Marine, died about 20 years ago. Ian Mitchell and Tom O’Sullivan both died several years ago, and we’re sure that Frank Williams is also no longer with us.

We are in touch with Bill Smith, Tim Burch and Connell McBurnie, and would like to hear about any of the other guys who gathered at the Holiday Inn in 1972 for this reunion. 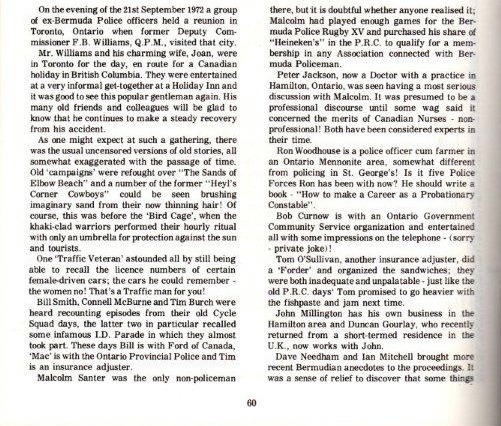 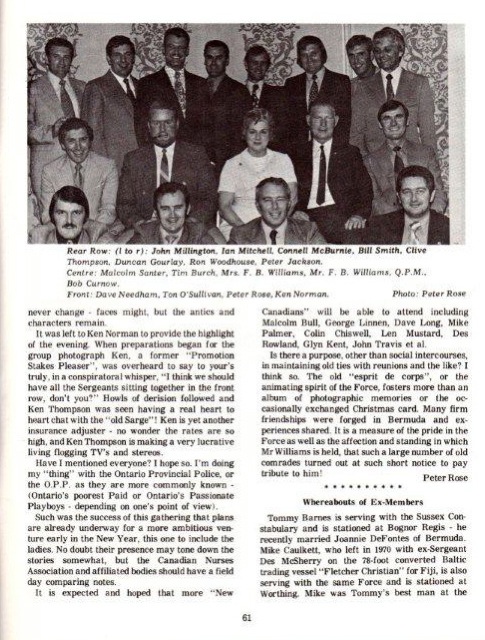