Empty
We have received the following report on the terrible fires in Australia from our good friend Ray Sousa who settled in Western Australia after serving in the Bermuda Police in the 1960's and 70's.  Although now retired, Ray worked for many years as a  Local Government Ranger.  His duties included everything from parking control, litter control,  security, animal control, bush fire control and in particular fire prevention, working with emergency services during major incidents; plus a wide variety of other duties.
In  the mid 70s,  Ray became a volunteer Bush Fire Fighter, serving in all ranks up to Chief Bush Fire Control Officer.  He also did specialist training covering all emergencies with Emergency Management Australia. 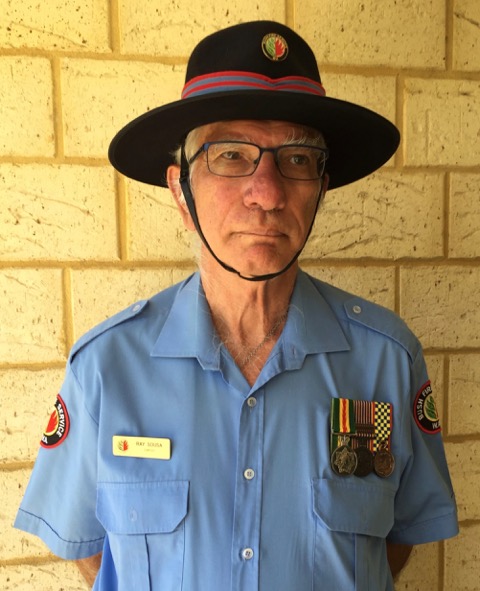 Ray in his Summer Ceremony Dress Uniform
wearing his medals 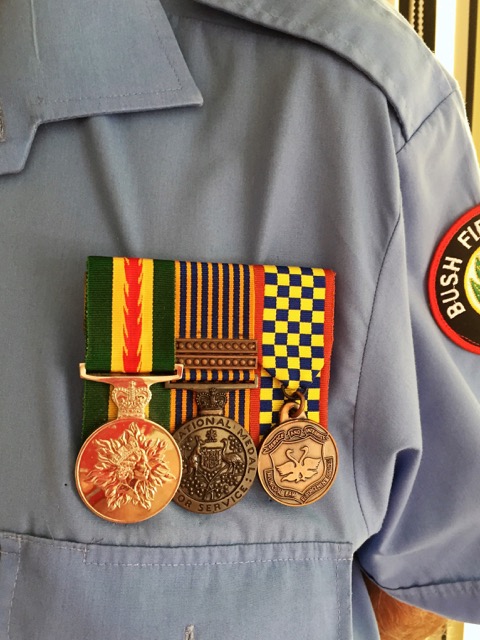 Ray's medals (l-r)
Western Australia Local Government Rangers Medal - Long service
Australian National Medal  -awarded to Military and Emergency Services,
and other agencies such as Surf Life Savers, that risktheir lives to protect
the community, issued after 15 years service, with a bar for every addtional 10 years
Australian Fire Service Medal - This has replaced the Queen's Fire Service Medal
Before retirement he was Chief Bush Fire Control Office [ for Town of Kwinana ] / Emergency Services Co-ordinator a joint Local Government, State Government position.  Ray's son Chris holds the same position for the Town of Bridgetown.  In a rare father/son  double Ray and Chris have both, in different years,  been awarded the Australian Fire Service Medal [AFSM].  Out of nearly 30,000 volunteer [ Local Government] Bush Fire Fighters, only five AFSMs are awarded each year. 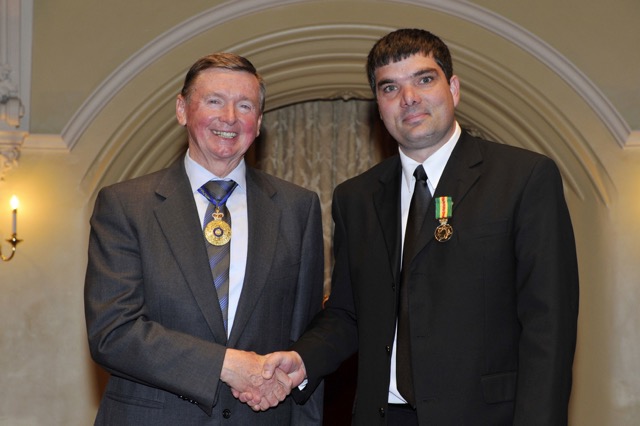 Chris Sousa receiving his AFSM from the Governor in 2012
At 35 years of age, Chris was one of the youngest people to receive this award. He has followed
in his father's footsteps, devoting his life to working in emergency services.  This is all the more amazing
because Chris had spinal meningitis when he was just 9 weeks old, and doctors did not expect him to survive. 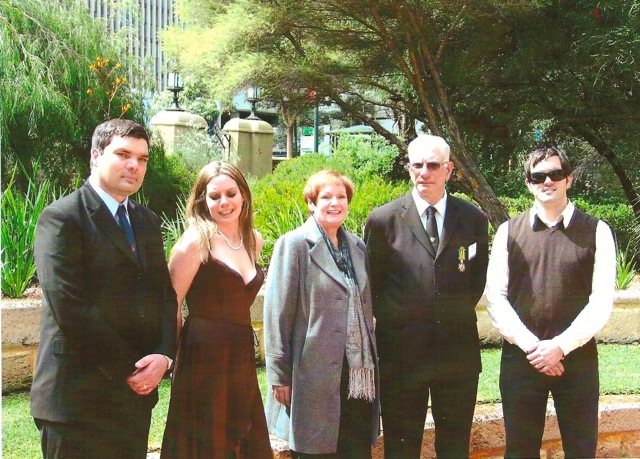 Family Photo at Government House - 2008 when Ray received his AFSM
Pat and Ray, with their children (l-r) Chris, Rebel and Andrew
(Daughter Amanda was in Bermuda at the time)
As you will see from this report, Ray may be retired but he has never been one to stand still!

Just a quick update on our situation in the West.  We started the year off with Jessie Belle getting sick with gastro and spending time in the vet hospital.  For a free dog, she is proving to be expensive.

As well as local fires, I have been working 10 – 12 hour shifts at the large Waroona Fire.  The perimeter is about 381 KM [about 228 miles].  This compares with Northcliffe 300 KM and Boddington 140 KM Fires last year.  For those who know WA, the fire was from Waroona south to Harvey, back to the coast, where people were evacuated by boats. As you might know there are a number of towns within that area.  162 homes and 18 other major buildings were lost, plus one fire unit, 3 bridges, a lot of livestock, equipment, fencing, shed etc were lost and damaged.

Editors note  -  BBC World Service have been covering this fire and filed a report which can be viewed at   http://www.bbc.co.uk/news/world-australia-35258692

Most of the losses were in the historic town of Yarloop, where two men in their 70s lost their lives. I am sure there will be a lot of debate about what could have been done to save the town, and its future.  As a person who has faced a wall of flame up to 30 metres [100 feet] high, a mile wide, fire balls going over the top of you, smoke and  hot embers falling around you  [these were the conditions ], I question if anything else could have been done. At the end everyone including fire fighters fell back to the main oval until the danger passed.  Even being on the oval would have been scary for a lot of people.  It is a miracle that no-one else was killed, although a fire fighter died at another fire.  Due to the old buildings being constructed with asbestos, the town has been declared a contaminated site.  No-one, even those whose homes were not damaged, are allowed in.  The question is now should the town be re-built? If so what will be the cost and who will pay? The cleanup bill alone will be huge.  Andrew Forrest, the multi-millionaire who owns Harvey Beef to the south of the town has offered to help.  Government have to make a big call one way or the other on this matter.

I worked [as a volunteer] at the main Waroona Oval Command Centre, just over an hour from home.  Basically, the sporting complex was turned into a town with offices in portable buildings, and command/communications vehicles, tents etc.  There was a First Aid Centre with a number of ambulances. The Police had a centre.  There was a helicopter landing and re-fuelling area, vehicle re-fuelling and staging area.  Of course there were food and mess areas to cater for the staff, and to get meals to staging areas in the field, and evacuation centres.

It might be argued that we were safe from the fire, but there were times we were showered with burning embers and working in thick smoke.  At times those of us outdoors were in temperatures over 40 c degrees [105F degrees]. Some people collapsed due to the heat.  It was a lot hotter at the fire front. My closest call was a day a thunder storm moved in.  We had to warn the people at the fire front of the fast moving storm with lightning.  Once done, I lowered the main tall hydraulic radio mast, with lightning all around me.  A direct hit would have seen me roasted. Of course the lightning started new fires and request for air support, which we were unable to give due to the danger to air craft.

For the most part we are now in the recovery stage and seeing Australians and humans as a whole at their best, with help of every kind been given, clothes, money, temporary accommodation, convoys of donated stock feed for farmers whose paddocks were burned etc.

The term ‘hero’ is used far too often, but I believe everyone involved in this incident are true heroes. There were people who lost their homes, but still tried to save their neighbours homes. People who collapsed with exhaustion, and got burns who tried to get immediately back into the fight.  I consider myself to be honoured to have been able to work with these heroes.

January 2016, officially marks 50 years since I joined the Bermuda Police Force, and continually worked with Emergency Services [Local Government, Army Reserve, Bush Fire Services].  To all those who have given encouragement and support over the years, I sincerely thank you.

Stay safe, all the best for the future.

Editors note  -  Ray also made a suggestion that we create an album of Training School photographs for the website. This is an excellent suggestion and the column will be launched before the end of this month which is fitting because it was, as Ray mentioned, 50 years since he joined the Force, and 50 years since he attended Basic Training Course No. 7.  We will post the Training School photos individually so readers can add comments to each photo.