Here's a parade of knees in Summer uniform and we wanted to know who are the members of this Watch, who is the Watch Sergeant, and where and when was it taken?

This has proved to be one of our most difficult photos to confirm identities.  We know for sure that the Sgt parading his men is Jeff Sanders. Jeff had joined the Bermuda Police 1960 and worked in Eastern, HQ, Operations, Central CID, Eastern CID and CRO prior to being transferred to Central Division in June 1970 and was there until August 1971 as a Sergeant.

Terry Cabral says that it looks like David Furbert 3rd from right, and possibly Foster Burke 4th from right.  We believe Terry is right on both counts.  According to John Skinner's 100 year list David Furbert joined in Oct 1969 and left in April 1971, while Foster Burke joined in January 1969, which would mean that the photo must have been taken  between June 1970 and April 1971.

Winston Battersbee recognises the location as the alley between the old Hamilton Police Station (located where the Government Administration building is now located) and the Post Office.

As for the rest of the Watch, Terry says it could be Harry Parry 5th from right, and there are suggestions that the two guys at the far end could be Laurie Phillips and Barry Walkes.  We await confirmation - or denial! 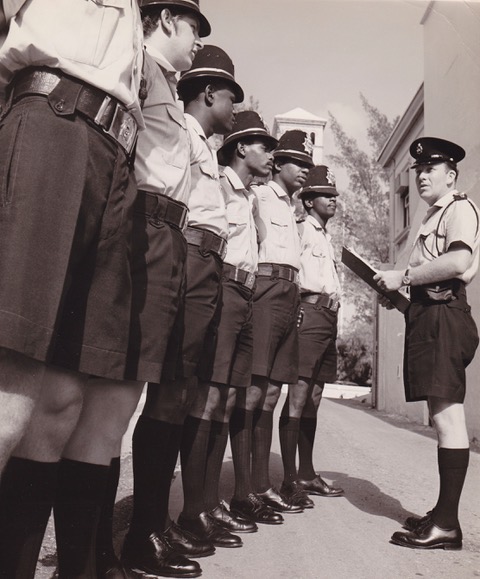 Sgt. Jeff Sanders parades his Watch in the alley next between the old
Hamilton Police Station and the General Post Office
Confirmed ID's are David Furbert (3rd from right)
and Foster Burke (4th from right).
Can you confirm the other Watch members?