Our latest photo was taken at a social gathering where everyone present looks very smart, but we wanted to know what was the occasion, where and when was it held, and who was present?

We received the answers (see below) from Davie Kerr which was no surprise! Davie confirms it is a photo of the group of officers who joined the Bermuda Police in 1966, along with their wives,  and it was taken at a function Davie is almost certain took place at Elbow Beach Hotel in 1986, 20 years after their arrival on Island.

It is of special significance this year, 2016, because a similar banquet is going to be held later in the year for all the officers who joined the Police Force  50 years ago.  There are far more than the officers shown here and we hope to see as many as possible attend the reunion here in Bermuda. We will publish full details as soon as plans are finalised. 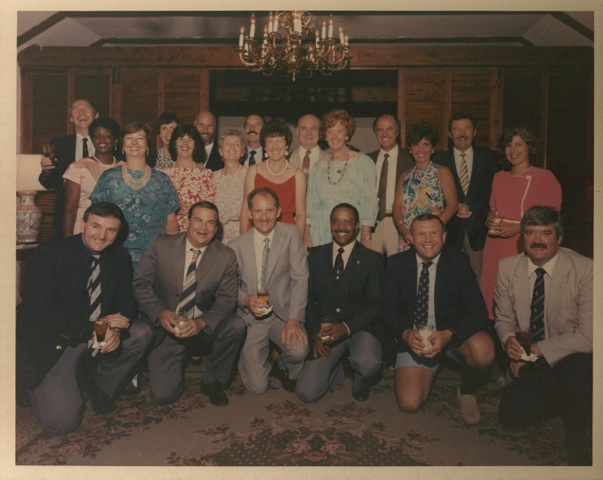 Davie Kerr 5 years 5 months
Would absolutely LOVE to be present, but sadly have to decline as there's simply no way we can afford to stay out there from before 10 Sep to after 14 Nov, and medical problems come into the equation as well. Presently I very much doubt we'll manage anything more than a 3-week package deal at somewhere like Grotty Bay.Editors note - Sorry you won't be able to make it for the reunion. Hope your surgery goes well. Let me have your dates and I'll put out another reminder re housesitting.

Davie Kerr 5 years 6 months
Roger, any update on the above-mentioned 50th anniversary dinner? If you can give me a date, it may influence our proposed visiting dates!Editors note - Hot off the press Davie. The date is Saturday 10th September. Hope you and Jean can make it.

Terry 5 years 8 months
Can't add much to the comments except that the 50 years will take place later this year.Best to all.

Davie Kerr 5 years 9 months
Editors note - Davie very kindly held off on providing all the names in this photo until someone else had a go! He just sent us the following information, and I see from the comment just made by Stanley Hill all the way out in Australia, that both had all the names correctly, and Stanley remembers that the 'do' was held at Pompano in Southampton which is still there and I'm told is an excellent restaurant for lunch and dinner with a glorious panoramic view.Davie says:-"I can reveal that this was the 20th anniversary gathering of those of us who joined the Police in 1966, and I think that it was at Elbow Beach, although I'm open to correction there. Standing from L:- Gerry Ardis, Clara Saunders, Hilary Hill, Di Smith, Bea Brookes, Malky Smith, Millie Ardis, Denis Brookes, Patsy Cook, Roy Chandler (who was OiC Training School in '66), Mrs Chandler (Dee, I think), John Graham, Debbie Graham, Dave Ashurst, Liz Ashurst.Front from L:- Pat McBride, Stan Hill, Dave Cook, Reese Bartley, Davie Kerr, Vic Richmond.Barrie Mancell and George Rushe should also have been in that pic as they came out with Gerry, Malky, the late lamented "Bones" Fraser, and me, but I think they must have been away on leave.And, yes, this year marks our 50th anniversary!"

Terry 5 years 9 months
Guess I will hold off also.

Davie Kerr 5 years 9 months
I'll hold off a bit, because I know about this pic and its background as I'm in it!Editors note - Thanks Davie. When you do write I trust you will know the significance of the photo this year!