We knew exactly where and when and why this photograph was taken but we wondered if you can name all these men, and tell is what they all have in common in addition to serving or having served in the Bermuda Police?  It could also be argued that three of these men could be considered the "odd man" out of the group for three different reasons. Any ideas?

Where and when was easy because it was, of course taken on Saturday 30th January at our annual ExPo Reception which was very well attended and a great success.  What they all had in common is that they all served in Marine Section at one time or another.  Perhaps the odd ones out could be Commissioner Michael DeSilva was is the only member still in the Service;  Canny Roberts who is the only member of the Reserves and has only just retired as Commandant;  and the thrid one is Brian Malpas who can rightly claim to have worked as a Marine police officer even bfoire we had police boat and an official Marine Section.

Davie Kerr had no problem identifying everyone in the photo as per the caption below.  Many thanks Davie. 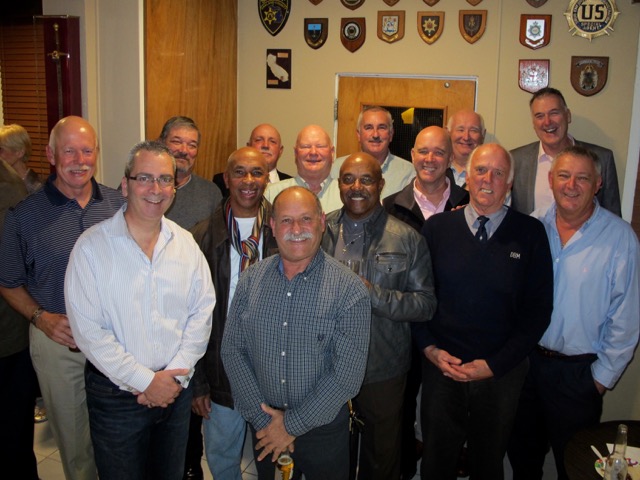 Davie Kerr 5 years 11 months
On the subject of tall people, there was a rumour going around 30-odd years ago that we had recruited (among others) one particular bloke who was actually an England prospect at rugby, but either turned us down or we turned him down because we didn't have barracks beds long enough for him! I don't know just how much truth there was in that rumour, but the name mentioned was that of Martin Bayfield, who is 6'10" and went on to play second row for England in the late '80s/early '90s. Does anyone else have any recollections of that rumour?Editors note - It does seem to ring a bell Davie. Anyone else out there recollect this? Regarding the height of Barry Meyers I seem to recollect he was about 6'8" but will check his record when I next visit Police HQ as well as that of Pete Shaw.

Davie Kerr 5 years 11 months
Don't recall Barry Meyers ever playing cricket: rugby, yes, but not cricket (although he may well have done).I think the tallest person in the job when I joined was Long John Sharp, then Pete Shaw held the title for decades until Scott Devine came on the scene.At 5'10" (the minimum height for Dundee in those days) I was one of Dundee's pygmies, and I though that I'd be one of the taller ones in Bermuda with their then minimum of 5'8": I joined with 5 other lads, two at 6', one at 6'2" and two at 6'4", and I was still the pygmy! In fact, I think the height limit was only reduced to accommodate Frankie Foggo and Eric Ingemann when they came up from the Cadets, but I stand to be corrected.....

Davie Kerr 5 years 11 months
Incidentally, I'm pretty sure Cannoth "Kenny" Roberts is the son of the late Sgt of the same name, who was my first Station Sgt when I went down town in Dec '66 after my Localisation Course. My Watch Sgt was the late Gerry Harvey, and as I recall the rest of the watch was "Shakey" Johnson, Barry Meyers, Tommy Barnes, Ralph Sealy, Pat McBride, Ian "Abey" Mitchell, Dave "Big Joe" Needham and Brian Kent. Gerry was reputed to have said something like "My watch isn't maybe the most educated watch in town, but it's the one I want with me if there's any trouble!"Editors note - Spot on Davie re Canny Roberts beinlig the late Kenny Roberts son. I served under Kenny when he as a Sergeant in Traffic. He was a great guy and apleasure to work with.I would have said that Barry Meyers, who played cricket while here was the tallest guy we have ever had in the Polic until now! Who has probably taken over that mantle?!

Davie Kerr 5 years 11 months
Sorry for my error, but I don't get all the local news 4000 miles away!

Davie Kerr 5 years 11 months
I have to think that, at one time or another, they all served in Marine Section, chiefly because I know most of them did.I think the bloke at the front in the check shirt is Kenny Roberts, now the Reserve Commandant. As for the rest, from L:-Mike Shaw, CoP Mike DeSilva, Brian Robinson, Jerome Simons, Ralph Lindo, Phil Taylor, Reese Bartley, Ian McMillan, Mark Botelho, John Skinner, Brian Malpas, Keith Senior, Paul Cranage.Editors note - Well done Davie. Yes, they all served in Marine Section at some point in their careers although it could be argued that Brian Malpas is the odd one out because he operated a boat for the Police before the Marine Section was formed. One minor correction Kenny Roberts was until recently the Reserve Commandant but he is now retired.