We thought this would be a most appropriate photo to post in this column bearing in mind the new Photo album we have just created of Basic Training Courses held at our Prospect Police Training School.  We needed to know who they are,  where and when it was taken, and what brought them together.

There was no problem correctly identifying everyone in the photo as listed in the caption. Davie Kerr had no hesitation in doing so.  It was also obvious that it was taken at the Police Training School when the rather diverse group on the back row were on a course of some kind.  Bernie Pitman came to the rescue in that regard because he remembered attending this Instructional Techniques Course, probably one of the first of its kind held here.   We believe that Tinker Taylor and Paul Eurell attended as new driving instructors,  Bernie was in charge of Outward Bound and the Road Safety Bus,  Lionel and Orson were in Sepcial Branch at that time, and George - well we know that he attended a couple of courses on Explosive Ordinances, and maybe he took the course so he could teach others on the subject!   Those on the front row were, of course, all Training School  instructors.

I happened to find this photo a few months ago in a box at Police Headquarters, and a caption on the reverse side stated that it was taken at the Police Training School, Prospect, in February 1981.  Davie Kerr was not convinced of the year because he thought that George Rushe had already been promoted to Sergeant prior to 1981.  However,  I checked George's file in the Police Register at Prospect which provides basic information such as dates of joining, transfers, promotions etc. and it recorded the date of his promotion as 1st April 1981 - 2 months after this photo was taken.   George often told the story of being called to Nobby Clark's office on 1st April (George referred to it as "All Fool's Day"), which also happened to be Nobby's last day of service,  and being told that he was being promoted with immediate effect.   On further checking the records,  Commissioner L.M. "Nobby" Clark officially retired in October 1981 and he would no doubt have been entitled to about 6 months pre-retirement leave, so I believe the date on the photo caption is correct. 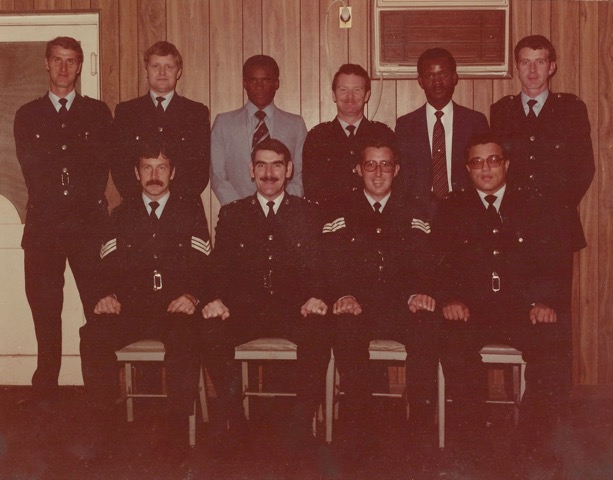 Davie Kerr 5 years 10 months
Yes, I strongly suspect that it was a bit of a backhanded smack in the face to a certain individual.....Did someone say Rubber-Soled Shoes?

Davie Kerr 5 years 10 months
OK, I'm happy to take your word for it being '81.Now I come to think of it, George and (I think) Stan Francis were both made Sgt on the same day, and it was just before Nobby retired as opposed to just after the Story of the Saga of the Rubber-Soled Shoes, so that would make it right.....Editors note - Many thanks Davie. George used to say that promoting him was the very last action taken by Nobby on his last day in the office!

Davie Kerr 5 years 11 months
I have to think that date's wrong. I very much doubt if George would have been at that course dressed as a PC when he'd been promoted almost two years earlier! I could agree with Feb, but not Feb '81: more likely Feb '78 or '79.....Editors note - I have to question your accuracy on this one Davie. George's file in the Police Register shows he was promoted on 1st April 1981 - 2 months after the date on the photo. George often joked about the fact that he was promoted on "All Fools Day" by Nobby Clark on his last day in the office (a "legacy issue"), and Nobby's official retirement date is 21st Oct 1981 (probably had 6 months retirement leave.)George attended an IT course at the Canadian Police College in 1985, and two Explosive Ordinance Refresher Courses in 1980 and 1982. I shivered slightly at the thought of George handling high explosive - even after two refresher courses! There is no mention of this local IT course in his file.

Davie Kerr 5 years 11 months
I'd guess '78, as George made Sgt in '79.Editors note - This is a photograph I obtained from Police HQ a few months ago along with several others, and a caption on the back lists everyone in it (no mention of their rank) and says simply "POLICE TRAINING SCHOOL, PROSPECT. FEBRUARY 1981." As stated earlier by Bernie Pitman, it was taken during an Instructional Technique's Course. Not sure how many of these IT courses were held but I attended one of them along with, notably, Mike Jent,and several others and it was one of the best courses ever! I had to give a lecture why young recruits should wear condoms to avoid sexually transmitteed diseases. Part of the lecture included a "practical" so I had to ask each student to unwrap a condom and unroll it on their thumbs. Mike had a major problem with this task as he couldn't stand the smell of condoms! It took great powers of persuasion to get him to complete the task, and I seem to remember getting very high marks for that particular lecture!!

Phil Taylor 5 years 11 months
Back row: Anthony "Tinker" Taylor, Paul Eurell, Lionell Haynes, Bermie Pitman, Orson Daisley and George Rushe. Front row: Alan Barker, Barry Meade, A.J. Smith and Norman "Gus" Ingemann. The location is at the rear of the main classroom in the 'old' Training School and according to my good friend, Paul Eurell, it was a photo of attendees of an IT Course!Editors note - absolutely correct. Bernie Pitman also confirms that this was an Instructional Teachniques course. Date or year?

Davie Kerr 5 years 11 months
Back from L:- Anthony "Tinker" Taylor, Paul Eurell, Lionel Haynes, Bernie Pitman, Orson Daisley and George Rushe.Front from L:- Alan Barker, Barrie Meade, AJ "Tony" Smith and Norman Ingemann.At a guess, a Senior Constables' Course of some sort.Date, late '70's, but before April '79 when George made Sgt.Editors note. - Almost spot on Davie. You got all the names correctly, and yes, it was taken during a course at Training School but it was not a refresher course. I checked with Bernie Pitman and it was a type of course I also attended and had a great time! Any more ideas of the subject matter?