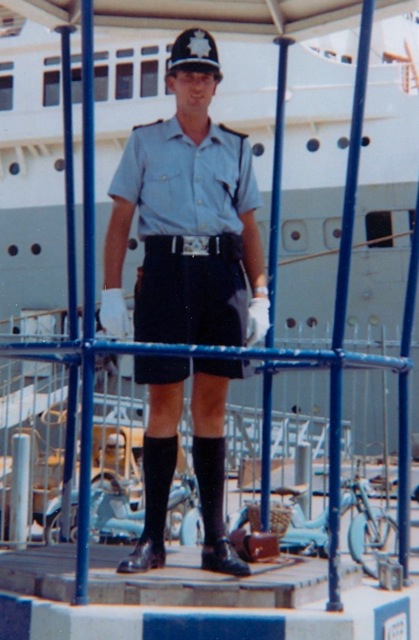 P.C. Terry Heathcote on duty at the birdcage

Although my stay in Bermuda was fairly short it was not without its moments, but more about that shortly.

After three and a half years in the Staffordshire Police, I arrived in Bermuda in May 1964 to be met by Inspector Douglas (“Red”) Hebberd who deposited me in Henderson Block at Prospect. My room was between those occupied by Arthur Rose and Roger Sherratt who I quickly realized were ideal neighbours as there was hardly any noise from them, and no sleepless nights due to excessive festivities.

It soon became apparent that I needed transport, and Andy Bermingham gave me lifts into Town until I bought my own Mobylette. An initial Course was already in training under the supervision of Chief Inspector Roy Chandler but because I had recent police service I only did a week there whilst I was kitted out and then posted to Central Division (Hamilton).

My Sergeant was Hilton Barclay Wingood - who I thought was a real gentleman - and still do as I’ve had the pleasure of meeting him again in his retirement when I visited on vacation (you see I still remember the language).

Many ex officers of my day will recall our almost daily visits to the Chinese Restaurant on Reid Street (Editors note - the building no longer exists and has been replaced by the Washington Mall) where we were unusually encouraged to pay monthly because we got a discount at the end of the month. John, our very tall Chinese waiter, never knew my name but referred to me as “pickle beets” because I ordered them with almost any dish I had. Some would say I never had any taste! 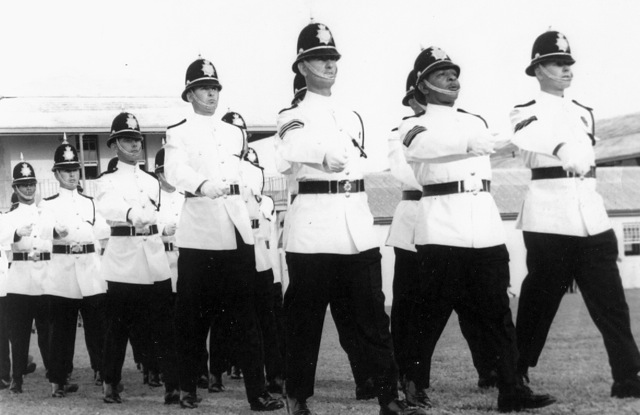 Officers parading for the Annual Inspection by H.E. The Governor Lord Martonmere
Terry is in the second row immediately behind Sgt Jim Woodward
who is flanked by Sgt "Bongo" Williams and Sgt Jimmy Moir

I had to wait until Guy Fawkes Night (5th November) later that year for my first taste of real trouble. The Royal Gazette of 7th November reported serious disturbances on Court Street and vicinity. As a result I was hospitalized with a lacerated nose by courtesy of a flying bottle.

Unfortunately, that paled into insignificance the following year, in February 1965, as all the Force was involved in policing the BELCO disturbances, which sadly resulted in an unpleasant aftermath. Ian Davies was seriously injured and I don’t think ever fully recovered.   Ian was very kind to me when I first arrived by giving me a tour of the Island in his open top sports car - many reading this will remember him - a gentle giant is an apt description of Ian as I recall.

These disturbances culminated in me and others (Chris Muspratt, who also returned to Staffordshire, was one) giving evidence in the Supreme Court case against Union Organizer, Dr. Barbara Ball.

At this time there was talk that following a Genera Election - the following year I believe - expatriate officers would be expelled from the Island. Although this was never to materialize it made me very unsettled and I applied to rejoin my old Force.

So what happened to me? There is a twist to events here. I was reappointed to the Staffordshire Police and because I repaid all my previous pension contributions, which had been refunded to me upon leaving for Bermuda, I was allowed to count my previous service.

This allowed me to take my promotion examination soon after returning, and much to my surprise, I qualified. As the months passed I kept thinking about my friends in Bermuda, and pictured them at Admiralty Cove or on Elbow Beach, which influenced me to successfully apply to return to Bermuda. I surprised everyone by submitting my resignation and within a couple of days I had been interviewed by my seniors, and been called to Headquarters to see an ACC, who all warned me that I would not be allowed to rejoin again if I didn’t settle in Bermuda. I decided to continue with my resignation and a most unusual event occurred.

I was instructed to see the Chief Constable who gravely told me that I was throwing away a good career in Staffordshire. He then shocked me by saying that if I would stay he would promote me to Sergeant. Well, what could I do? I accepted and did not return to the Bermuda Police.

I was lucky to serve in many roles and departments, patrol and station sergeant, Sergeant at District Training Centre and an attachment at Scotland Yard. As an Inspector I was responsible for the Crown Courts, and whilst in that rank I was dispatched to Liverpool with many other officers to help deal with the Toxteth riots. Moving on, I did a three-year spell as Chief Inspector Regional Training at Tally Ho Training Centre in Birmingham. Later, I was Acting Superintendent in two different sub-Divisions, and eventually a substantive Superintendent in the Complaints Department, moving after six years to take over as Force Training Officer, and finally to be Head of Personnel/Training for the Force. 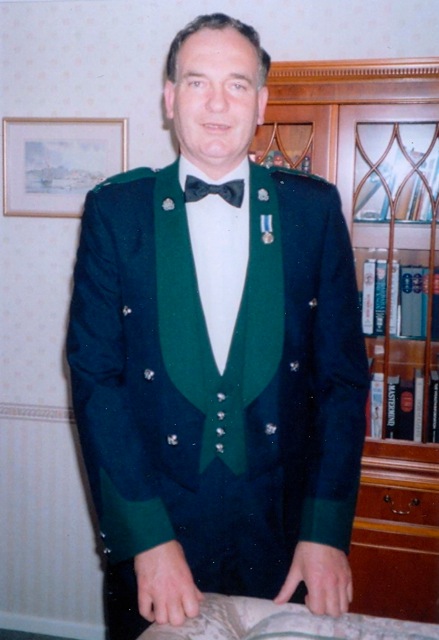 After early retirement from Staffordshire Police I worked for the Health Authority and later the Healthcare Commission for nearly six years as a Lay Chairman dealing with complaints by the public against doctors, nurses, hospitals and dentists. This was very challenging and satisfying but since my contract with the Commission finished I have concentrated on travelling and very much enjoying life.

The photos I post are me at Heyl’s Corner; in a contingent of officers marching on the occasion of the Bermuda Police being inspected by H.E. The Governor, Lord Martonmere; and in Staffordshire senior officers mess uniform.