A BRIEF LOOK AT MY YEARS IN BERMUDA

My father, William McCormack, was married to Margaret Moylan in 1930 in Dublin, Ireland. My father had a lengthy police background in Ireland.   He was appointed by the British Colonial LAW office in London to the rank of Sergeant Major and posted to the Island of Mauritius where upon he and my mother arrived in Mauritius in 1930. He took over the command of the Beau Bassin Police Station as the officer in charge.

I was born on February 21st 1933 in my parent’s quarters which was over the police station in Beau Bassin. We lived in Mauritius for eighteen years.

I received most of my schooling there until my father retired and we returned to Ireland to live.

I attended Atlantic College in Dublin graduating in 1951 with a First Class Certificate of Radio and Navigation. I was accepted by the Marconi International Marine Communication Ltd. in Liverpool, England. I was appointed as a seagoing radio officer with the British Merchant Navy sailing out of Liverpool on the H.M.T. Empire Test.   I served on various ships for two and a half years. Having completed my service I was paid off in London, England, where I applied to the British Colonial Office for a posting. I was accepted having been given the choice of three colonies and I picked Bermuda because of the similarities to Mauritius.

I received my police training at Mill Meece in Staffordshire, England.   I then embarked on a passenger ship Reina Del Pacifico and sailed to Bermuda in the company of John Hobbs, John Bull, and John Eastwood.

We arrived in Bermuda on April 30th, 1955. where we were met on board by Sergeant (Joe) Nixon who conveyed us by boat to the dockside and then up to the Victoria Barracks in Hamilton where we were billeted. 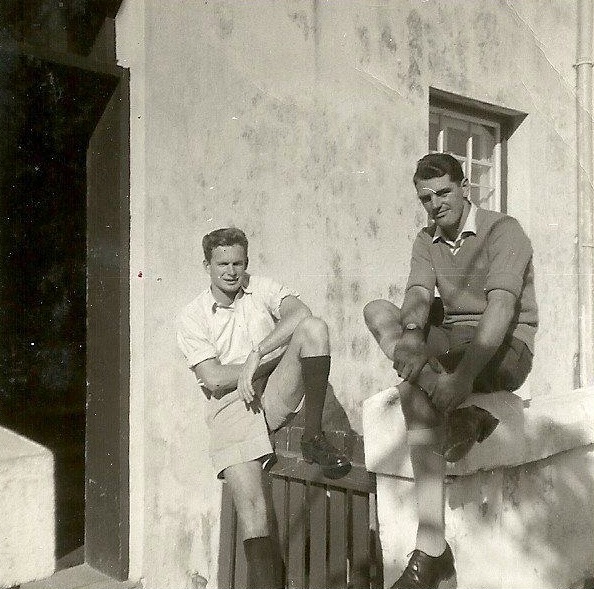 I was assigned as a beat constable to the City of Hamilton. On my first night in the barracks at three o’clock in the morning I was awakened by a very noisy hammering on the doors of our rooms. A Sergeant was in the hallway saying to all of us, ”OUT! OUT”! There’s a riot in the prison.” A lorry was outside waiting to take us to the prison immediately. We were issued with a steel helmet and a baton. 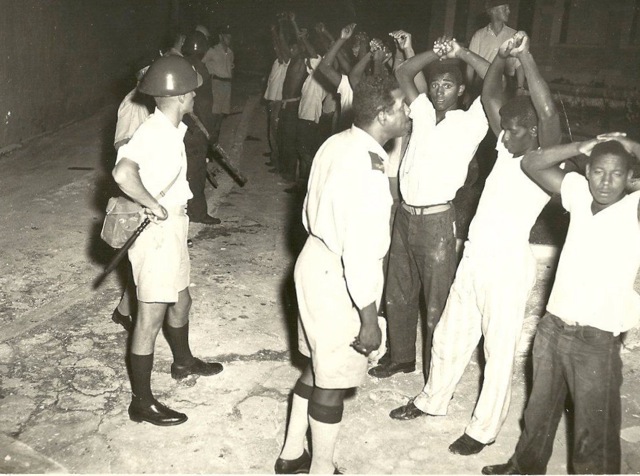 Bill was called out to a riot at the Hamilton Prison (where the
Hamilton Post Office is now located)on his first night
in the barracks.  This scene shows the police with a group of prisoners.

Within a few moments we were at the prison gates in Hamilton where the Deputy Commissioner, Max Bronte Parker was in charge. We were all at the main gate when there was an order given by the Deputy to the constable in charge of the tear gas. The order was that when the gates were opened a tear gas canister was to be launched into the main yard. The tear gas, unfortunately, backfired and as we charged into the prison there was an immediate retreat. The prisoners were heard to be laughing most heartily. That was my first introduction into policing in Bermuda!

My first assignment was  walking the beat in Hamilton, and I recall an incident one night after midnight, at a time when Front Street was deserted.  Suddenly there appeared a moped emitting a tremendous noise.  I signalled the rider to pull over.  He prpmptly stopped a foot away from me, and immediately put the moped on its stand, dismounting as he did so. The vehicle was covered from front to rear with “foxtails” and was reconstructed to enhance the sound!  The young gentleman wanted to know why I stopped him and I explained that his moped was breaching the noise laws that were in effect, at which time he remounted the moped gave me the finger, and tore off at a tremendous rate of speed.  His name was Cumberbatch. Suffice it to say that a little while later, when I was a Parish Constable, we met on several occasions, had coffee together and laughed about that incident.

After a spell on the beat in the City I was assigned to being a Parish Constable for Smith’s and Hamilton Parishes based in St. George’s. Each parish constable was provided with a BSA motorcycle as the Parishes were quite large. Later I went to Traffic assigned out of Hamilton with Inspector John Marshall in charge. 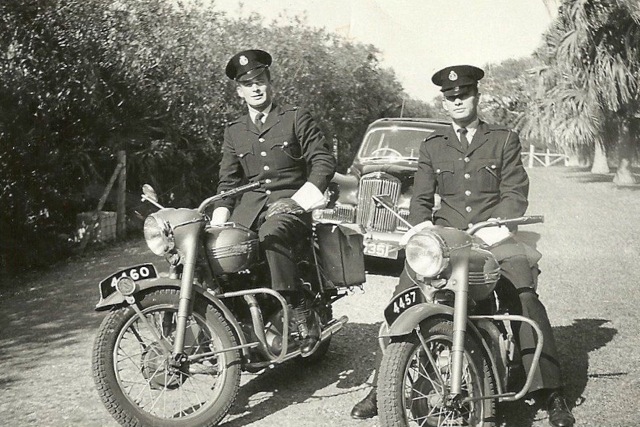 Bill and Rick Hodgson on traffic patrol on their BSA motorcycles

The future Commissioner of Police “Nobby” Clark was one of my partners in a two-man car policing the whole island. “Nobby” Clark was the only Canadian on the Force. His sense of humour was always outstanding in whatever situation occurred, including his continuous cause to frustrate Inspector Marshall and others who came his way. 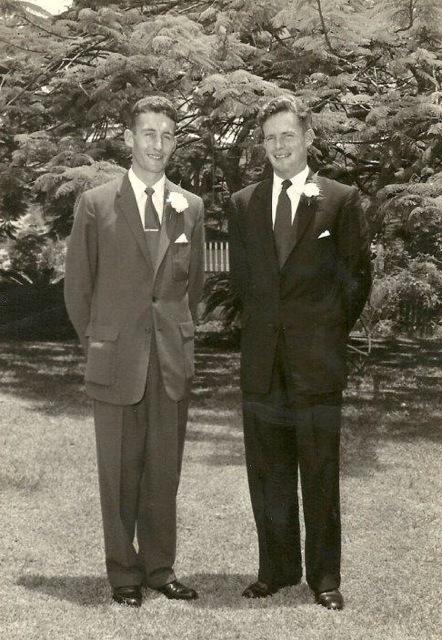 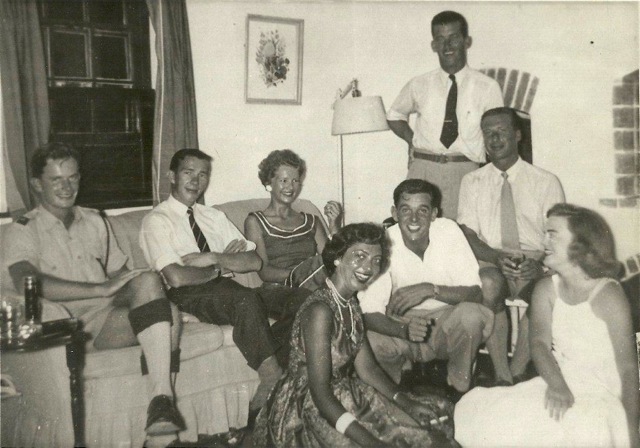 The Victoria Barracks was later closed and the single men were then billeted at Admiralty House in Pembroke Parish. John Eastwood bought a fishing boat and because both he and I were avid fishermen. This was a great boon for us until unfortunately the boat sank at Admiralty House so was totally out of commission. We resorted to fishing off the rocks where our resident cat without a tail, “Mugsy” stole all our fish! 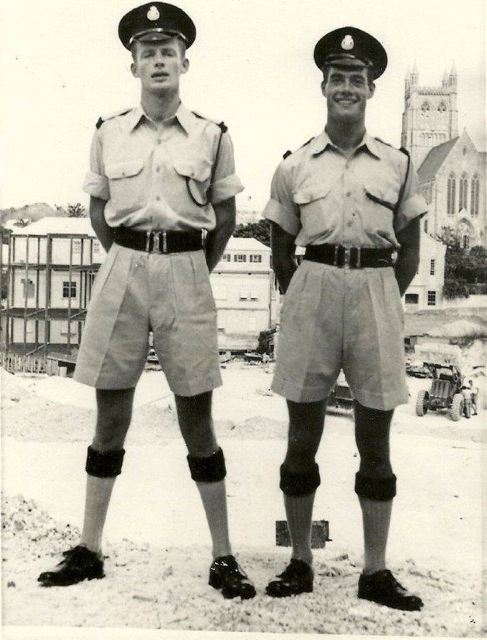 Bill with his good friend P.C. John Eastwood
standing on the site of what became City Hall

Bermuda was a single man’s heaven because of the influx of American and Canadian tourists during the tourist season. It also accommodated what was known as the College Week season in March. One of the occasions wherein some of us were attired in pith helmets, which was a hidden disadvantage orchestrated by the powers-that-be for a greeting that occurred with the students when they were brought by boat to the docks. Three of us were assigned to be their greeters. They disembarked in a wave of young exuberance, heading straight for the three of us to capture our helmets which they did with glee. Needless to say, we were not amused! 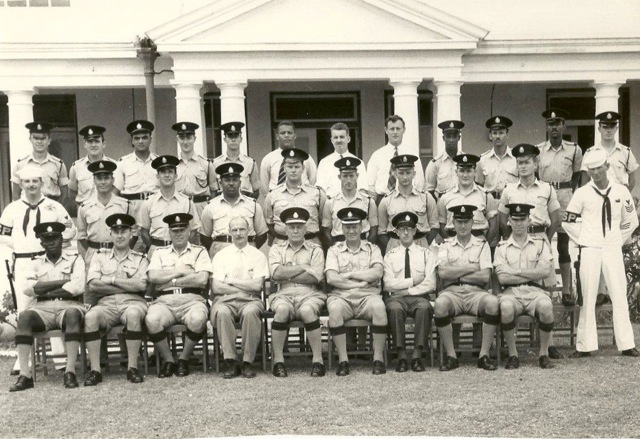 In 1957 Bill (2nd from right on middle row) was one of the officers who attended
a Police Course held in Bermuda.  We will attempt to identify everyone in this photograph.
If you can assist please email us at expo.bermuda.com

During the latter part of my service I was fortunate while on patrol with Rick Hodgson, to have met a young lady, Jean Kernick, a Canadian who was working in the Trust Department of the Bank of Bermuda. We were married August 28th, 1958 in St. Theresa’s Church in Hamilton, and had our reception at Admiralty House. We celebrated our Golden Wedding Anniversary in Bermuda in 2008 and found it as beautiful as ever. 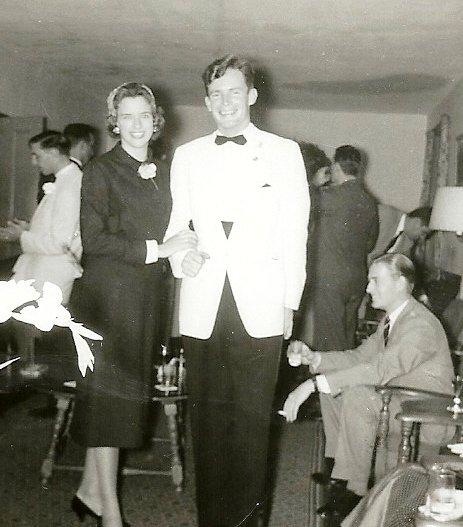 Jean and I honeymooned in Toronto where I began my inquiries into joining the Toronto Police Force. We returned to Bermuda where I continued my service, resigning in May 1959.

Editor’s Note - After leaving Bermuda Bill joined the Metropolitan Toronto Police Force where he had a distinguished career, working for many years as a homicide detective, and eventually rising through the ranks to become Chief of Police from 1989 – 1995. He has been described as arguably the most popular Chief of Police in the history of Toronto. In 2005 he wrote an excellent book, “Life on Homicide; A Police Detective’s Memoir” about his experiences as a detective. CLICK HERE for more information about Bill's book on Amazon.com

Bill has promised to write more about his police career in Toronto, and we look forward to receiving it.

We were delighted to receive the photos Bill provided to accompany the above article, most of which we had never seen before. 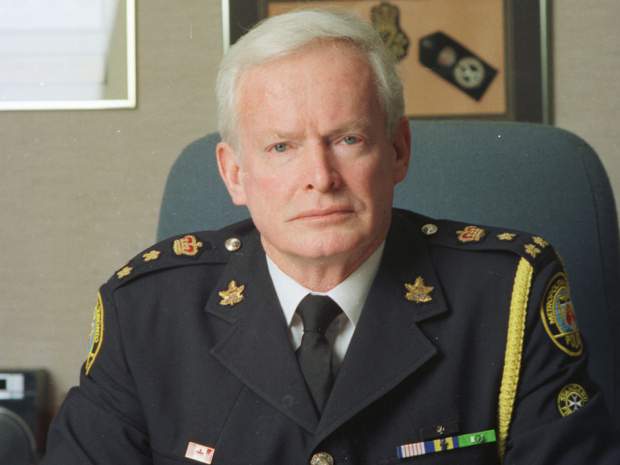 William "Bill" McCormack, Chief of Police for the
Metropolitan Toronto Police from 1989-1995

We were deeply saddened to hear that Bill McCormack died on 8th September 2016 at the age of 83.  CLICK HERE to read more about Bill.