The Royal Gazette has published an article today (11/3/13) -  CLICK HERE to see the article - about a new book by British author Mel Ayton providing details of the assassinations and murders committed in 1972 and 1973 by Erskine “Buck” Burrows and Larry Tacklyn who were both hanged in 1977 for their involvement. “Justice Denied” implicates a third man, who is not named, as a key accomplice. 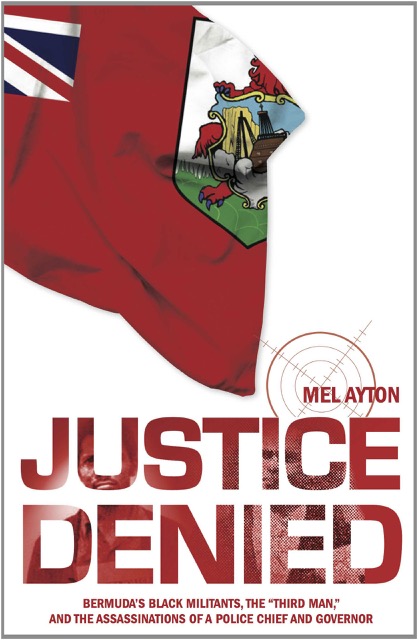 The book is available at local bookstores although all copies have been sold this week and more have been ordered. For anyone living overseas ‘Justice Denied’ can also be ordered from Amazon.com (CLICK HERE for details).

Amazon's description of the book is as follows:-

Justice Denied - Bermuda's Black Militants, the 'Third Man' and the Assassinations of a Police Chief and Governor is the first full account of the 1972/1973 assassinations of Bermuda's Governor and Police Chief. The book includes a Foreword by Dr. Carol Shuman,  psychologist, former newspaper reporter,editor and author.

During the 1970s, a black power organization in Bermuda who modelled themselves on the American Black Panthers, conspired to bring about social change "by any means necessary", including assassination. The struggle for equal rights in Bermuda during this period both imitated events in the United States and was heavily influenced by them, especially the role American black militants played in encouraging Bermuda's youth to challenge the white power structure on the island. Bermuda became the first nation to suffer the violent effects of the importation of 1960s-style American Black Power militancy. As a result, Governor Richard Sharples was murdered as well the island's Police Chief George Duckett and others.

Justice Denied points the finger of guilt at a faction of the black militant group, led by the 'Third Man', who controlled the convicted assassins. The author names the Bermuda businessman, a convicted drug dealer, who assisted the assassins in financing their political aims through drug deals and bank robberies. He also concludes that the real story about the assassinations was 'whitewashed' by consecutive Bermudian Governments in the interests of racial harmony.

For those of us who served in the Bermuda Police at the time of the murders this should be a fascinating read. We had hoped to provide a brief review of the book but missed out on purchasing the first copies and we await the next order arriving.