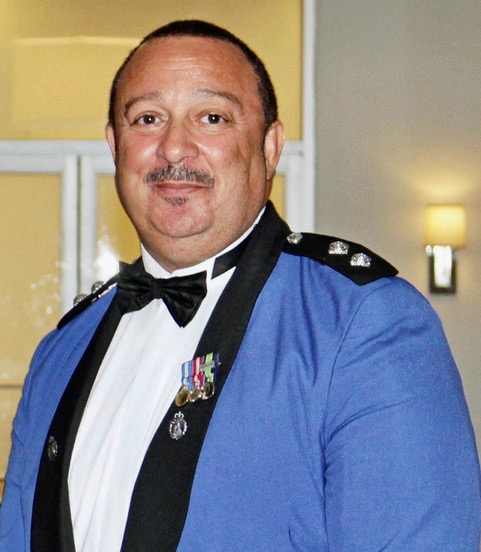 The Police Recreation Club’s main hall was a hive of activity on Friday evening 23rd November 2018 as invited guests, fellow colleagues, community partners, and friends and family members gathered to wish a fond farewell to Inspector Mark Clarke who officially retires as of 3rd December 2018 after completing 37 years of service in the BPS. 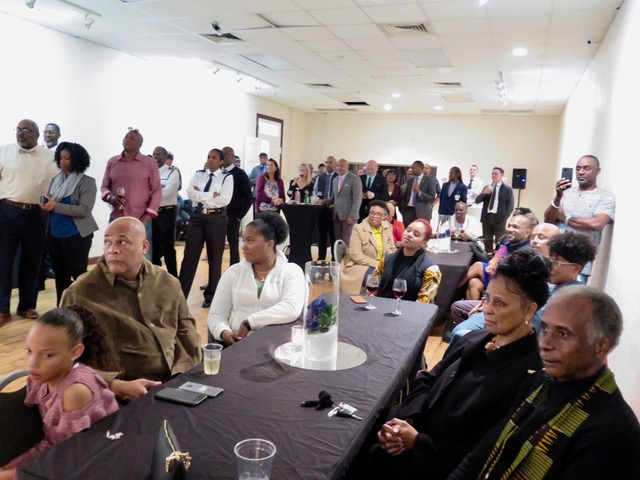 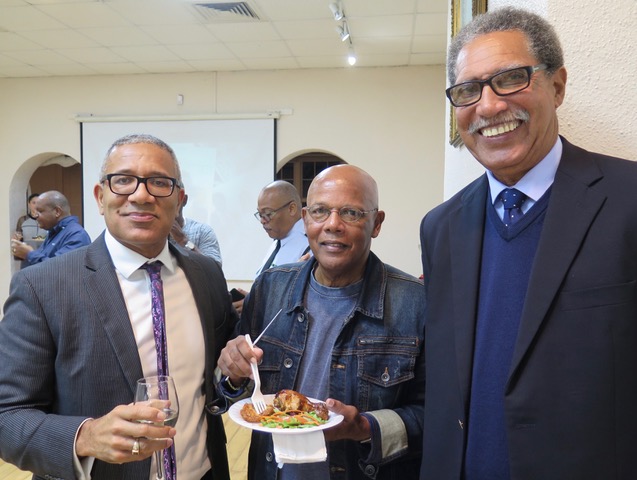 Director of Public Prosecutions Larry Mussenden (a former P.C.), Retired Supt. Larry Smith,
and Retired ACOP Carlton Adams who is still working for the BPS as a consultant 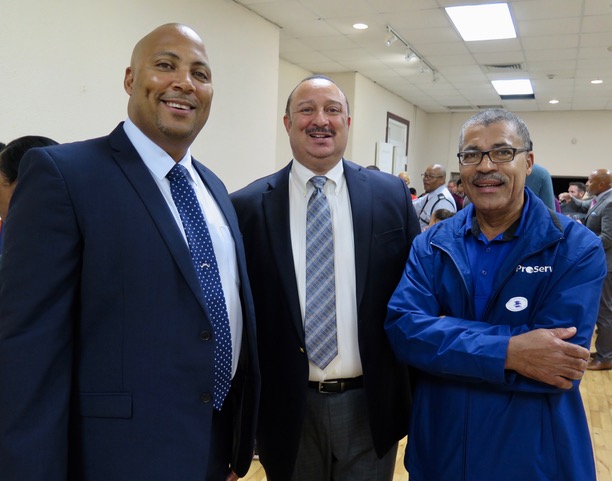 Mark has always been a very popular officer who has given exceptional service to the Bermuda Police especially in the areas of Domestic Violence and Child Abuse which became his area of expertise as a result of which he became the officer in charge of the newly created Vulnerable Persons Unit when it was formed in 2012.

Commissioner Stephen Corbishley spoke about Mark’s dedication to the BPS, pointing out that Mark is the longest serving officer and that his presence will be much missed. The Commissioner presented a beautiful cedar shield to Mark in appreciation for his 37 years of dedicated service. 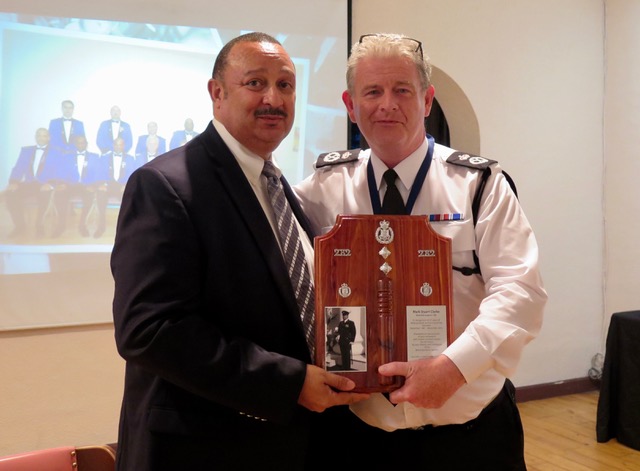 There were two people present at the party who were on the same Basic Training Course as Mark. These were now retired Insp. Kevin “Jimmy Moon” Christopher, and former P.C. Larry Mussenden, who went on to a legal career and is the current Director of Public Prosecutions. 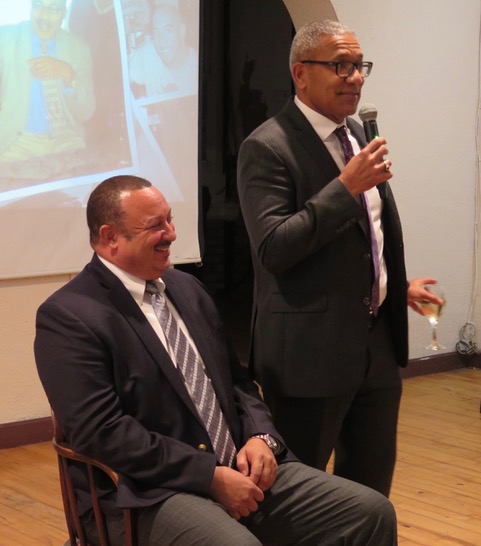 Larry recalled that he and Mark had been close friends since their early childhood having attended Prospect Primary, Warwick Academy, the Police Cadets and Basic Training Course together.  He praised Mark for his outstanding investigations in cases involving child abuse when he (Larry) was working in the AG's Chambers as as prosecutor, and also for his invaluable leadership of the Vulnerable Persons Unit in recent years. 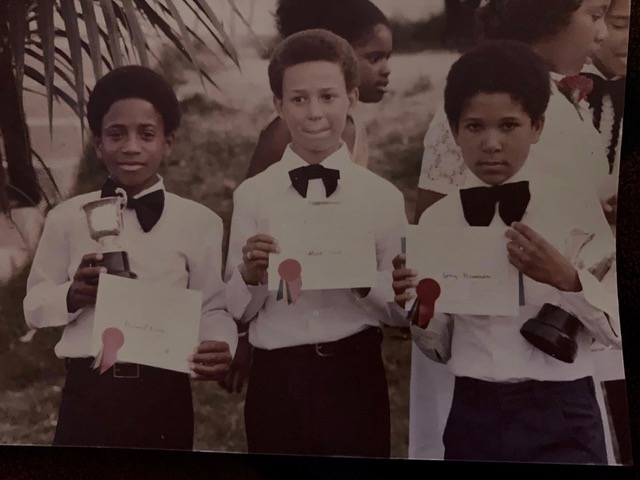 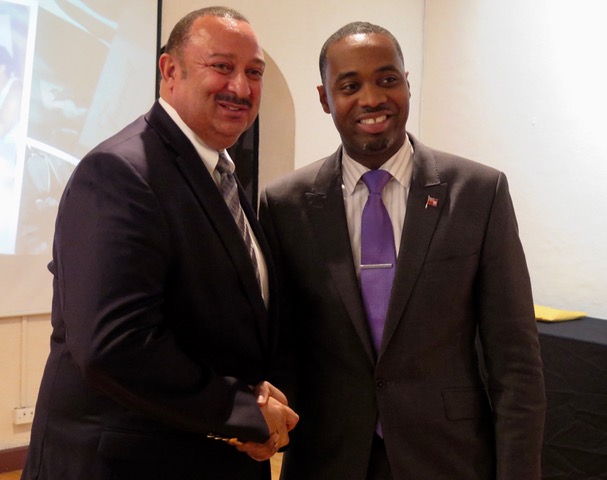 The Premier, the Hon. David Burt, MP, JP, took time out of a busy day in the House Assembly to come up to the Police Club and personally thank Mark for his 37 years of dedicated service to the commumnity and to wish him well in his retirement.

Retired Assistant Commissioner Carlton Adams, who is presently working as a consultant for the BPS investigating “cold cases” gave an excellent presentation on Mark’s 37 year career, as follows:-

“Mark Lyndon Stuart Clarke joined the Bermuda Police Force as a Cadet on the 7th December 1981 following in the footsteps of his mother Barbara, then a serving officer. After a year at the Bermuda College he commenced training on the 20th September 1982, as a member of Basic Training Course #32 along with 14 other Bermudians, among them Kevin “Jimmy Moon” Christopher, Lenora Maloney, Lloyd Duncan (now Bishop Duncan), and Larry Mussenden, the current Director of Public Prosecutions. 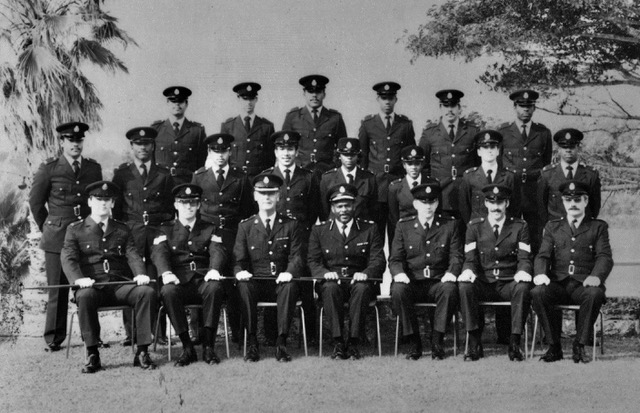 At age 18 Mark was the youngest on the course and will be the last of the group to leave the Service on the 3rd December. Mark applied himself enthusiastically to all aspects of the training and was described by the training officer as the best swimmer in the group.

Early on, a lifelong trait manifested itself prompting the training officer to record in the space opposite ‘Oral Expression’ in the first stage report. “Good - sometimes starts talking before thinking about what it is he is going to say.” The officer’s comment in the second stage report suggested improvement had taken place when he wrote “Good - thinking more before speaking”. However those of us who know Mark are aware that he likes to talk and says whatever comes to mind without hesitation or restraint; sometimes to the amusement if not the embarrassment of all within earshot. Not much has changed!

On the 3rd December 1982, his 19th birthday, Mark was appointed Police Constable 282 and shortly after he was posted to Central Uniform Division becoming immersed in general policing duties including static duties at Government House.

One evening when patrolling the grounds of Government House he encountered the Governor having a drink, he was looking into a mirror raising his glass, mumbling, apparently toasting himself. Not wishing to intrude Mark attempted a hasty withdrawal. The Governor called out. “I see you constable” insisting that he not leave, and inviting Mark to have a drink. Mark, apprehensive, declined pointing out that he was on duty, in response to which the Governor then said. “I am Commander in Chief, you answer to me.”

Mark complied and partook of a libation, the two entering into discussion for some minutes in relation to various artefacts (in the room) in which they held mutual interest. The Governor suddenly changing the subject imparted what he likely believed to be sage advice when he said to Mark. “Never marry the Help!”  Puzzled, Mark ventured a query. The Governor explained that his current wife was not the first and that she had prior to the marriage been in his employ in some capacity and, that now she was… miserable!  Mark eventually made it back to the station in one piece at the end of the shift.

As his career progressed he was appointed Detective Constable in Central C.I.D., becoming a competent and reliable investigator. He was also deployed to Eastern C.I.D. and the Major Incident Room investigating serious crimes. His passion however became the protection of children inspired following his involvement in separate investigations into the deaths of two very young children, murdered by their parents.

He was transferred to the fledgling Juvenile and Domestic Crimes Unit following promotion to Sgt in 2001 having been told to make it into an effective entity to respond to criminal behaviour involving children, and arising from domestic incidents involving women. In the ensuing years Mark was involved with multiple investigations securing convictions against offenders whilst forging relationships with local stakeholders Child and Family Services, the DPP’s Chambers and overseas partners by whom he is now highly regarded in consequence of his efforts.

In other investigative initiatives he consistently displayed exceptional but not surprising strength of character when called upon to investigate some of our number for quite serious offences (unrelated to Child safeguarding) when others lacking testicular fortitude declined to do so.

He has made presentations in Australia and Trinidad in relation to Child Safeguarding at meetings of the Interpol Specialist Group on Crimes against Children, and in 2014 was instrumental in arranging for the 32nd meeting of that body to be held in Bermuda. The event was attended by over 200 persons from fifty countries. Mark has also made joint presentations at NCA meetings on Child Safeguarding in Miami, Florida and appeared before Parliamentary Committees contemplating the introduction of legislation here in Bermuda in support of Child Safeguarding in 2016, and in February of this year.

Among many accomplishments Mark is proudest of a paper submitted by him in 2003 at the request of the then Minister of Health entitled Domestic Violence Child Abuse and Sex Offenders in Bermuda, a consultative document that subsequently was of huge assistance to the Government in introducing Child Pornography and Sex Offender management legislation, and amendments to then existing law relating to Registration and Public notification of Sex offenders.

Recommendations contained within the document at the time are reflected in current, and new and updated legislation, as is the ethos of investigation and Public perception surrounding Child Abuse, Domestic Violence and Sexual Assault. Fifteen years after its writing this document remains invaluable for purposes of reference.

Mark was promoted Inspector in 2008 and with the exception of the period between 2008 and 2012 he has been the officer in Charge of what is now known as the Vulnerable Persons Unit.

During his years of service Mark has been the recipient of Commendations from the Chief Justice, the Director of Public Prosecutions, and was awarded 4 Commissioners Commendations, numerous Letters of Good Work and Merit Awards. He has also received letters of appreciation from grateful members of the Public.

Displayed on a wall in Marks office is a thin slip of paper upon which is printed the following quotation by Nelson Mandela:-

"There can be no Keener revelation of a Society’s Soul than the way it treats its’ Children."

Perhaps more than anything this explains Marks exceptional drive and commitment to ensure that our children are protected as best as can be. December 3rd 2018 will mark completion of 37 years’ service to the people of Bermuda as a member of the Bermuda Police Service.” 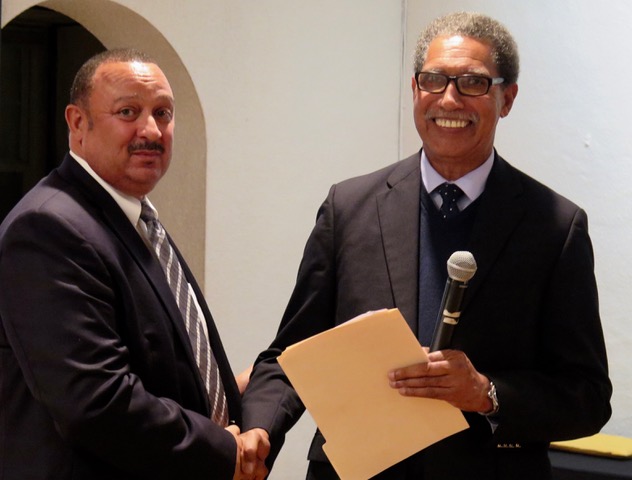 The speeches concluded with Mark thanking everyone in attendance for their presence. He was particularly delighted to see Kevin Christopher and Larry Mussenden, both of who had been on his Basic Training Course back in 1982. 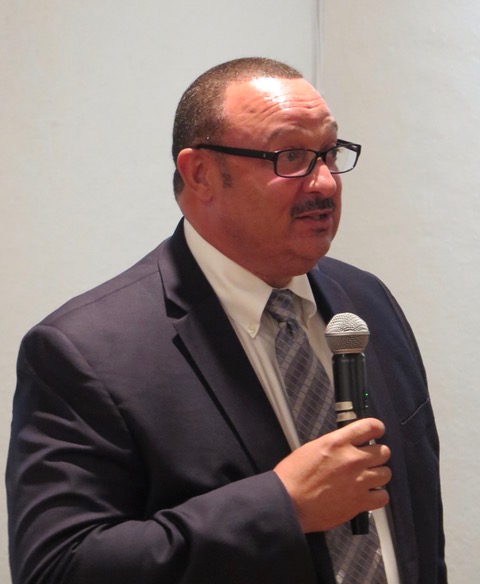 Inspector Mark Clarke was not shy about taking the microphone!

Mark noted that during his 37 year career he had worked for 9 Commissioners, 10 Premiers and 8 Governors. As he said, “37 years … to think I’ve done all that, and may I say not in a shy way! Regrets, I’ve had a few but I did what I had to do”.

Mark paid tribute to his many friends and colleagues, and to his family without whom he said he would not have been able to do what he had to do. He commented that he may not have been able to change the world but he went to great lengths “to embarrass the guilty!” After quoting Winston Churchill who once said, “Difficulties mastered are opportunities won” Mark concluded by saying, “I’d like to think that I did that.” 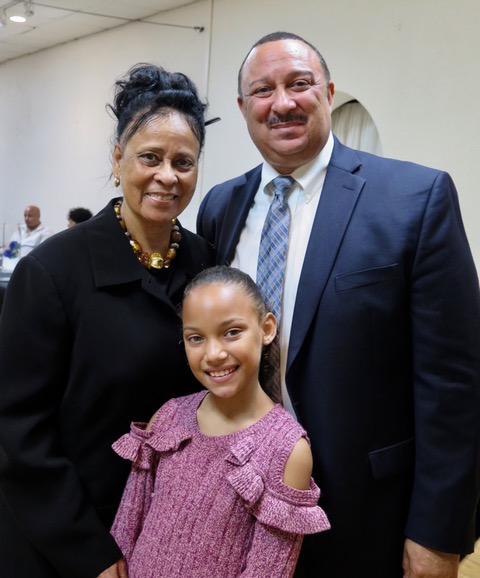 Inspector Mark Clarke with his mother Barbara who served in the BPS
from 1973 - 1994, and Mark's lovely granddaughter Kalasia

Everyone present gave three hearty cheers for Mark who thanked everyone for attending this very nice event.