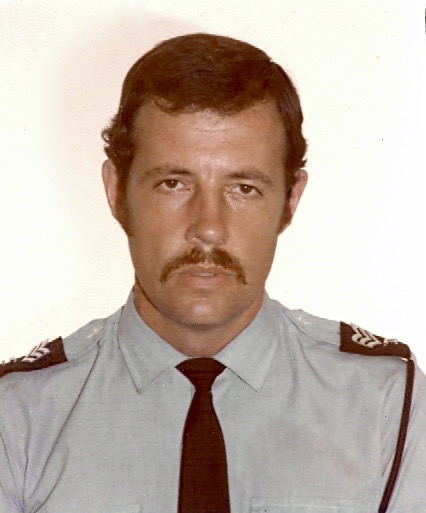 We have received a request from Nicole Young in the Government Pensions (Benefits) Department for information about our good friend, former Sgt Ron Wallace who served in the Bermuda Police from August 1963 to February 1990.

To the best of our knowledge Ron returned to his native Scotland after his retirement. We have consulted with our expert on all things Scottish, Davie Kerr who had heard second-hand that Ron was believed to be living in a Perthshire village caller Auchterarder, but that was over 10 years ago.

If anyone can assist us re Ron's present wherabouts it would be much appreciated and we would be happy to put him in touch with Nicole.

For anyone reading this who is a former Bermuda Police Officer but is not included on our List of Colleagues, which can be found at  http://expobermuda.com/index.php/colleagues,  we would be delighted to hear from you, and if you send us your contact details we would be pleased to include you on our List.  We would also be willing to search through the Police Register at Police HQ for your file which usually includes a copy of your old warrant card photo which we could send to you.  This photo of Ron when he was a Sergeant is copied from his file in the Register.

Shortly after posting the above request for information about Ron Wallace,  we heard from George Rose who had spotted the fact that the internet site Pic Click in the U.K. had been used to sell a Bermuda Police Long Service medal and bar in the name of Ronald Wallace. The sale was completed on 7th March this year (the medal sold for £207.09).  This would probably indicate that Ron is no longer with us but we are still trying to confirm whether that is correct.

John Skinner informs us that Ron was awarded his LSM on the same day as Owen Marsh, Cyril Plant and himself in 1985.  Ron married his first wife, Patricia, while living here in Bermuda and they had a son, Michael.  We understand that after Ron and Pat divorced, Pat and Michael went to live in England.  John recalls that Pat died a few years ago, and that Michael had joined the Metropolitan Police.   With that in mind we have been in touch with our good friend Ken Van Thal who joined the Met after leaving Bermuda, and Ken is very kindly making enquiries to see if he can locate any information about Michael.  We will keep you informed of our progress.

I have to report that Ken Van Thal is going above and beyond the call of duty trying to track down Ron Wallace.  Ken has checked with Ron's old school in Scotland, with no luck; he has also checked with the Met where they have no less than five Michael Wallace's in their Force.  It's not easy obtaining any inform about them, but Ken has spoken with one who is not related to Ron, and he is trying to contact the others.    Many thanks Ken for all your efforts.

I mentioned above that Ken Van Thal was going above and beyond the call of duty in trying to locate Ron Wallace. Well, Ken utilized  all of his investigative skills and has finally managed to locate Ron to a nursing home in Perth and has been in touch with Ron's partner.  Will try to obtain a little more information about how he's doing these  days but we understand that he's not doing too badly.

If Ken was still in the BPS I would be recxommending him for a Commissioner's Commendation for sure.  Once again, many thanks Ken for solving the problem.  Have informed the Government Pension Department accordingly.