We recently came into possession of this photo and immediately realized this is one 'dangerous' looking group of men by any definition!

We asked if you could assist us in identifying everyone in the photo, which shouldn't have been too difficult with all the clues on display. We also wanted to when was it taken and what exactly  they were doing other than posing for a "shot!

For good measure we asked if you could figure out why we  chose to publish it this week? (1st July 2018)

The reason we chose to publish it this last week is because we had received an excellent article for our "Then and Now" column written by former P.C. Ian Kittle who also sent us some great photos, especially of his time here in Bermuda. In fact he sent us more then we could include in his article so we decided to publish this one separately,  followed by an Eastern Divisional photo in our "Who, Where and When" column at http://expobermuda.com/index.php/who-when-where/681-men-from-the-east  because they were too good not to be published.  I thought we had previously published the Divisional photo but couldn't find it.

We are indebted to Ian for taking the time and trouble to sort through his photos and send them to us.  We would be delighted if you could follow suit and consider writing a "There were certainly some amazing characters who worked down East, and for some reason we seem to have far more photos from that end of the Island!

Now down to identifying this group of reprobates!  We also posted a copy of it on our Facebook page which you can access at https://www.facebook.com/BDAExPolice/ and we had most of the answers within 48 hours. Their names are included in the caption.  It was certainly taken at the Prospect shooting range and we have yet to confirm the date or year it was taken but Ian Kittle is checking to see if he recorded it anywhere.

"It was in the days that BPS Divisions would on a regular basis get together for a variety of competitions such as soccer, darts, snooker etc etc. BBQs were also arranged by each Division. These get togethers do not happen anymore but were great team building events that promoted friendly rivalry throughout the Service. Shame really as they were always well attended and very lucrative for the host PRC." 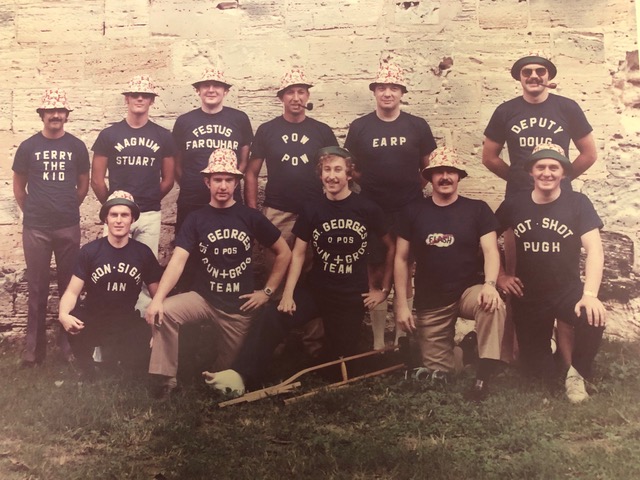