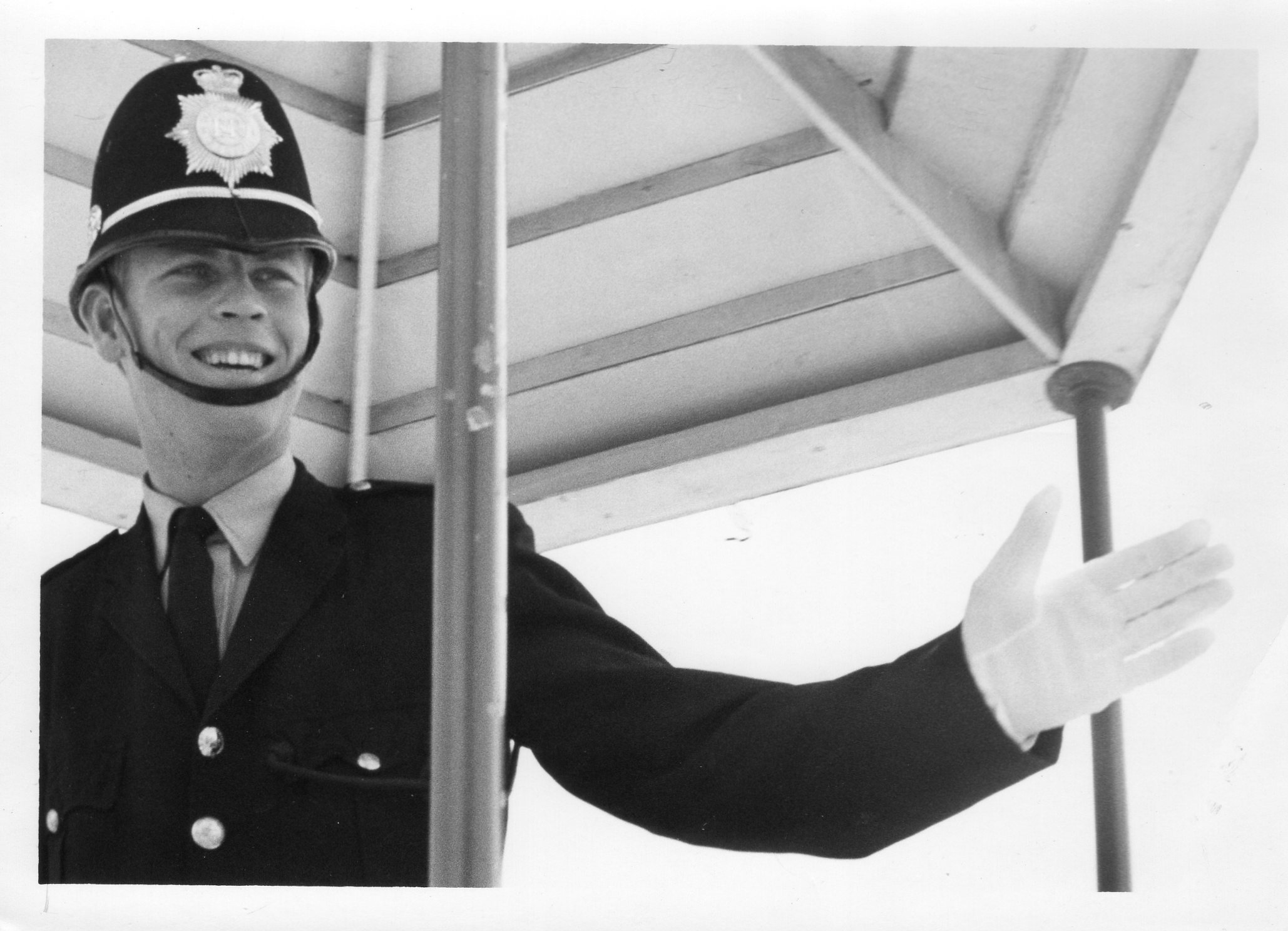 Young P.C. Tom Barnes directing traffic in the birdcage on Front Street
I was born in 1943 in South Shields. Co. Durham. On leaving school, I became a butcher-slaughter man. When I was 19 years old, I joined the Northumberland Police, serving in Ashington & Whitley Bay. Just over 2 years later, I joined the Bermuda Police Force & I met Roger Sherratt, who took me to an expensive gents outfitters, & convinced me to buy a PINK jacket, which was the fashion then!!! On entering the police club… you can imagine the piss taken out of me. I soon dyed it blue. “ Thanks Roger”!  (Editors note - I deny all knowledge!)

While in Bermuda was working on the beat – beach squad with Freddie Bean – dog section with a dear friend called “Crock” Custerfield Crockwell. Crock trained me to box & I fought Willie Gallagher, who beat me.

Police Boxing – Fight of the Night
This photo of the first night of Police Boxing shows Davie Kerr and John Balsdon
who won fight of the night, and in the background (l-r) John Mulholland,
Curtis DeGraffe, Tommy Barnes, and Willie McCracken

On one evening I stood in for Mike Caulkett, it nearly ended up my last night. While on duty I chased & caught “a fail to stop” which resulted in me being stabbed 9 times, both my lungs collapsed.

The next phase of my life was a trip on a Baltic Trader, called the “Fletcher Christian”. It was a project headed by D.S. Des McSherry. There were 12 crew. Only Des, a German, Rudy Brenger & myself had any sailing experience! While in Hamilton we fired the engine up and the ship’s cat promptly hid until we shut them down. We set sail to Puerto Rico en route to Fiji, as we were going through the channel the engine blew up !! We had over 3 thousand square feet of sail up. At that point the ship’s cat jumped overboard. Eric Sanderson who was either fearless or daft jumped overboard to save it. Being under full sail was a PROBLEM. We lowered the liberty boat & rowed back for Eric and the cat. We then had to try and catch up with the ship, which was still under full sail. I think Mike Caulkett was the other oarsman. After that incident we were becalmed in the Sargasso Sea (Bermuda Triangle).

The Fletcher Christian at Sunset in Hamilton Harbour

Tom on the right with Mike at the helm

As we were overdue in Puerto Rico, the U.S. Airforce were sent out to find us. On locating us, their computer system (the Loran) took a setting & placed us one mile inland from Virginia! But a second reading proved us to be where we had anticipated. On arrival in Puerto Rico the first rate coastguards towed us in, and we waited for a new engine. Eric fell off the rigging and injured his leg, which turned gangrenous. Next stop was Santa Marta. Reiner Brenger took a ferry trip, it was at the time Bobby Moore (Captain of the England football team) had been arrested for emerald theft. While on the ferry a crowd of locals gathered, they clapped their wrists together and said to me “Bobby Moore?” (Editors note - both Bobby Moore and Tom had shocks of blonde hair) all my protestations were ignored… on reaching the town, another crowd gathered, so I decided to make the most of it, & played to the crowd, I did a dribble and a kick , much to their delight. They were cheering and cars were beeping their horns. Next stop was Panama. We were all getting fed up with Des the captain, and at that point Mike Caulkett left the ship. Next stop was Ecuador (due to a leak), then we went onto the Galapagos & Marquessa Islands. I went onto to Tahiti, but also fell out with Des. I left the ship and caught a cruise ship to Australia, I spent 6 weeks there and then took a cruise ship home.

After that I bought a motor cycle and set off to see how far I could get in Europe. After several weeks of debauchery the engine on the bike blew up and I returned home.

I started off getting a job as a tyre salesman – I met up with Helen Biden who had nursed me in intensive care in Bermuda after my stabbing in Bermuda. We were drinking in a pub when I heard the two tone horn of a police car go by, I looked up and Helen said “That’s where you want to be.” She was right.

I joined the Sussex Police, where I met up again with Mike Caulkett. I worked on the beat – crime car – special branch – surveillance – close protection - and finished my police career in the dog section.

Tom as a dog handler in the Sussex Police

I was also sent to Rhodesia for the elections, to look over the poling stations, what a beautiful country it was.

I then married Joannie DeFontes who was diagnosed with M.S. two weeks before the wedding (poor lass). Our marriage ended after 8 years and she returned to her family in Bermuda.

Since then I married Juliet in 1983, and we have enjoyed travel and retirement. We still keep in touch with Mike & Jill Caulkett, and we have also met up with Mike Parris & his wife ( a former ballerina). Mike was working for Arundel Castle, but has now retired.

Can you recognize these three?  Mike Caulkett, Tom, and Mike Parris

We have become boring caravanners and love it, and we still go abroad during the winter.