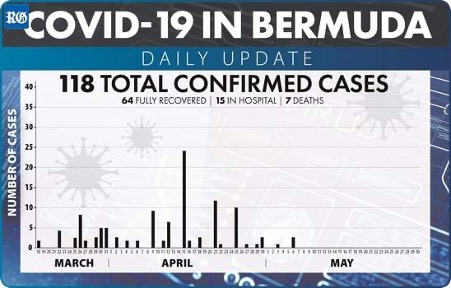 Today's Royal Gazette (8th May 2020) carries a Press Release from Health Minister, Kim Wilson, reporting that a total of five care homes in Bermuda have now recorded cases of Covid-19.  The release reads as follows:-

"A total of five care homes have now recorded cases of Covid-19, the health minister said this evening.

Kim Wilson confirmed that three new cases reported on Wednesday were all residents in care homes.

Outbreaks of the virus were earlier confirmed at Westmeath Residential and Nursing Home, in Pembroke, and the Matilda Smith Williams Seniors Residence in Devonshire.

Ms Wilson did not identify which care homes recorded the three new cases.

She said: “Unfortunately, I must announce today that the three new positive Covid-19 cases reported in Wednesday evening’s press conference were residents in three of our long-term care homes, with one positive in each of the homes.

“This takes the total number of Covid-affected care homes to five.

“Two of the cases were found as part of the routine testing and the third because of a symptomatic elder. I was unable to comment on this at Wednesday night’s press conference as all families had to first be notified.”

The minister said all cases were under investigation, but that extra control measures, including testing and isolating residents, were now in place for the three additional care homes.

She said: “We will not be releasing the names of the facilities unless there is a public health need. There is increased stress for the homes, residents, families and staff during this time and recent experience has shown that a disclosure makes managing the outbreak and continued care of the residents a challenge.

Ms Wilson said 262 care home residents and 330 staff members had been tested at 16 of the island’s 21 care homes. A total of 545 results have been negative and 44 positive."