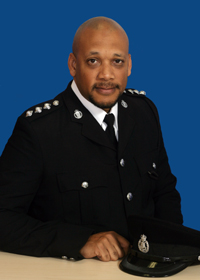 The Royal Gazette and Bernews report that Governor John Rankin, the Governor, has announced the appointment of Superintendent Darrin Simons as the new Deputy Commissioner Police Commissioner.

Mr Simons, a 25-year veteran of the service, replaces Paul Wright, who retired at the start of this month.

The Royal Gazette quoted Mr. Simons as saying that he was grateful for the “new opportunity to serve Bermuda”. Mr Simons said the Bermuda Police Service were “a big family”. He added: “There are women and men, both police officers and support staff, that get up every morning and commit themselves to making Bermuda safer — and I am particularity proud to be part of that family.”

He said: “Mr Simons demonstrates the right skills, the right attitude and the right values to be an exceptional deputy commissioner.”
For more information about Mr Simons appointment you can view the Roya; Gazette article at http://www.royalgazette.com/news/article/20181123/simons-named-new-deputy-police-commissioner

Bernews also reported on Mr. Simons promotion and their report can be viewed at http://bernews.com/2018/11/darrin-simons-new-deputy-commissioner/#comment-4660948

On behalf of the Bermuda Ex-Police Officers Association we sincerely congratulate Mr Simons on his promotion to Deputy Commissioner and wish him all the best in his future endeavours.  He will have the full support of our Association.

The following is a brief biography of
Mr. Simons taken from the BPS official website

Superintendent Simons is a member of the Bermuda Police Service Crisis Incident Stress Management (CISM) Team, and he is an accredited Gold Firearms Incident Commander. He has received training from the FBI and the DEA in the United States and he is a graduate of the International Commanders Programme in the United Kingdom at the Police Staff College at Bramshill. He has been an active member of the Bermuda Police Association and he led the team during their most recent contract negotiations.

Superintendent Simons joined the Bermuda Police Service because it seemed like an exciting job. He decided to make it a career because of the tremendous satisfaction he gets from knowing that he is significantly contributing to making our community safer.

Superintendent Simons believes community safety is a joined up effort, involving all areas of government and the community, with the individual at the centre. He encourages a partnership approach to tackling crime and sincerely believes that everyone has a part to play in making Bermuda safer.