Richard and Debbie outside the old Training School building at Prospect

Richard joined the Bermuda Police Force at age 25 on May 12, 1980, after serving 4 years with the Second Battalion of the Royal Regiment of the British Army in Germany and Belfast, Northern Ireland. After graduation on Basic Course #27 along with Doc Bourne, Paul Singh and Linda Perry – among others - in August of 1980, he was assigned to Central Uniform out of Hamilton Police Station. His first night on duty brought him home dirty and disheveled as he had chased well known Brandon Bancroft over a bank on a minor offense! This was only the beginning of his full commitment to police work. 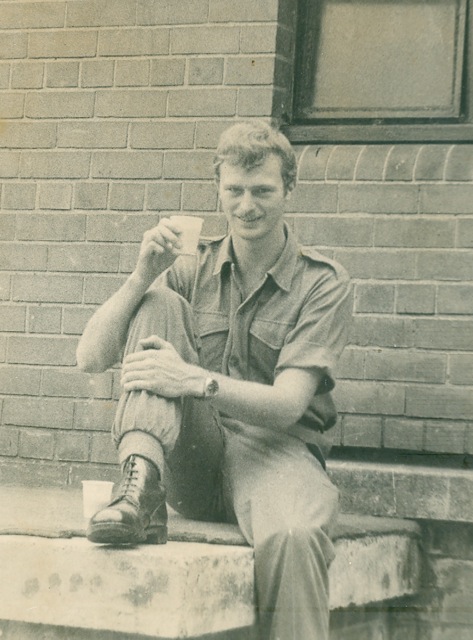 In 1982 he was selected to serve on the Early Response Team and trained with them in Jamaica and the RCMP base in Ottawa, Canada. He also represented the Police Boxing Team against the Massachusetts State Police in May of 1982. I remember the call from the doctor telling me Richard wanted to speak with me to wish me a Happy Mother's Day before they took him in to surgery to remove his spleen! Thus came his light duties and a stint at the Police garage repairing/painting police cars and his first Parish Constable stint in Pembroke.

Richard was Santa Claus for the Police Association Christmas Party in 1982 when Melissa was one year old. From the time he stepped off the fire truck and said his first "Ho, ho, ho", Melissa kept calling Daddy, Daddy!!! She recognized his voice despite the red suit and white beard - she has never been afraid of Santa as a result!

He represented the Police in November of 1983 at a Tourism Trade Show in London where he donned his Bermuda shorts! He later commented he should have worn "long pants" but did an outstanding job as a tourism ambassador.

Newspaper article on Richard's visit to the Tourism Trade Show in London, 1983.

In August of 1985 he began one of his favorite jobs in Narcotics – dog handler with Galen, a beautiful Golden Retriever, who he adopted and trained with the Maryland State Police. 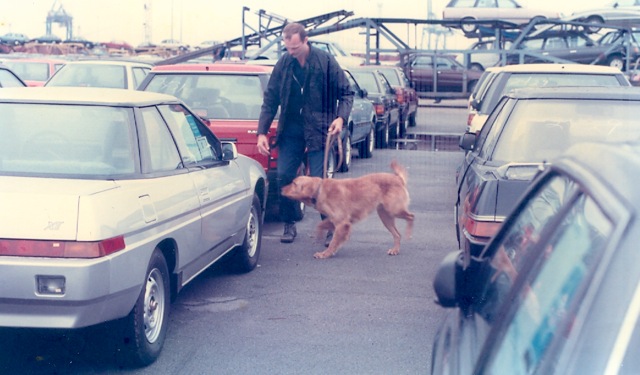 They made quite a pair entertaining tourists and flight crews while doing their job. Galen was so well behaved that one time Richard was half way back to Prospect when he realized Galen was still at the airport where he had told him to "stay"! When Galen retired, he was adopted by close friends, the Houghton's in Southampton so Richard was always close by to visit him. He also worked with Bear, another Golden Retriever as a school liaison for the Police.

Next it was time for a little "Parish Constable" work. One of the most amusing memories was a result of having tea with one of his parishioners when the tea cup fell into his lap. He promptly excused himself and rode his motorcycle to the hospital to explain the suspected burn. They handed him a bowl of ice and suggested his jewels would feel more comfortable "on ice"!!!

Richard in the birdcage with young Richard and Melissa

While serving in CID, he and an associate came up with a plan to catch a bag snatcher that had been stealing from tourists while playing golf on Belmont Golf Course. It took a couple of days of whacking their way around the course but it paid off as they chased down and captured the culprit – all in a day's work!!!

For nearly 9 years, Richard served at Com Ops answering 911 calls and as radio dispatcher. Many police knew his voice and also knew he would do everything he could to ensure their safety. One of his biggest disappointments was his inability to save his fellow police officers during Hurricane Fabian as he talked to them for hours while they were stranded on the causeway. His Com Ops career ended as a result of him being unable to confirm or deny reports of a rogue wave off Somerset. He decided it was better to be safe than sorry.

From there he served with Judicial Support and Corporate Services until he took ill in early 2009. His file confirms his good conduct, honesty, hard working, reliable, courteous, trustworthy nature along with his constant dry humor. He served 29 years under 8 commissioners. Never would he have been as proud to be a Policeman as at his own funeral as he watched from above to see his fellow officers escort him to the church, fill the church to capacity, come out of their offices to salute his last passing as the motorcade took him to his final resting place at the Prospect Hill Garrison Cemetery to be buried in the police grave. And they continue to honor him annually at the Police Memorial Service as part of Police Week.

Special police friends over the years include Inspector Linda Perry, Paul Singh, Ian Coyles, Ian MacMillan, Clive Brown, Glendol Phillips, Peter Clark, Linda Laws and many, many more. He never spent a day in the hospital without a police visit.

Commissioner DeSilva thanked the family for loaning him to the Police for all those years. His family was honored to do so.

As Richard would say, he kicked the bucket, yucked his moorings, shifted his mortal coil, snuffed it, pulled his anchor, ceased to exist, cast his line ashore and met his maker – and was still proud to be Police Constable #446.