We normally feature photos from the more distant past in this column, but for a change here is one from the modern era. We wondered how many of our ex-officers can identify these  young men and women, and figure out what they are doing.   We hinted that one of our present Committee members is featured in the photo, and also an experienced senior officer who many of our colleagues will have served with.

Thanks to Phil Taylor we had no problem identifying the "senior" officer, Martin Weeks, who was just promoted to Assistant Commissioner, and former Sgt Corey Cross who is now on our ExPo Committee.

It was far more problematic for our "old" ExPo members to identify most of these "youngsters" bearing in mind that the photo was taken just 11 years ago in 2005.  Corey was very helpful but we have to take our hats (helmets) off to Sgt. Stephen Gunn for providing us with literally all of the details we requested - and more!

First of all, Stephen advises that the photo is of the Police Support Unit (PSU) led by then Inspector Martin Weeks taken at the rear of White Hill Field during Cup Match at Somerset Cricket Club in 2005.

Stephen has not only provided the names of everyone but has also provided their Service numbers and ranks, as well as listing those who are no longer with the BPS.  We have listed all of their names in the photo caption below, and Stephen advises that 8 of the officers are still serving while the following 12 have since left:- 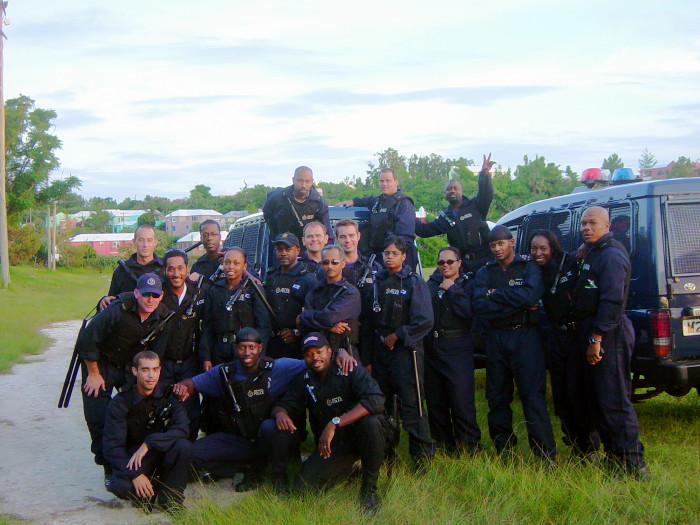 Editors note  -   For many years the Bermuda Police would re-issue badge numbers once an officer left the Force, retired  or died,  but the policy now is to issue all completely new numbers