We have just received a much better copy of this photograph from our old friend Patrick "Pat" McBride which you can see below the one we first published.  Many thanks to Pat who clearly dug into his archives to locate it.  Pat also sent us a copy of a Royal Gazette sports article dated April 16th 1973 which I believe is the report on the match played on the day this photo was taken.  The article is headlined,"Teachers Shattered by Powerful Police" and provides details of the match in which the Police team enjoyed an outstanding victory over the arch rivals with a final score of 28-3 despite the police officers having just finished several weeks of working 12 hour shifts due to civil disturbances.  (I'm havinbg a problem scanning the article but will publish it below as soon at the problem is resolved.

Once again, many thanks to Pat for the photo and the article.

We are not handing out prizes for guessing that this is a rugby team photograph but we wanted to know what year it was taken,  what are the trophies on display, and who are the guys in the photo.  We also asked if you could if tell us which members of the team are no longer with us, and also which members were civilians, and where are those members who have left Bermuda to reside elsewhere?

This is not the clearest photo so we provided you with two blow-ups to assist you on picking out who is who. If you happen to have a better copy of it we would appreciate you sending it to us.

And it is a civilian member of the team, John Price, who has provided most of the informtation including most of the names, with one question mark as to whether the plyer 2nd from right on the front row is Paul Pedlow.  John is not sure about all the trophies on display but this was clearly a great year for the Police Rugby Team.

John points out that "Rummy" Lunn (The Godfather) and he are the odd ones out with a second XV shirt and that civilians (at that time) were Dave Lunn, Bill Nixon, John Price, Tom Gallagher, and Paul Pedlow. And now residing elsewhere, to my knowledge are Bill "The Butcher" Nixon, Portadown, Northern Ireland; John Arlott, Leicestershire; Dai "Duck, Duck" Thomas, Staines, Middlesex ; John Price, Spain & Shropshire; Colin McKenzie, Canada; Colin Macdonald, West Midlands; Ken "2 rags" Vanthal, Barnet, North London.
Many thanks to John who regularly stays in touch with us. 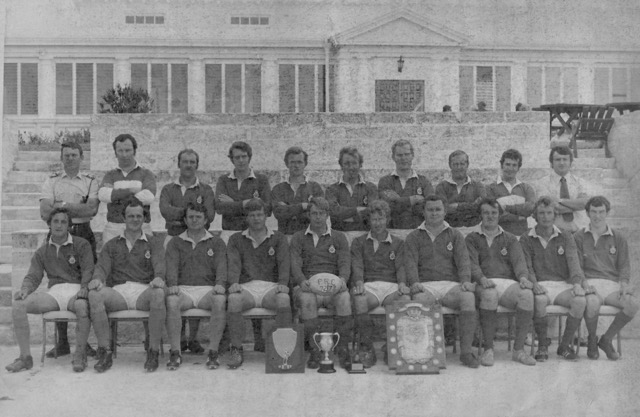 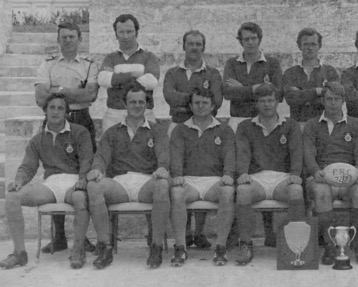 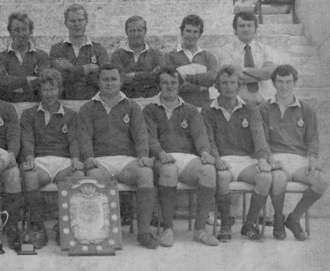 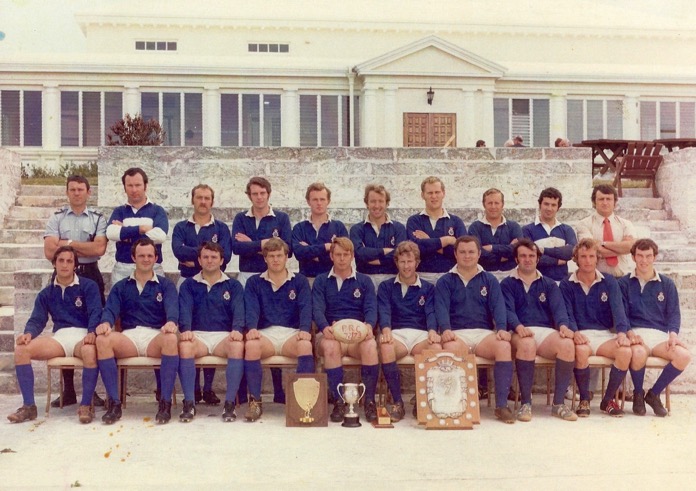 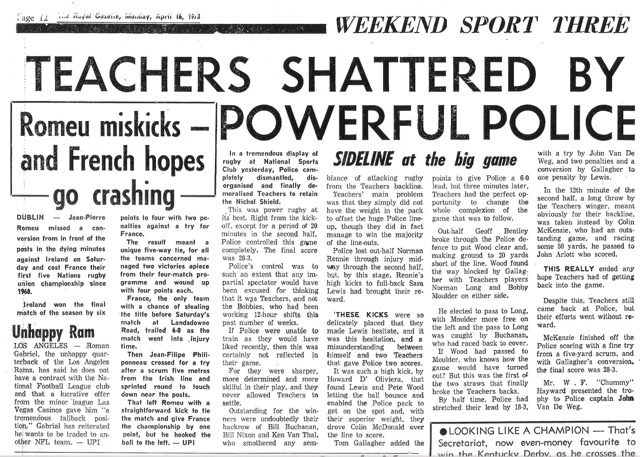