I was born and raised in Newcastle and joined the Newcastle City Police in 1967 at age 21. Back then police hand-held radios had not been introduced so my first year was spent patrolling the city centre and having to keep an eye on the police boxes or pillars – as well as having to call in from them twice an hour. If the light was flashing you would pick up the phone and receive instructions on a job etc. Fortunately, police hand-held radios came in but, sadly, many of the foot beats disappeared to be replaced by Panda cars with hand-held radio police officers.

One of the benefits of working the city centre was the fact that Newcastle United’s ground was located there – literally five minutes from downtown. In 1968 Newcastle had qualified for the Fairs Cup (now Europa Cup) and was drawn for their first ever European game against Feyenoord of Holland. Naturally the city was abuzz and the game was going to be a sell-out. The Chief Inspector addressed us on parade a few days before the match and, in a step-forward-all-those-that-can play-the-piano moment, he asked for volunteers to work it. As we were working 6am to 2pm and the match was on at 7.30pm it meant it was a good paid duty. You got to watch the match and also get paid. Everyone except me volunteered. ‘PC Coulthard’ he said ‘Why haven’t you volunteered?’   Missing the obvious clue I said ‘Well sir it is because I want to watch the match with my friends.’ I see.’ he said ominously. The day before the match he called me into his office and said ‘PC Coulthard your shift tomorrow is changed to 2pm to 10pm. You will be on duty outside the ground.’

I spent the entire game listening to them win 4-0! They later went on to win the Cup and it remains their last success.   I’ve never played the piano since!

I spent three good years with Newcastle (by then amalgamated with Northumberland and also Tynemouth) and thought I would like to experience overseas policing. I looked at Hong Kong, the British South Africa Police (Rhodesia) and Bermuda, but fortunately, ex school friend and former Newcastle policeman, Dave Ashurst came back on holiday from Bermuda and regaled me with tales of joy about what was available to young single policemen in Bermuda! Suitably inspired I applied and attended the interview by Commissioner George Duckett and Chief Superintendent Oliver Trott in London. Just ahead of me at the interview was Colin MacKenzie and behind was Stan Parr.   We ended up with re-issued badges 83, 84 and 85 while the rest of the successful recruit’s, Barry Higham, Bruce Bingley, ‘Paddy’ Ackroyd, Ian Fraser, Buster Brown, Paul Hendricks etc were given new numbers.   Unfortunately Stan missed his girlfriend too much and quit after a few months. I still keep in touch with Colin, Barry and Bruce.

When I arrived in Bermuda in June 1970 I was posted to Central onto Sgt ‘Buck’ Woods shift. Buck was an excellent guy and I always liked working for him. Also working on the shift was Howard ‘Stumpy’ Kirkham.   At that time Stumpy was living in a boat at St David’s that unfortunately sunk at the moorings with all his possessions on board.   Not appreciating the danger of things maritime Stumpy decided to ‘kip’ on one of the ferries one night shift. About six in the morning he was asked on the radio for his position. Back came the reply, “I’m heading west towards Somerset!’ 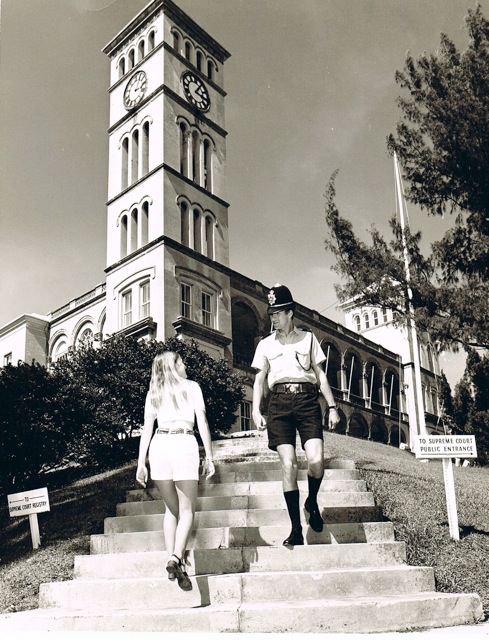 After a year I moved to Traffic and teamed up with John Baxter and, later Gordie Howard and Phil Lupson. Phil and I were fortunate to receive a Commissioner’s Commendation for arresting a couple of guys that had had been doing safe breaks. We got suspicious of a car late at night with ’L’ plates and, after a chase arrested them.

Although I liked Traffic I was very keen to go to CID. My wish was granted in 1974 and I arrived to work for Chief Inspector Clive Donald – to this day the best police officer I have worked for – and the excellent D/Sgt Ian Ganson.   Ian, with his army background, taught me some good field craft skills that I later put into practice i.e. footprints at the scene of breaking and enterings. I would ask CRO to photograph the footprints, and as most criminals didn’t often change their shoes I would often be able to match them up. When I left in 1976 CRO gave me a plaque with a shoe sole on it as a memento!

I met my wife, Jenny in 1971 and we later moved into the apartment above the Paget Dry Cleaners on Lovers Lane. Great spot for break-ins though and I managed to foil two attempts at the Dry Cleaners while living there. Talk about taking work home!

As with many police officers the thought of being unable to buy a home in Bermuda led us to explore other avenues. In 1976 I joined Peel Regional Police in Ontario, Canada and, shortly after arriving we had our first child, Claudia, later followed by Emma and Aidan.

Peel was an excellent police force and I enjoyed working patrols, Detective and Youth before going to the Fraud Bureau in 1985. My partner in Frauds was Andy Lavery and my sergeant was D/Sgt Ian Ganson. Hang on, didn’t I leave him in Central CID!   Andy and I were promoted to Detective and, as we actually lived close to each other, travelled to work together. One night, on travelling home, Andy’s small car broke down. We managed to contact his wife, Betty-Ann and she came down in the van to rescue us. We tied a tow rope to the small car and set off. Andy was steering the small car and I was driving the van. After a little while I noticed Andy kept flashing his headlights. Thinking he wanted me to drive faster I took off. It was only after we stopped that a stressed Andy told me he was trying to indicate to me to slow down!

In 1988 I attended a conference in Surfer’s Paradise, Queensland, Australia. I there met the head of the Royal Australian Air Force Police. I was fortunate to be offered a position as a flight lieutenant and, after weighing up the pros and cons, started with them in September 1989. I was initially posted to the base in Canberra, which largely functioned as a VIP base. While there I was supervising the exit of the Russian Prime Minister when a member of the Federal Police motor cycle squad peeled off and rode up to me. He took off his helmet and there was Mick Richardson ex Cycle Squad in Bermuda. Amazing! 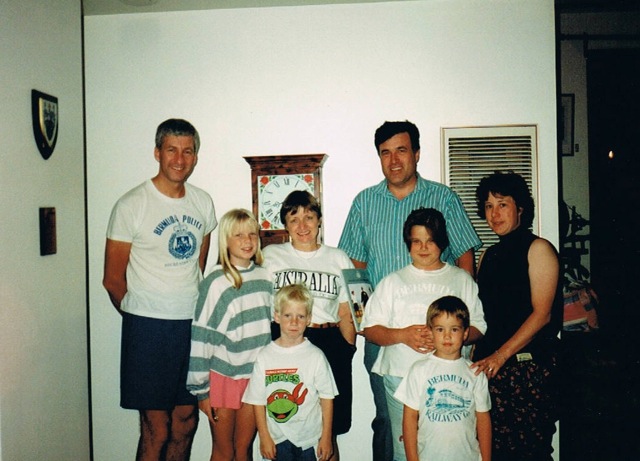 Dick and Mick get together with family

As an officer on a base you are often given secondary appointments. I was also the Counter-intelligence officer and the Unidentified Aerial Sightings officer!   Wow! Here comes my ‘Take me to your Leader’ moment!   Unfortunately I only had the one investigation. A guy claiming to have video of a space ship over Canberra! I know. It’s always New York in the movies! Ah well. I don’t know if it was my lack of success in the role or just reality kicking in but the role was abolished shortly after.

I did about two years as a Staff Officer before moving to Adelaide in 1993 to become Security and Counter-intelligence officer at the base there. Apart from one year as Officer-in-Charge Air Force Security and Investigations in Canberra I remained at the base until retiring in 2003 as a squadron leader. 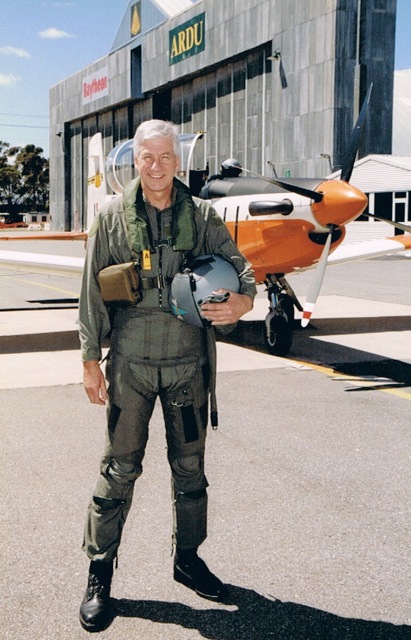 Since retirement I became a Security Vetting Contractor for the Defence Force and work from home. I turned 65 in May 2011 but plan on working another couple of years. 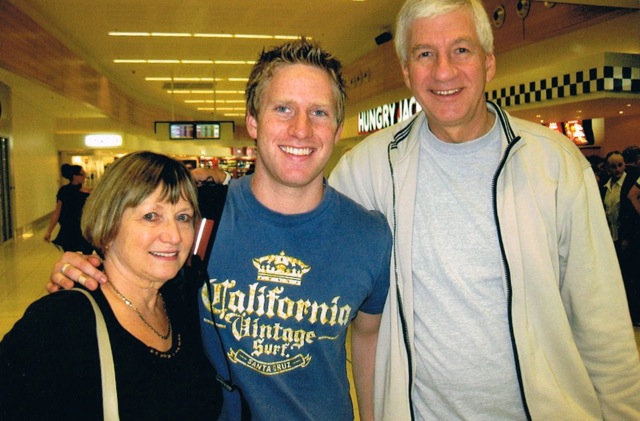 Family wise I have been married 37 years. My wife Jenny works for the Federal Government and is planning on retiring next year. Daughter Claudia is a Senior Constable in the South Australian Police Force, has a son and daughter, and is married to a police officer. Daughter Emma is a Sergeant in the Air Force and has two sons and a daughter and is married to an airman. Son Aidan is a barman at the Three Sisters in Edinburgh and loves the social life there. We retain hope that he will return and maybe join the police force here.

Since we have been in Australia Bermuda visitors have been Roger Brydon, Barry Higham and ex KEMH nurse Jenny Robins. 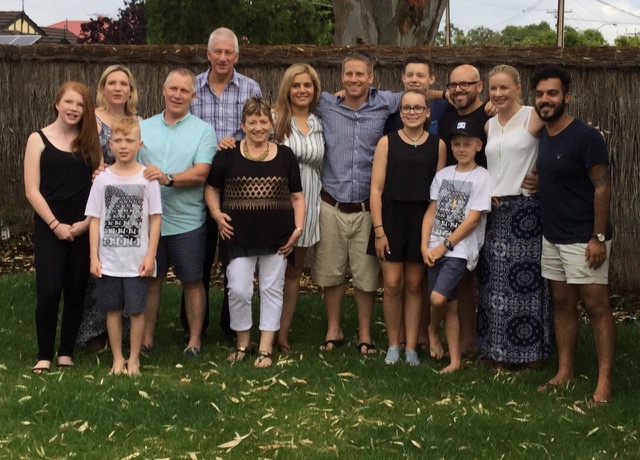 Richard and Jennifer with their children and partners, and their grandchildren
(l-r)  Holly, Claudia, Matthew & Barry SHERWOOD, Richard "Dick" &
Jennifer COULTHARD, Amanda & Aidan COULTHARD, Hayden,
Sophie, Ashton, Brad and Emma KAY, and a friend on the right.
Dick and Jenny last visited Bermuda in September 2012 and met up with some of their old friends at the PRC during their visit.  CLICK HERE to view a report  on their  get together in our Keeping in Touch column for 2012 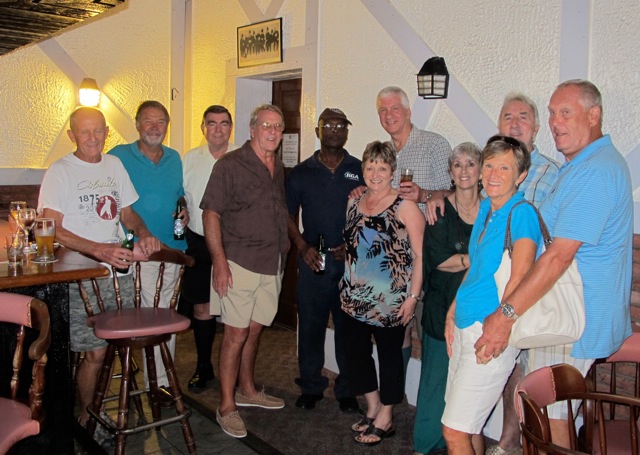 Ross Tims 4 years 3 months
Dick. Small world mate? Im still up here in Qld living in Godzone. Been working for Qld Hotels Assoc as their Training Manager (12byears). Liquor & gaming right up my alley. Hope all is well with you? Cheers Ross Tims

Ross Tims 4 years 3 months
Its amazing what you find on Mr Google! How are you Dick? I am still working hard up here in Qld. Work as the Training Manager for the Queensland Hotels Association - liquor and gaming right up my alley! Cheers Ross Tim's I

Bob Payne 9 years 6 months
Dear Richard and Jenny...we've only just discovered this website and it was good to see your lovely faces and identify your family ( previously only described in your letters). I must try and get our details sorted and displayed. Watch this space!! Best regardsBob and Pat Payne