The photo below was just published on the BPS official Facebookpage (25th January 2022) which was congratulating a certain very senior police officer, still serving with the BPS who  was celebrating his 34th year anniversary in the Bermuda Police Service.  We would like to know who the officer is, where and when this photo was taken, and most important, who are the officers in it.

You can view the article on the BPS Facebook page at  https://www.facebook.com/bermudapoliceservice/

We had an excellent effort by Davie Kerr who was able to name most of these officers, and recalled that they were all given consecutive numbers (509 through 517)  as per his comments below.

One of these new recruits was young P.C. Martin Weekes who has stayed the course of a long and distinguished career in the BPS and as of this writing is still serving as Acting Commissioner after 34 years.

We turned to Martin to assist us in identifying those present for the photo and he provided the names in the caption below the photo.  He also provided us with information about each of the men who joined with him in 1988 as follows:-

PC Palmer is still serving working in Forensic Support Unit as a CSI after many years in Outward Bound.
PC Agnew returned to UK after 1 year in Bermuda
PC Williams returned to the UK after around 8 years with the BPS
PC Groves retired as a Chief Inspector and works at the US Consul Generals.
PC Walters resigned as a Sergeant and returned to the UK after approx. 10 years.
PC Dixon returned to UK after 1 year.
PC Cosham retired as an Inspector and is still with the BPS seconded to the
Ministry of National Security as National Disaster Coordinator

Editors  note -  Then Commissioner Fred "Penny" Bean passed away in December 2018.  The Late Supt George Garrod passed away suddenly  in October 1988,  just a few months after this photo was taken.  Sinclair White and Tony "A.J" Smith are still very much with us. Sinclair resides on Island and we're not sure where Tony is these days but will check to see if we can touch base with him. 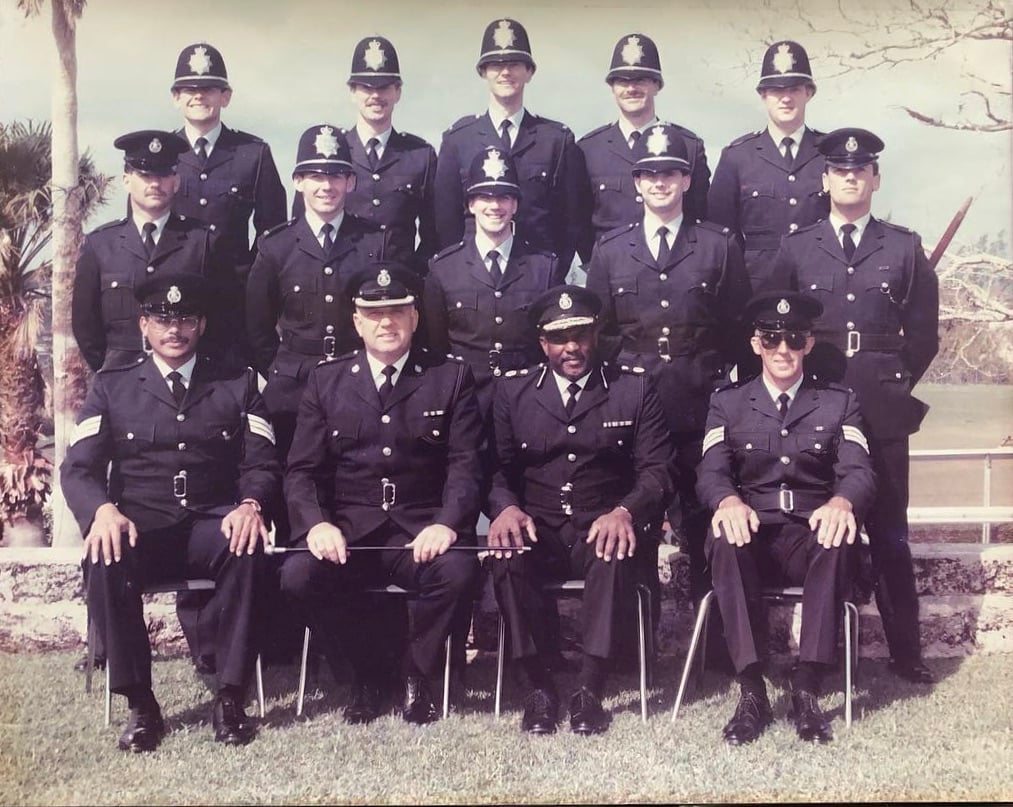 Davie Kerr 3 months 11 days
Re Tony Smith, he was one of the bosses (maybe even owners) of IBC when I worked there, but that was coming up 17 years ago now.

Editors note - Didn't know that about Tony (AJ). Does anyone know his present whereabaouts?

Davie Kerr 4 months 28 days
Ah: I remember the names and numbers because the numbers were all consecutive (509 through 517), but attaching the names to the correct faces may be less easy! In numerical order they were Jim Agnew, Steve Cosham, Neil Dixon, Simon Groves, Steve Palmer, Dave Steele, Jim Walters, Martin Weekes and John Williams, and I THINK that both Steves, Simon, and Martin are still in the job: at least, they were when I retired 21 years ago!
Back from L:- Martin Weekes, ?, Jim Agnew, ?. Steve Palmer?, ?.
Middle from L:- ?, Jim Walters, ?, Steve Cosham, Stuart Kirkpatrick (staff).
Front from L (all staff):- Sinclair White, George Garrod, Fred Bean, AJ Smith.

Editors note - Many thanks Davie. I've been in touch with ACOP Martin Weekes who is providing me with some additional information, including identifying everyone in the photo plus information about how long they served and who is still working with the BPS.