Here's another photo we received quite recently and is one of several of the same department taken at different times.  We figured it might not be easy to identify everyone because some are not members of the Police Service, so we asked you to give it your best shot and see how many you can identify,  which department were they all serving in, and exacrly where and when was it taken?  If you also have any anecdotes about this team or its members please feel free to share them.  It would also be most appreciated if those featured in the photo can let us have a few lines about where you are and what you're doing these days, especially if you have now settled elsewhere (could you also send us a recent photo?) 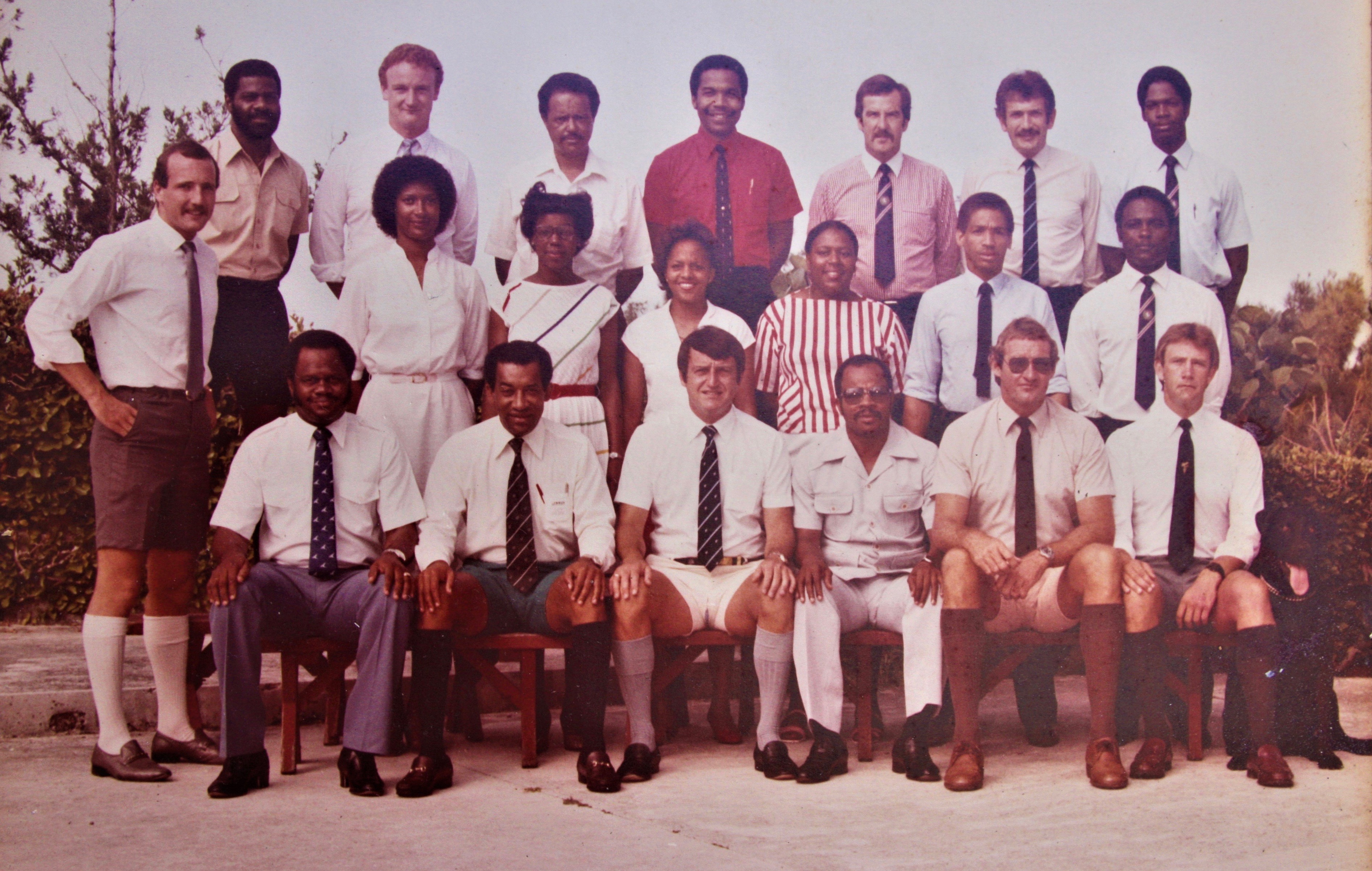 We have posted most of our comments in the "Comments" section below this article but we have received the following information from Dave O'Meara who happened to be sailing on the high seas with his wife Jan when we first published thjis photo.

All present in the photo were personnel attached to Bermuda Police Narcotics and is a mixture of Police officers, Customs Officers and civilian staff. I only have difficultly remembering the surname of one of the (CO’s) Customs Officers. So here goes,
Top row from the left,
CO Kenny Simmons, Mark Allan, CO Vernon Foggo, Mike Wyllie, Dave O’Meara, Steve Rollin, Zerphyl ( Zip ) Worrell.
Next row, - Mark Cartwright, CO Roxann (Roxie ) !!!!, Civilian Staff Carolyn Haynes, Bev Outerbridge, Cherie Bean, Alickson (Alex ) Severin, Dennis Gordon,
Front row, Eustace LeGay Farley, Winston Esdaille, John L. Williams, Norell Hull, Alex Arnfield and dog handler Ian Coyles.
The photo was taken in 1982, I believe early spring and not long after John Williams was made Insp. OIC Narcotics and he took over from Insp George Rose. Hope this help.
Dave has a copy of this photo at home and will confirm all the details, including the surname of Roxie when he returns home, after which we will add the caption to our photo.

Editors note -   Beverly Pitt (Outerbridge)  has examined this photo and says that Roxann ("Roxie's) surname is Eve. so we now have everyone named.

With regard to the date this photo was taken,  George Rose advises that he had been OIC Narcotics until March 1982 and after he  transferred to another department Insp Edward "Ed" Bailey became OIC for a few months before he left the Police to study law at which time Johnny Williams became OIC Narcoitics.  According to John Skinner's excellent List of Officers who served between 1879 and 1979 Ed Bailey resigned as of 20th Junt 1983.  He may have have finished a little earlier than that date if he had accrued leave,  but this photo was clearly taken during the summer months so chances are it was during the Summer of 1983. If anyone still has a copy of this photo with a caption can you please confirm the date.