We recently received this photo from one of our former Bermuda Police officers who settled in Western Canada after leaving the Island in the early 1960's.  We didn't have the names of these officers and wondered if you could help us to identify them, and the dog, and also tell us where, when and why it was taken.  The photo was sent to us by former P.C. Fred Beard who, after leaving Bermuda, eventually settled in Western Canada with his wife Marion.  Fred kindly sent it to us via Keith and Jade Lovel who visited Fred and Marion a few months ago.

We have also just received another photo taken from approximately the same era which will feature in our next Who, Where and When" column. If you can assist with this one you are welcome to check out the other photo which you'll find at http://expobermuda.com/index.php/who-when-where/780-boys-in-blue

We have had a few excellent email replies to this photo from some of our “seniors” as follows:-

Editors note - I don’t believe that is either Brin Jones or Mike Kelly).

Freddie Aubrey - “If my memory serves me correctly, front row kneeling is Robert 'Bob' O'Shea (1st on left) and Brian Flook (2nd on left). Back row left to right The redhead unknown, “Boob” Travis, Willie Woods, The blonde I remember the face but the name slips my mind, and Sgt. Arthur Rose. I remember these guys from St. George’s Police Station and the Traffic Department. If this photo was taken in the year 1960, it had to be St. George’s.

Keith Lovell -  Willie Woods is 3rd from left on the back row.

Mike Burke -  “I remember all but one and a couple of first names. Maybe Brian Flook could name him & fill in other information.

Editors note - It was great to have the above input from “Buck” Woods , Mike Cherry,  Freddie Aubrey and Mike Burke. I was also sure the guy with the dog was Les Waddell, but Mike Burke is sure it was Jeff Sanders.  What do you all think?

Mike thought that the guy 3rd from the left on the top row was Ken Bent, but Ken did not arrive in Bermuda until after me in 1964. Freddie has identified this guy as Willie Woods and I think he’s spot on. I still see Willie Woods travelling on the bus between Hamilton and Wilkinson Avenue and will try to catch him one day armed with the photo to see if he can confirm it’s him.

The only other person not identified by Mike Burke is the guy kneeling front row left next to Brian Flook, and Freddie identifies him as Robert “Bob” O’Shea.

I’ve now posted what I believe are the correct names under the photo but would ask you all to double check it one more time to see if you all agree.

Identifications finally confirmed -  Following publication of the above details we received a further email from Mike Burke which I believe clears up any doubt about whether the guy with the dog is Les Waddell or Jeff Sanders.  Mike advises that Les Waddell never worked in St. George's while he was there but Jeff Sanders definitely did so around the time this photo was taken.  Jeff's ex-wife Lita Kendall was asked if she could confirm whether it was Jeff in the photo and she's almost certain that it is.  In addition, I just checked Jeff's file in the Police Register and see that Jeff joined the Bermuda Police in September 1960 and was immediately posted to Eastern Division (St. George's) where he remained until 1962.  I think we can conclude that it is definitely Jeff in the photo.

Mike also wrote that the dog in this photo is NOT "Bashful" who was Ken Goosey's dog.  "Bashful" appears in the other photo of a similar group of St. George's guys (see at http://expobermuda.com/index.php/who-when-where/780-boys-in-blue

Mike says the dog in this photo is "Marcus" who had been hanging around the St. George's Mess looking for a home and the guys took him in.  It appears that stray dogs took a liking for police officers during this era as personified by the story of "Trusty -  Nobby's police dog" which you can read about at http://expobermuda.com/index.php/lia/106-trusty-qnobbysq-police-dog 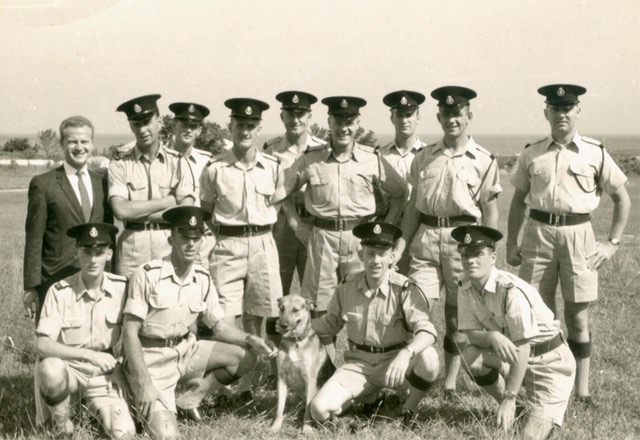