This photo surely gave us a nostalgic glimpse of the past on many levels!  We want to know who is in it, especially the gentleman in the red and white outfit and all his helpers!  And we also asked what you could  tell us about the two buildings in the background, and when this photo was taken?  We provided you with an enlargement to assist in recognizing those present.

It didn't take long to come up with all of the answers although we're not certain about the exact date it was taken, probably in 1985.

It is, of course a photo of members of the Marine Police taken on the dock at Barr's Bay Park directly in front of the Marine Police Station which served as Shore Patrol Headquarters in the days when we had U.S. Forces and others "invading" the Island!  The pink building in the background is the Bermudiana Hotel which has seen been demolished and replaced by the Ace and XL buildings.

The four officers standing together on the dock are Paul Cranage, Larry Dean, Perry Fox, and Ralph Lindo (who finally retired about a year ago).

Officers on the boat are (l-r) Wayne Ingemann, Mike Shaw, Mark Bothelo, Huron Vidal, Reggie Horseman,  the irrepressible Howard "Stumpy" Kirkham playing Santa Claus, Phil Every, Andy Wright, and Alan Gorbutt.  I suspect that if we asked this crew they would say that those were the glory days of the Marine Section.

The photo was kindly supplied to us by Mark Bothelo who is now retired from the Service and was doing some clearing out of old materal.  If anyone wishes a copy please let me know and I will send you a copy in higher definition.  Unfortunately, this is about the maximum definition I can post on the website. 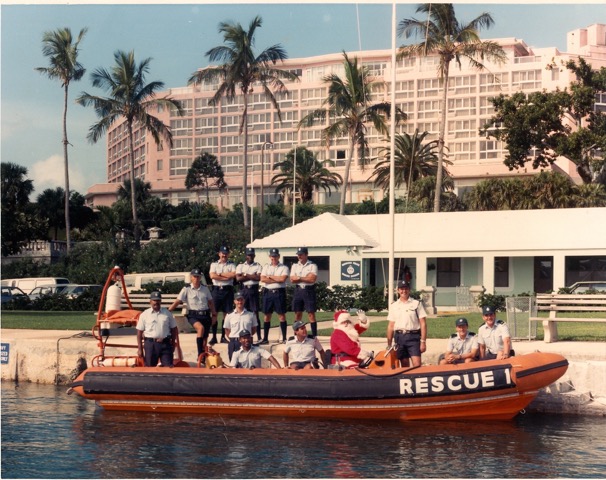 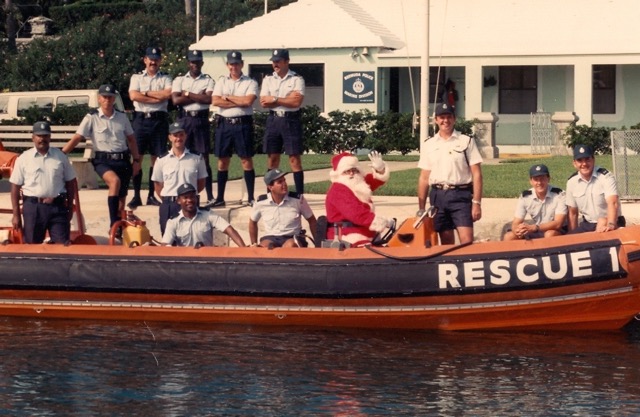