These gentlemen may not have been contenders for "Sportsman of the Year" awards,  but they were champions in their own right, although one of them didn't have very far to throw if he leaned forward!  They were a very successful darts team from Western Division and the photo was taken circa 1980 at the Somerset Police Mess.  We believe we've been able to correctly identify everyone in the two photos except the man who is partially hidden behnd "Big Mike" in Photo.  Their names are listed below.  We are not sure of thr exact date but we know that Dave Barber was transferred to Western Division in September 1980 as a Detective Sergeant, and became OIC Western at the same time.  We also know first-hand from Dave that he was promoted to Inspector OIC Western by then Commissioner L.M.  "Nobby" Clark on Christmas Day, possibly the only promotion ever made on 25th December in the history of the Bermuda Police! 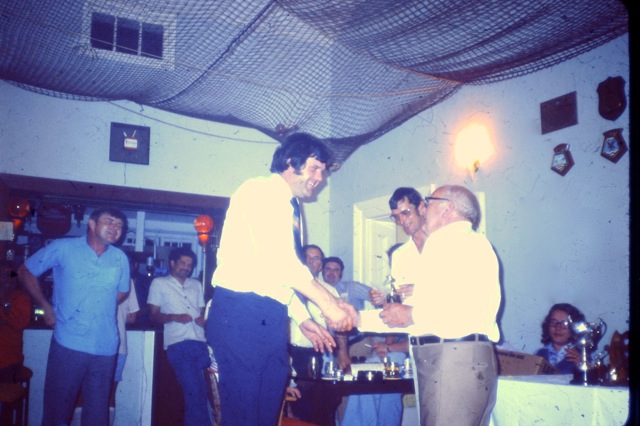 We heard separately  from both Gerry Lyons and Dave Barber today who have cleared up most, if not all of our queries.

Everyone is in agreement that those in Photo 1 (l-r) are “Big” Mike Parris, Keith Midgeley (then a Prison Officer), Pete Counsell, Dave Barber and  Gerry Lyons.

Regarding Photo 2,  Gerry confirms that it is Louis Griffiths next to the bar, and the guy in the corner is Ken Gordon who was a male nurse in Her Majesty’s Prisons.  Gerry says the guy presenting the prize to Big Mike is Ken Gordon, and he thinks the tall guy with glasses between Mike and Ken Gordon is Steve Shaw but he’s not 100% certain.

Dave Barber confirms that Dave Brooks is presenting to Mike Parris,  that the guy in the far right corner is Ken Gordon, and he identifies the tall guy with glasses as John Lunn, Chief Petty Officer at HMS Malabar.

I think it’s fair to say that no one was certain whether this was Peter Shaw, Steve Shaw, or someone else.  We believe that Dave is correct – and who better to know who would be frequenting the Somerset Police Mess!

Thanks Dave and Gerry.

Perhaps we should invite final comments about whether or not these were actually good darts players!